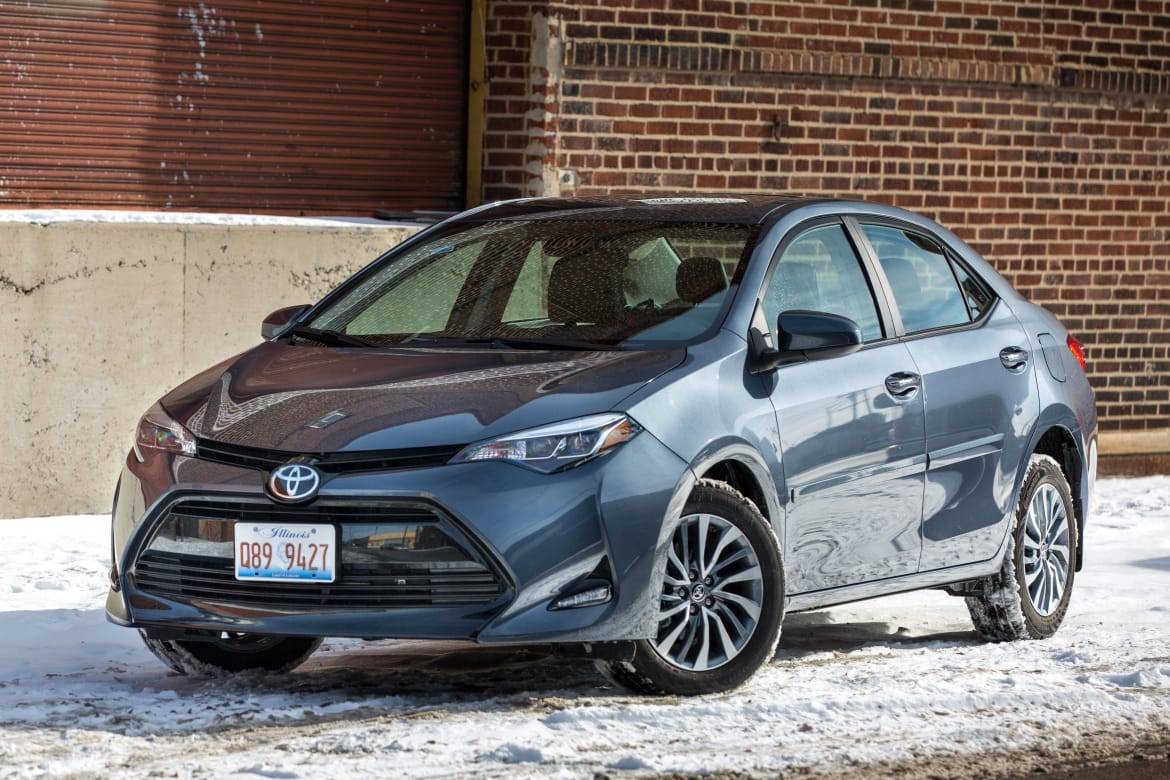 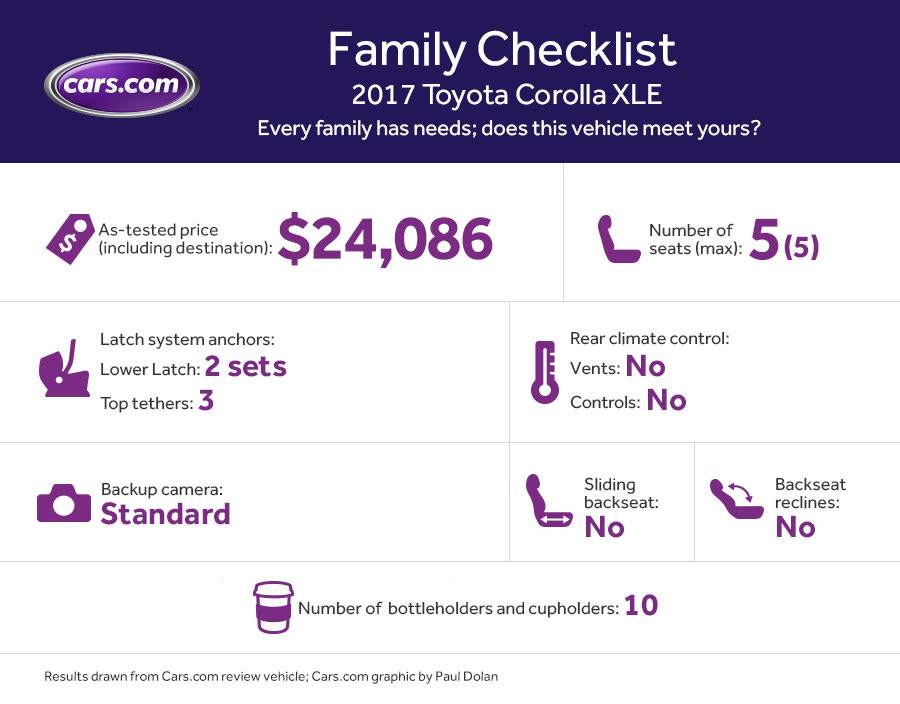 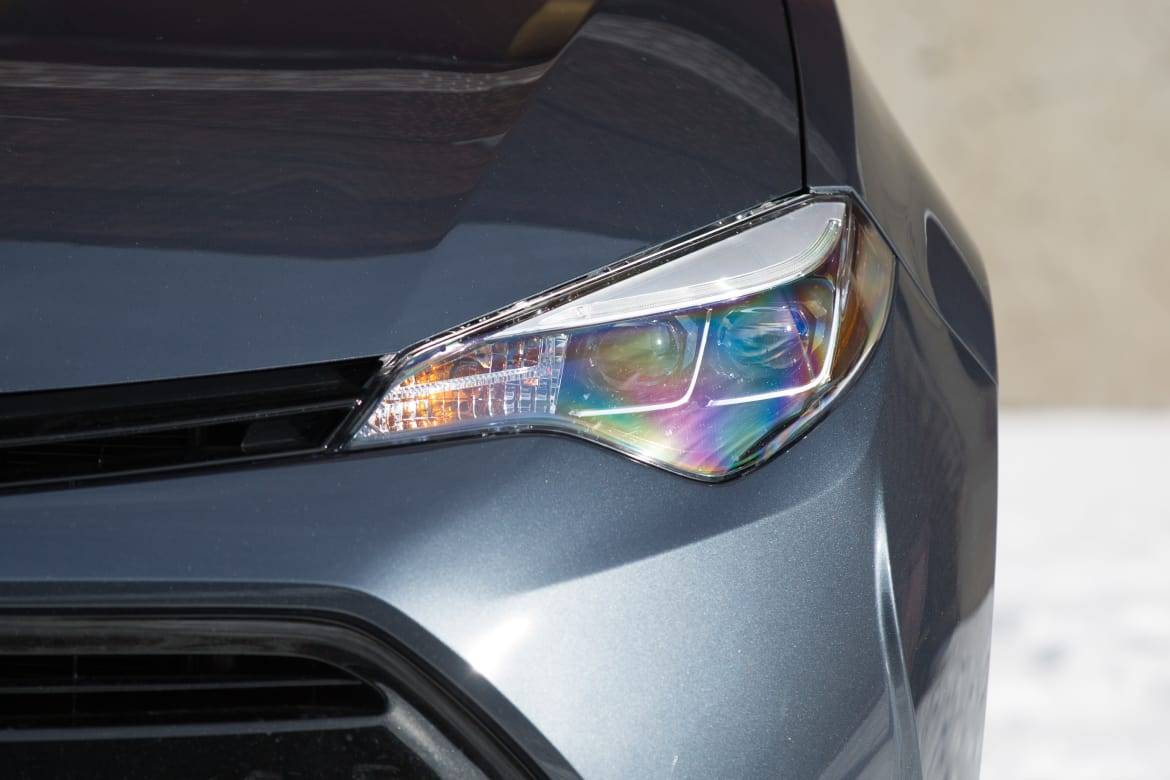 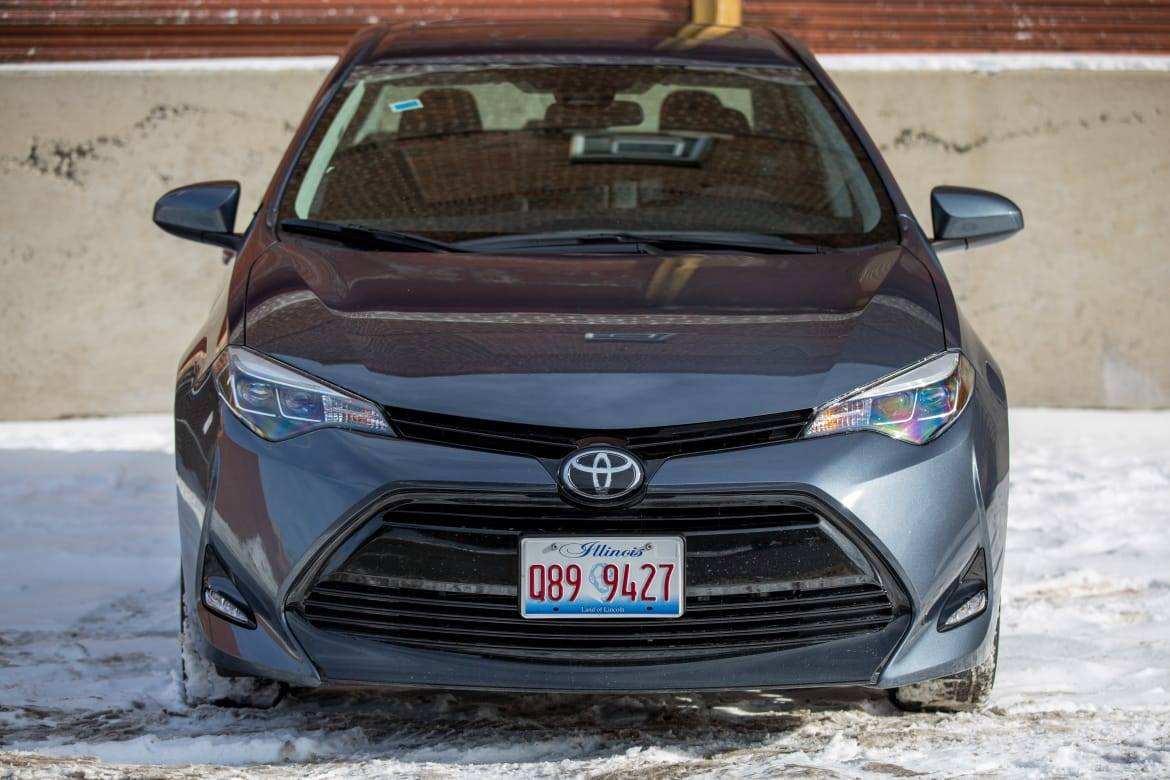 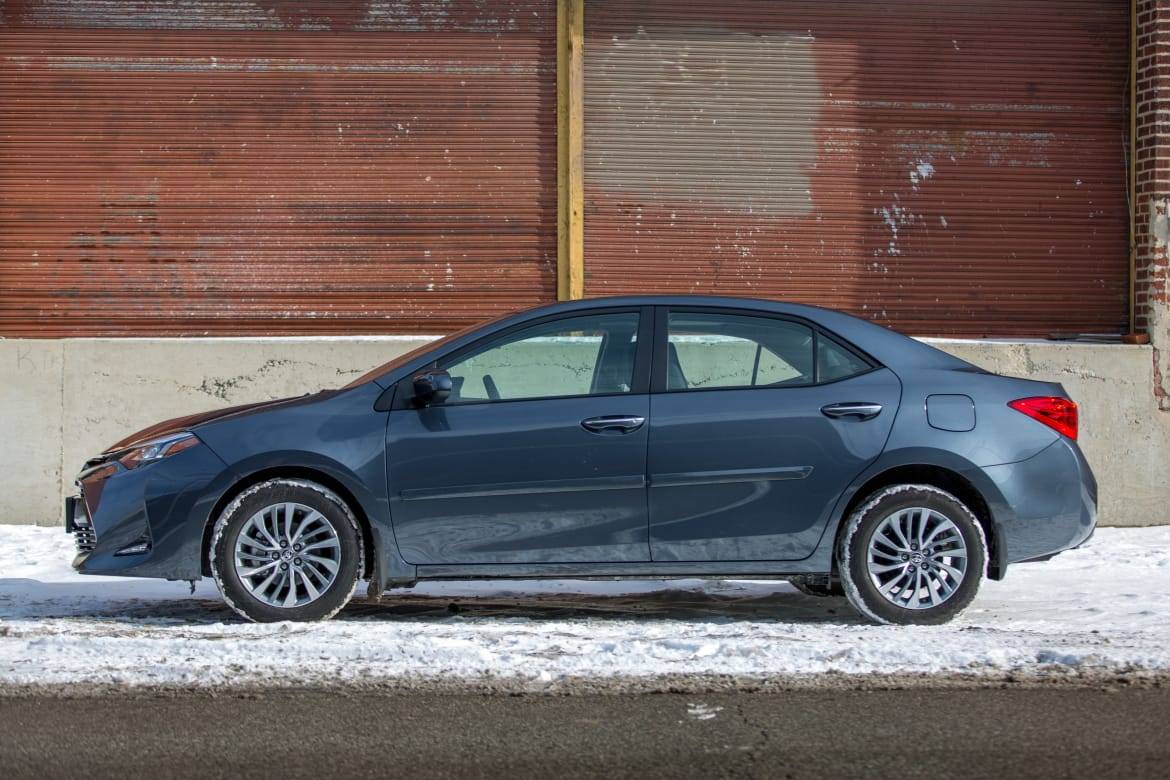 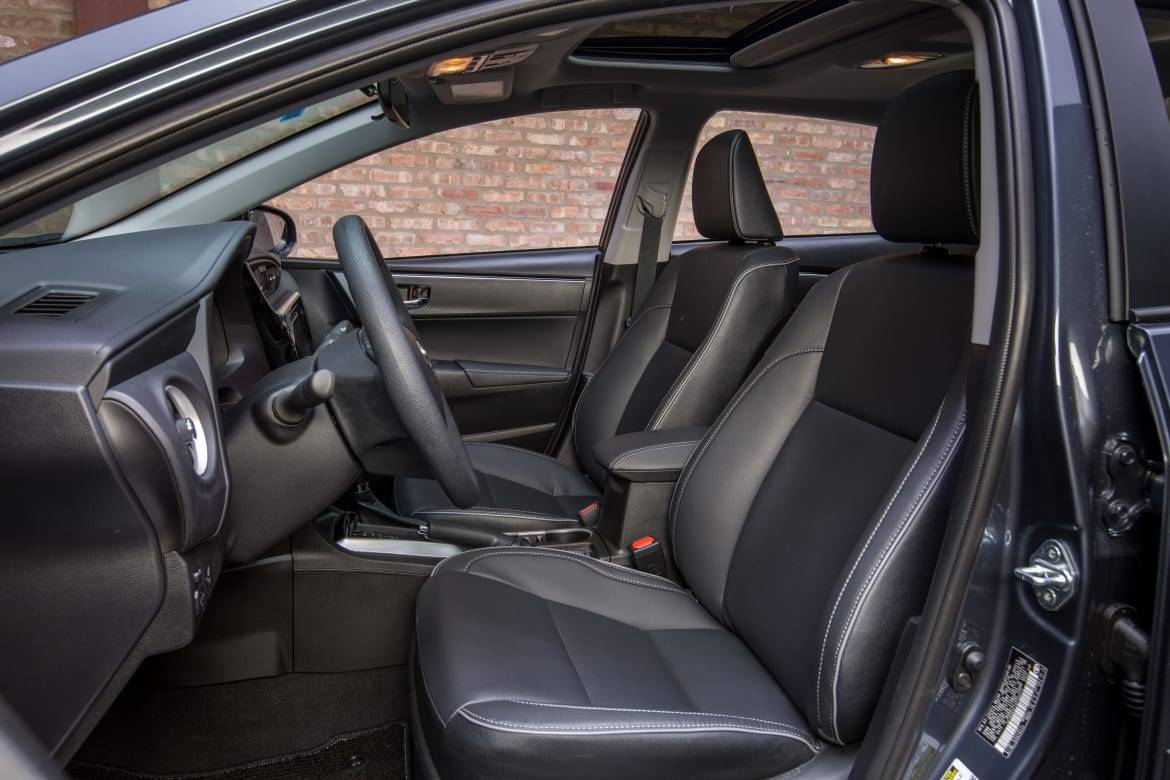 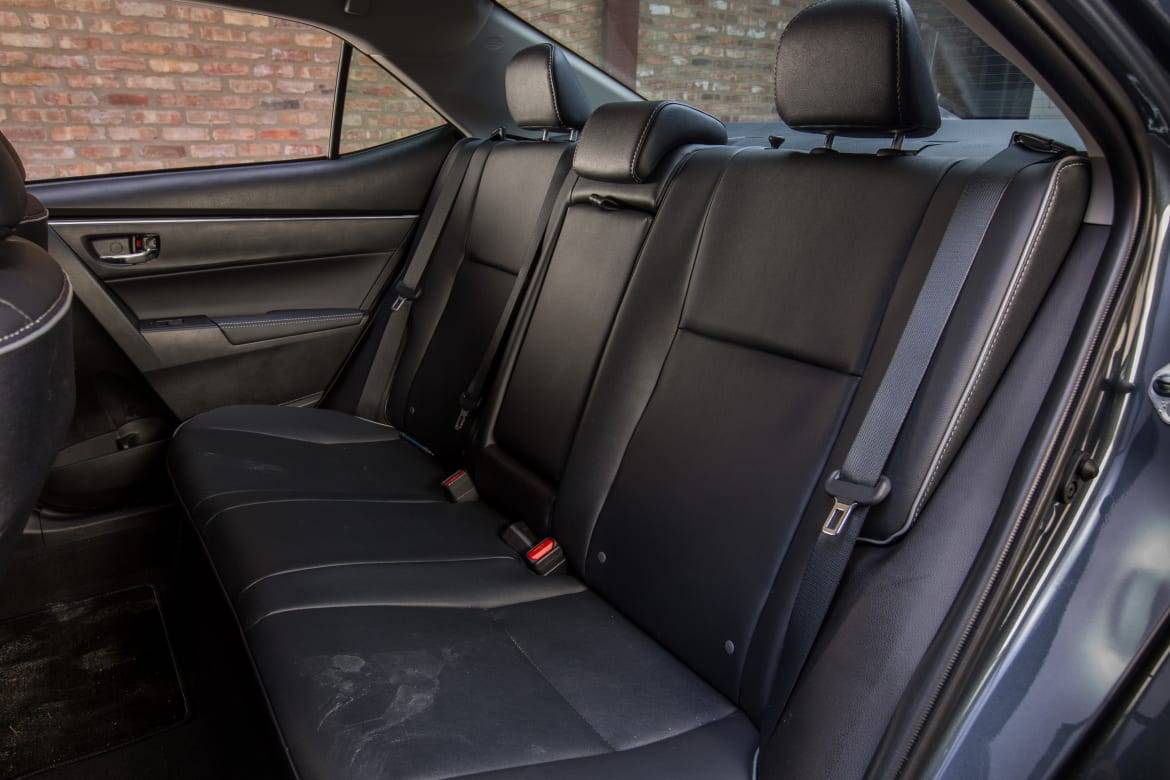 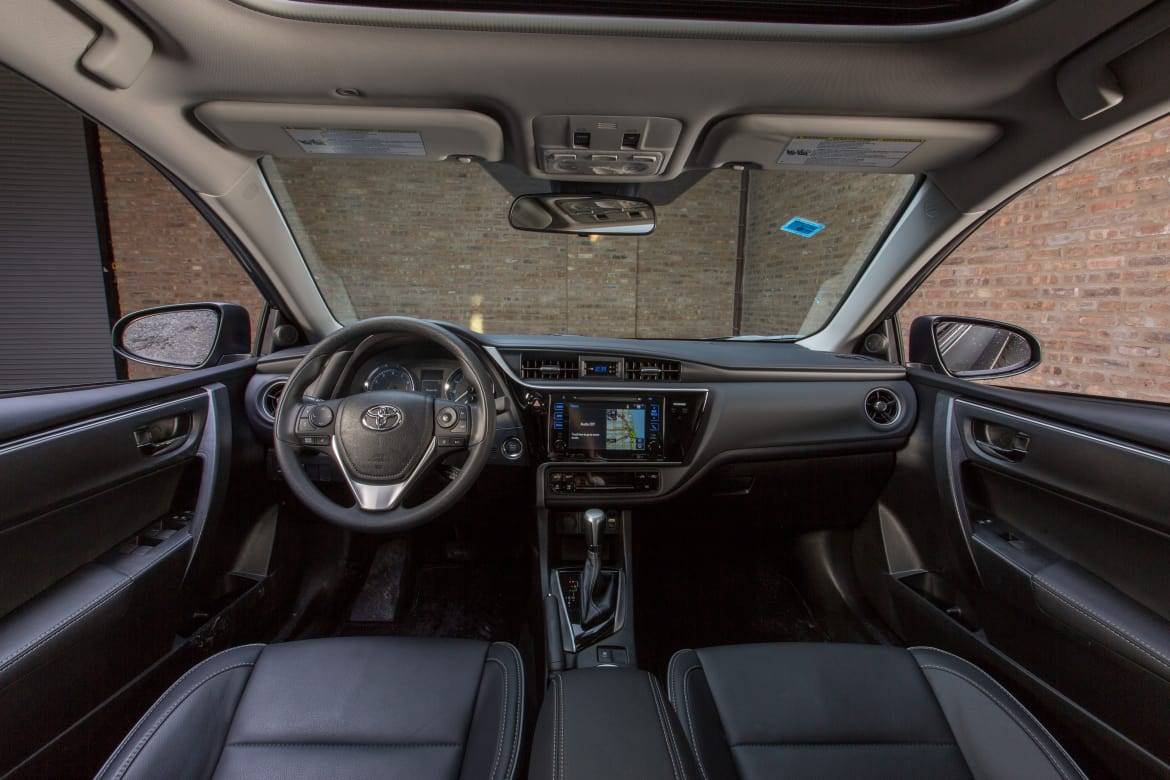 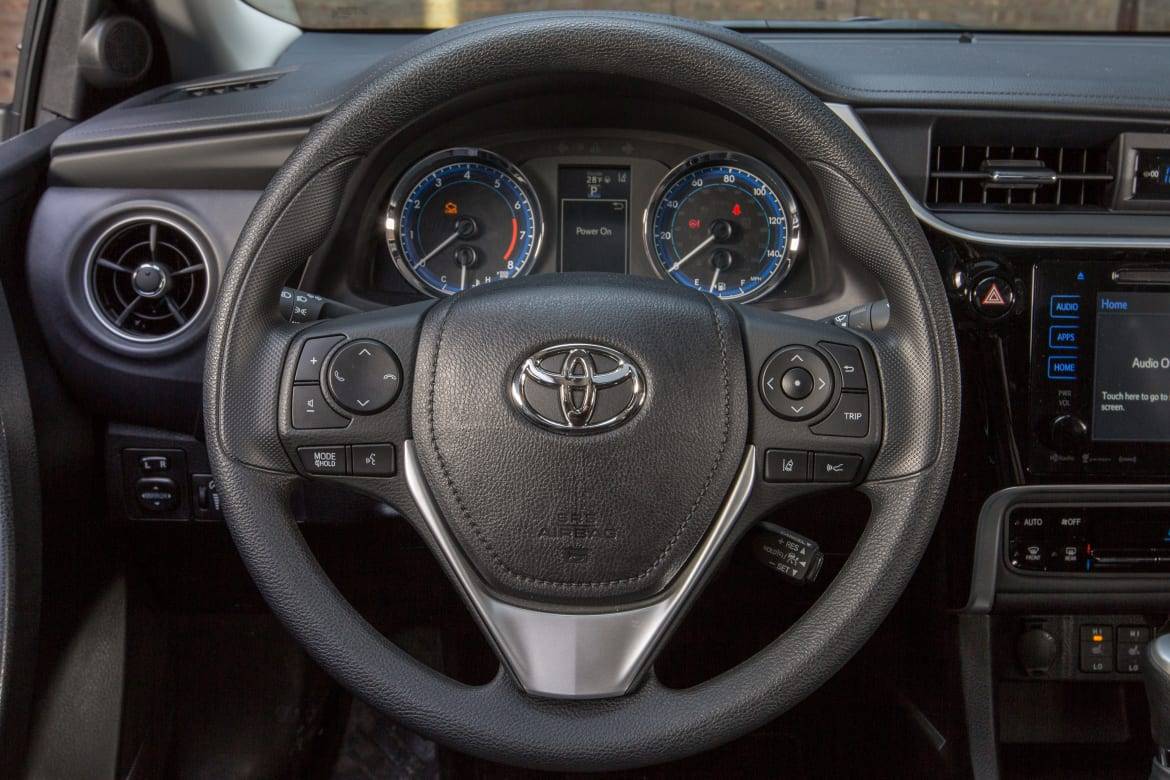 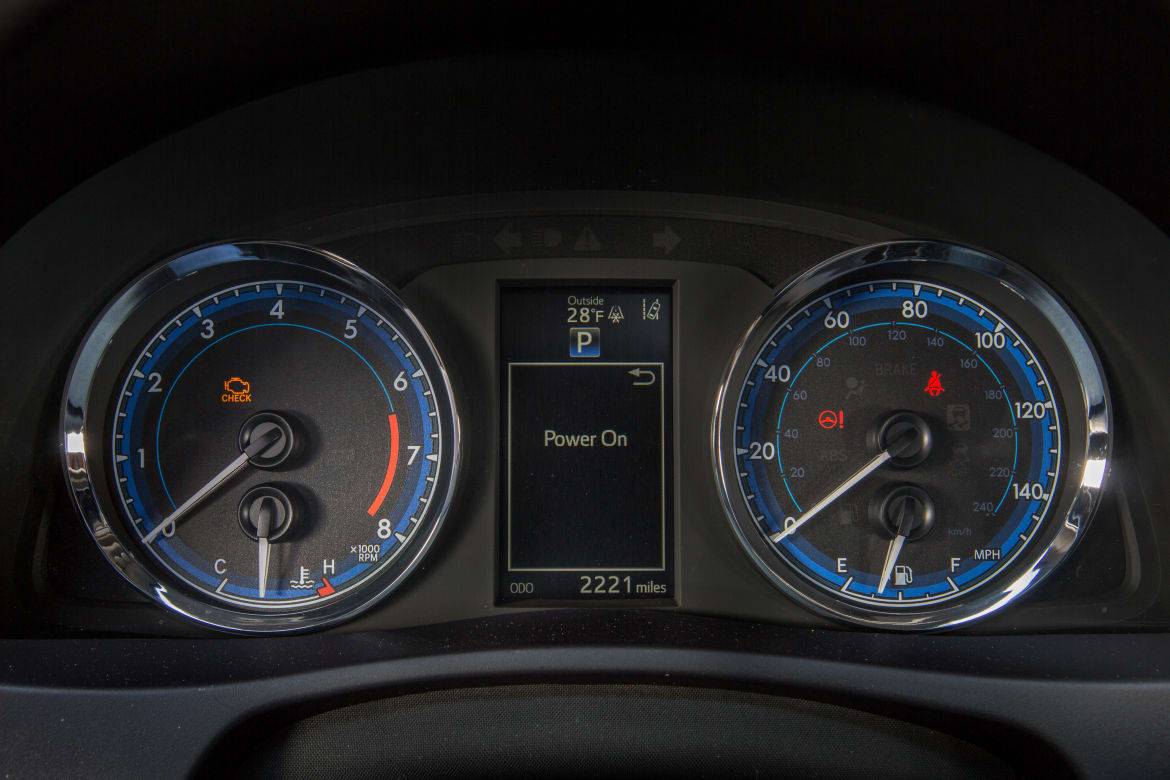 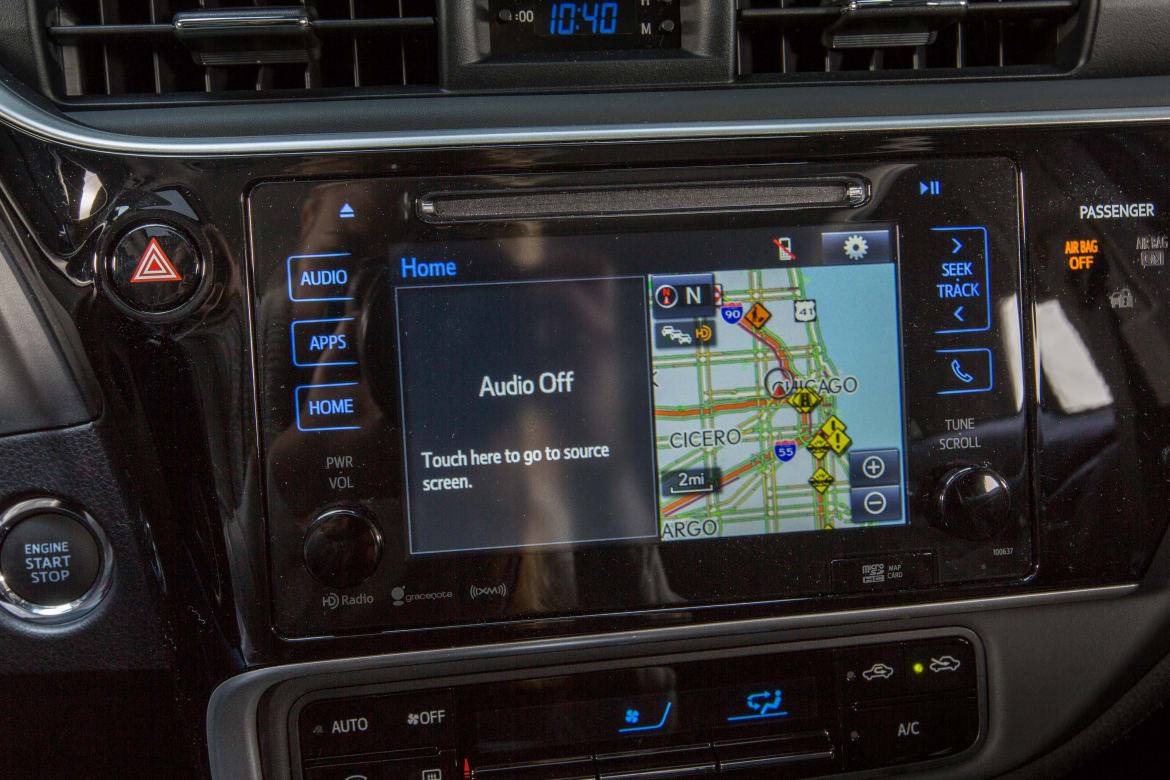 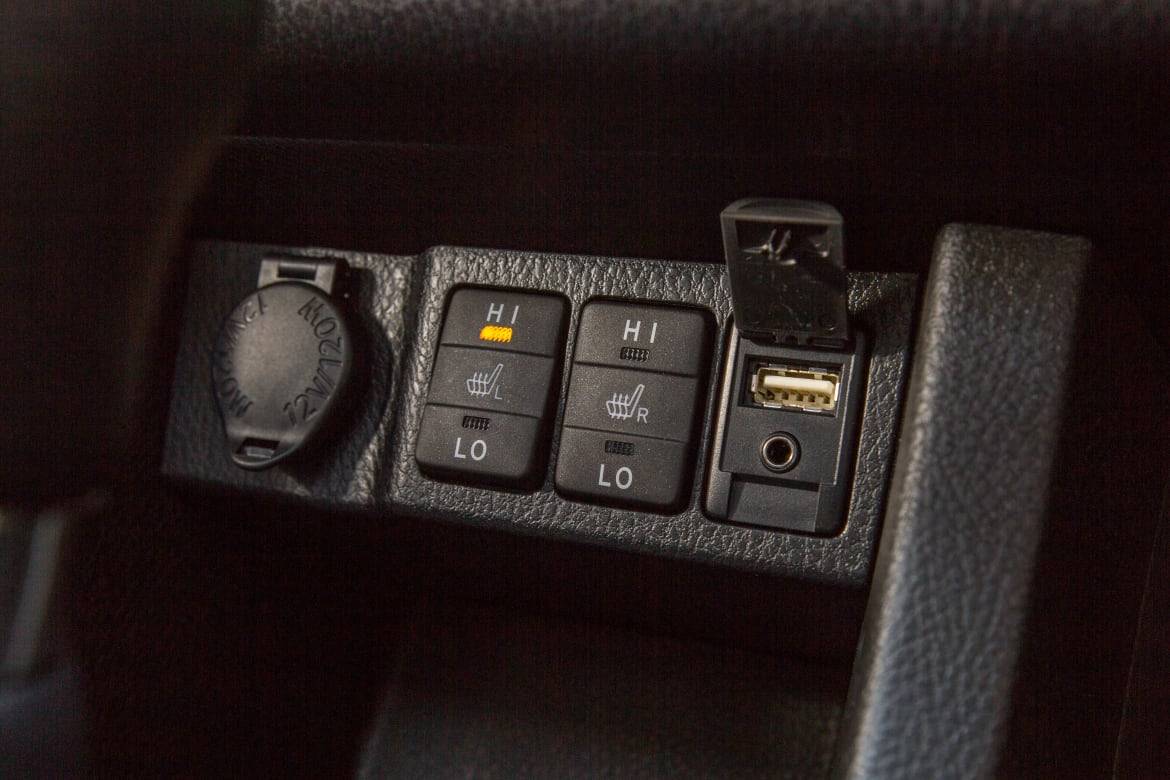 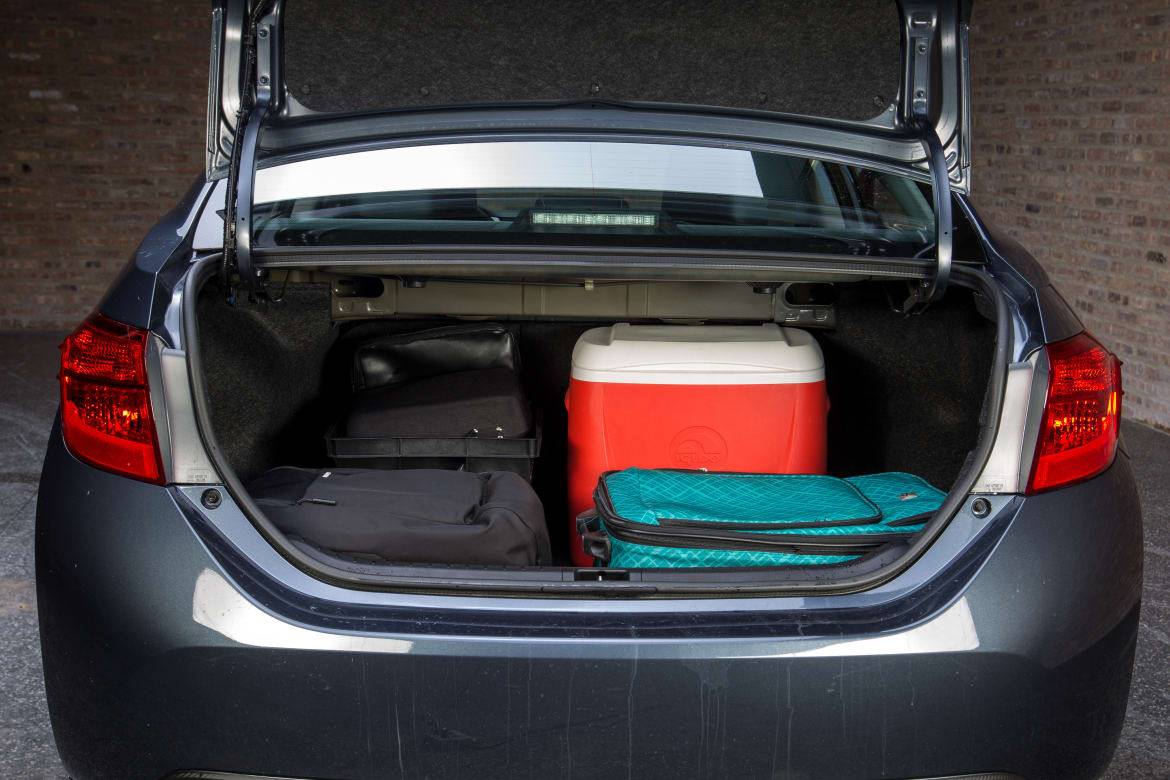 The Corolla is Toyota’s long-running entrant in the compact car class. It competes with models like the Honda Civic, Chevrolet Cruze and Ford Focus (see their specs compared here).

The Toyota Corolla base price starts at $19,365, including an $865 destination charge. We tested an uplevel XLE trim with an as-tested price of $24,086 and EPA-estimated fuel economy of 28/36/32 mpg city/highway/combined.

Toyota’s exterior styling has become more distinctive in recent years, and the Corolla shows how the brand’s look has evolved. With a massive lower grille, slim upper grille and slit-like LED headlights, the Toyota Corolla’s front end has an aggressive — if slightly cartoonish — look. It’s quite a departure from the rest of the car’s traditional styling.

There are aspects of the Toyota Corolla driving experience that don’t let you forget you’re in an economy car. Competitors like the Cruze, Civic and Mazda3, by comparison, make you feel like you’re driving a more expensive car.

The Corolla’s drivetrain is a good example of this. In most trim levels, a 132-horsepower, 1.8-liter inline 4-cylinder engine works with a continuously variable automatic transmission. While I like the CVT’s responsiveness, which helps make the most of the four-cylinder’s power, its persistent droning sounds are a drag. The four-cylinder gets the car up to highway speeds reasonably well, but like other compact car engines, it has modest power to spare for high-speed passing.

The Corolla’s ride quality also underwhelmed. Like many compact cars, the Corolla has a firm, controlled ride, but there’s an unappealing brittleness to the Toyota’s suspension tuning and you end up feeling more road imperfections than you’d care to. That said, the car is settled and confident at highway speeds and there’s minimal body roll in corners.

The car’s steering continues the trend. While the Corolla is easy to control and goes where you point it, the steering system’s torque buildup feels artificial — one editor thought it felt like a rubber band was being stretched as he turned the wheel — and there’s not a great deal of steering feedback overall.

While the base Toyota Corolla gets an EPA-estimated 32 mpg in combined city/highway driving, a high-efficiency LE Eco trim is rated as high as 34 mpg combined. EPA combined fuel economy ratings are similar for the Mazda3 (32 mpg), Hyundai Elantra (32 mpg), Cruze (34 mpg) and Civic (34 mpg) when looking at base-engine, automatic-transmission versions.

There’s good space for adults in the Toyota Corolla. The front bucket seats are comfortable, and large side windows provide good over-the-shoulder views when checking your blind spot.

The rear bench seat is impressively roomy, with more space than you might expect from a compact sedan. Legroom is good for taller adults, and the seat cushion offers good thigh support. While rear headroom dimensions are nearly identical to the Civic sedan, the Honda feels roomier; the top of my head brushed the Corolla’s headliner (I’m 6-foot-1).

Materials quality comes up short versus class leaders like the Mazda3 and Cruze; there’s too much hard plastic trim on the doors, where competitors have soft-touch surfaces for a more premium feel.

For the most part, the buttons and switches in the Corolla are where you’d expect to see them and work like you think they should. The one exception is the controls for the optional heated front seats, which are in an unusual spot near the front of the center console.

XLE trims get a larger, 7-inch touchscreen multimedia system, and ours also had a built-in navigation system and Toyota’s Entune App Suite, both of which are optional. Entune App Suite lets you use certain apps, like Pandora internet radio and Yelp, when your smartphone is connected to the system.

The touchscreen has high-quality graphics, which are especially apparent when viewing the navigation map. The backup camera image appears on the screen when the car is in Reverse, and image clarity is good.

The multimedia system has a few downsides. The system incorporates knobs for volume and station tuning, which is a plus, but their design — relatively flat and of the same slick, piano-black material that surrounds the touchscreen — makes them harder to use than they should be. It’s especially apparent when you’re wearing gloves.

Gloves present yet another problem: The touchscreen won’t recognize selections if you’re wearing winter gloves, and neither will the touch-sensitive controls on either side of the screen. It’s something we’ve experienced in other cars, including the Civic, but that doesn’t make it any less frustrating.

The 7-inch touchscreen multimedia system includes Bluetooth hands-free phone connectivity and music streaming, and my iPhone paired easily with the system. As of publication, the system does not support Apple CarPlay or Android Auto smartphone connectivity, instead making select apps available through Entune.

The Toyota Corolla has a 13-cubic-foot trunk. The Civic, Cruze and Elantra all have larger cargo areas that measure a maximum of 15.1, 14.8 and 14.4 cubic feet, respectively. At 13.2 cubic feet, the Focus’ trunk is about the same size, and the Mazda3’s 12.4-cubic-foot trunk is a little smaller. A standard 60/40-split folding backseat lets you expand the cargo area into the Corolla’s passenger compartment when you need more space.

Other storage areas include door pockets with an integrated water-bottle holder, an average-size glove box and a small bin under the front center armrest.

Few cars are more ubiquitous than the Toyota Corolla, which was first sold in the U.S. nearly 50 years ago. It’s built its reputation on fuel efficiency and dependability, and those remain hallmarks of the current version.

We’ve been surprised by a few new compact cars. The latest version of the Civic is a great-driving small car, while the redesigned Cruze is loaded with available tech features to keep you entertained and connected on the move. The Toyota Corolla’s wealth of standard active safety features is its big surprise, making a popular car even safer, but more polished competitors only make the Corolla’s shortcomings more apparent.