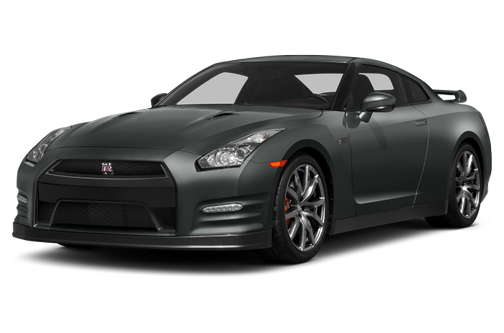 Our 2014 Nissan GT-R trim comparison will help you decide.

Though it hasn’t been completely redesigned since its 2009 U.S. debut, Nissan’s GT-R supercar has enjoyed incremental upgrades, mostly in engine output. For 2014, Nissan turned its attention to the GT-R’s chassis and suspension and added a new Premium Interior Package option that includes a hand-stitched red interior.

The GT-R’s price and performance put it in competition with the Chevrolet Corvette ZR1, Porsche 911, BMW M6 and many other high-performance models with two to five seats.

Exterior
The aggressively styled GT-R comes standard with 20-inch wheels and a rear spoiler. There are two trim levels, Premium and Black Edition, the latter of which adds black-aluminum forged wheels and a dry-carbon-fiber rear spoiler. The Premium’s wheels are described as near-black. Ultra-high-performance summer run-flat tires are standard, but all-season tires are optional.
Interior
The “2+2” GT-R has sculpted bucket seats, including two rear seats good for occasional use, but best left for children. The standard upholstery combines leather with imitation suede. Heated power front seats are standard. The Black Edition adds Recaro-brand leather racing seats. The new limited-edition Premium Interior Package dresses up the cabin with hand-stitched red leather for the front seats as well as red trim on the instrument panel, steering wheel, doors, armrests and shifter.

Under the Hood
After many increases over the past few years, the output of the GT-R’s twin-turbo 3.8-liter V-6 holds steady at 545 horsepower and 463 pounds-feet of torque for 2014, but the engine gets new fuel injectors that Nissan says enhance torque response in the engine’s upper rpm range and improve throttle feel. The engine is hand-assembled, and it’s now fitted with a plaque that bears the engine builder’s name. As before, the engine powers all four wheels through a six-speed dual-clutch automatic with paddle shifters.

Safety
Standard safety features include the federally required antilock brakes and electronic stability system. There are six airbags, including side-impact torso airbags for the front seats and curtains for the front and rear.

Simply the best car if ever owned. Thank God I was fortunate enough to have owned a few nice cars in my lifetime which were a CBA GT-R, 997.1 GT3RS, Ferrari 360, Ferrari 430, F80 M3, S2000, 911 Turbo S and a few more to mention. By far the 2014 GT-R checks all the boxes on my list I terms of power, looks, rarity, space, technology and build quality. I know some people may not agree with me on this and may say that the car is “lacking soul” but obviously they haven’t own a GTR before. I’m not looking for debate but just giving my honest opinion.

Exceptional performance for the money.

As a track car the GT-R is about as good as it gets; extremely capable in both drag and track situations. Solid build quality with excellent reliability in stock form makes it the best choice in its price range.

January 19, 2019
By TonyT from Rochester,MI
Used to own this car

Beautiful car and performance is insane. Looks aggressive exterior wise. This car will break necks :). If you want a a nice interior highly suggest buying 2017 and up

Rating breakdown (out of 5):
0 people out of 0 found this review helpful. Did you?
Show full review
See all 23 consumer reviews