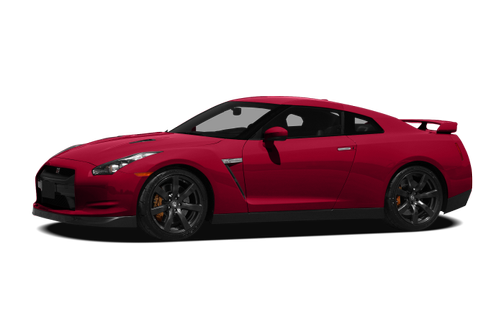 Our 2010 Nissan GT-R trim comparison will help you decide.

I finally understand why Godzilla stomps into a city and breathes fire everywhere. He just wants to be noticed.

When you’re the biggest, baddest Lacertilia on the block, people should run away screaming in fear. That’s how most people react to monsters.

But in Detroit, if it doesn’t wear a bow tie, blue oval or come with a cross-haired grille, people just don’t seem to take interest.

When Nissan Motor Co. called to tell me there was a spare 2010 Nissan GT-R sitting around and wondered if I could squeeze it into my schedule, I tried to remain distant.

“Well, I can try to move some things around,” I said in my most annoyed voice. Inside, I was ready to scream like Mothra had just landed on my sleeve.

Detroiters may not recognize this legendary coupe, but they should know that just a sighting in person — instead of on X-Box 360 — is enough to make young boys weep.

Nissan has kept strict sales limits on the super coupe known as Godzilla and Skyline since bringing it to the U.S. last year as a 2009 model. Nissan has made a number of changes to the 2010 model, which arrived in March.

First, Nissan marked up its price by $10,000 to $81,790 for the base model and $84,040 for the premium model, which includes $1,000 for shipping. It’s worth every penny. (Nissan also added 5 more horsepower to the engine, as if it needed it, and returned the brakes and suspension.) Space shuttle on four wheels

Just blasting off at any stop light pays the price for admission to this thrill ride. The GT-R explodes off the line. A combination of the electronically controlled all-wheel drive, super advanced everything and a 3.8-liter twin turbocharged engine gives this coupe super abilities. Really, it’s unreal.

It slashes through turns and lays waste to straight-aways. Two-thirds of its speedometer is illegal and every time you hop into it, you know, you just know, you’re going to break something. (In the 2009 model, one unfortunate breakage was occurring in the transmission when a few drivers used the vehicle’s launch control to blast off even faster.)

But that was in a small number of vehicles and Nissan says it has addressed the issue through some reprogramming. Even without turning off the electronic stability control, the GT-R launches like the space shuttle.

There wasn’t a passenger I took in the GT-R that didn’t walk away sounding like Neo after watching Morpheus jump all the way over to that other skyscraper.

Nearly everything you see the GT-R do on Gran Turismo, it does better in real life. Drop the game controller; life and art have fused.

But this car is so much more than just raw power — it’s the super smart bomb in the world of automotive ordnances.

Here’s just one example: The all-wheel drive system was created just for the GT-R. While rear-axle biased, it can split the power 50:50 front to rear. It includes a yaw rate sensor that can measure the steering angle and the car’s actual yaw and then adjust the torque bias to keep the car balanced. Please, just nod your head in appreciation because this is very impressive. Form follows function

From its graphic composite drive shaft to its massive six-piston Brembo brakes squeezing 15-inch rotors, the GT-R is pure science and performance to the nth degree.

Just look at it. There are so many sharp edges and corners that if you have kids, you should baby proof it in the garage. Every design element was created with a single purpose: performance.

There’s a reason the door handles are flush against the door (better aerodynamics), and the body is made up of carbon fiber, steel and aluminum (it’s lighter; thus, faster). Purpose replaces style with function, and that function defines the design. The slotted front fenders look modern, but they were designed to create more down force and keep the GT-R on the road at higher speeds.

Every edge cuts a sharp angle to make the GT-R look like a toy. Maybe that’s why so many Detroiters never gave it a second glance. It may not have that classic American fast car styling or rumbling V-8, but this car crushed everything I approached on the highway.

Three taps on the magnesium paddle shifters to down shift the six-speed dual clutch transmission, feel the slight lurch as the engine winds up to 5,000 rpm at 80 mph and then hit it. As a friend and I shot through traffic one day, he simply said, “This is like a fast forward button.” Heart monitor not included

Indeed. And the interior boasts the exact same understated, high-tech feel as the exterior. The navigation screen on the dash cants toward the driver. From there, you can program it to show six different gauges not normally displayed on the dash. But it’s not merely the oil temp or PSI to see the turbos kicking on. You can measure your lateral Gs, your braking percentage, your accelerator input and just about everything else. I was a little surprised it didn’t measure your heart rate or sweaty palms. There’s even a big stop watch on the screen controlled by a button on the steering wheel.

If there were ever a car that could feel like the Speed Racer’s Mach 5, it is the GT-R.

With a car this awesome, I really only wanted someone to acknowledge it. To understand what a great piece of engineering this vehicle is. I was ready to honk just to get people to look at me.

Normally, Detroiters have a deep appreciation for cars that goes beyond who builds what. There’s a love for the machine and the gears that make it go. But the GT-R only grabbed stares from a crowd under 25 — who knew the cartoon car and not the real one.

Finally, one day a middle-aged engineer walked up to me in the parking lot as I stepped out of the coupe.

“That the new GT-R?” he asked, smiling and shaking his head.

I started to say he was correct, but he kept staring at it, silently running the spec sheet through his mind.

I can tackle ANY driving situation with this car

1.) Its precise; With this auto I 'know" the road. 2.) Even with the Bridgestone's provided It is a tracking snow car. 3.) Passing power is spectacular; Too bad we don't have a real autobahn in the US. 4.) As for speed and curvy roads; pick your time, location and go with good visibility.!

Most fun and one fast car ever! Best supercar!

November 8, 2018
By Jed Rich from Stillwater, MN
Owns this car

This car met everything I always dream of having. The speed, the look, the style, the quality, the stability, the durability, the shape and size is so perfect. Nothing beats a Nissan GT-R regardless of what other say.

Even 8 years old this car still makes you smile from ear to ear. If you are a pompous, look at me kind a person-look elsewhere...this vehicle demands respect and does it in a stealthy, not so flashy kind of way and the kids fit in the back too!! I have a 6 and 4 year old and they love sitting in the back of Godzilla. Only knock I have is that even though it?s only 8 years old technology is prehistoric, yes it?s updateably but you want An honest review and here you go. One thing I would recommend if buying used, look into the service history. Differential, tranny service can get up there and if the bell housing needs to be replaced it could be quite exepensive-Still sigunifanctly less than servicing a Ferrari or Lamborghini.

Rating breakdown (out of 5):
0 people out of 0 found this review helpful. Did you?
Show full review
See all 13 consumer reviews