Overview Our Take Reviews Safety Warranty Compare View Local Inventory
View Local Inventory
Save
You have a full list! 15 / 15
Now is a good time to narrow it.
You've reached the most you can save: 15 / 15
To add more, remove at least one or narrow your list.
Narrow Your List
NEW
Take our quiz & meet the car you’ll love. 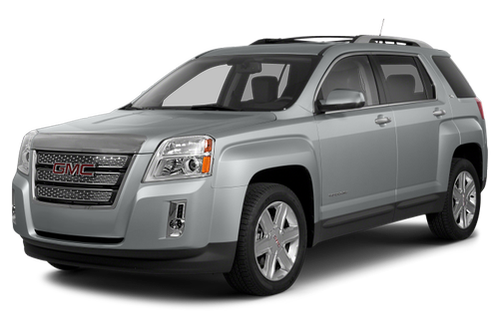 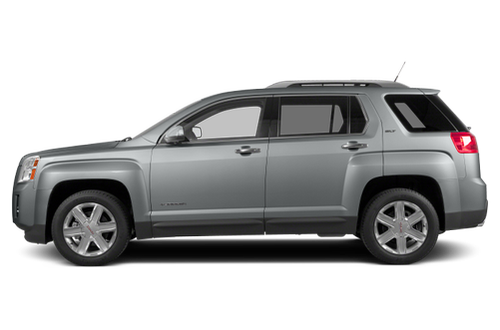 Change year or vehicle
$8,256 — $18,804 USED
32
Photos
View Local Inventory
No listings at this time Get the latest resale value

The 2014 GMC Terrain is a five-seat compact SUV that competes with the Toyota RAV4, Ford Escape, Ford Edge, Nissan Murano and Honda CR-V. It is offered in SLE-1, SLE-2, SLT-1, SLT-2 and Denali trim levels, all of which come standard with front-wheel drive but are available with all-wheel drive.

How Does the 2014 GMC Terrain Compare to Other Compact SUVs?

The 2014 Terrain's styling certainly separates it from the competition, but not necessarily in a good way – the trapezoidal grille and huge fender flares make it seem like GMC put a lot of effort into making the Terrain look edgy simply for the sake of doing so. That goes double for the Denali trim, which is extremely chrome-heavy.

The Terrain's 301-horsepower V-6 engine offers impressive gusto when you hit the gas, but it pays a price in efficiency. When equipped with all-wheel drive, the Terrain maxes out at an EPA-estimated 16/23 mpg city/highway, which lags behind AWD models of the Ford Edge (18/25 mpg), Nissan Murano (18/23 mpg) and Toyota RAV4 (19/26 mpg). The Terrain's base four-cylinder engine offers up a more respectable 22/32 mpg with front-wheel drive but with reduced power.

What Features in the 2014 GMC Terrain Are Most Important?

While the 2014 GMC Terrain is not what most would call a looker, and while its efficiency leaves much to be desired, there's a lot to like here if you can see past those issues. The optional V-6 engine has plenty of pep, and its handling feels extremely stable and secure – something worthy of note in a vehicle of this size. Visibility from the driver's seat is very good, and the Terrain makes excellent use of its size in terms of passenger and cargo space. However, while it's got plenty of great features, figuring out how to use them isn't the most intuitive experience.

Nice and roomy meets all of my needs.. My Grands love it... I love it!!! My salesperson Roy was great and on point.. Will recommend him to friends. Read full review

by Ms Edmonds from Suitland Maryland on January 15, 2020

The car was fine until a week later it started hesitating I called the dealership and of course they gave me the run around now saying it my responsibility the car has 9000 miles on it they should ... Read full review

The 2014 GMC Terrain currently has 0 recalls

All Model Years for the GMC Terrain

Certified child passenger safety technicians conduct hands-on tests of a car’s Latch system and check the vehicle’s ability to accommodate different types of car seats. The Terrain received the following grades on a scale of A-F.*
* This score may not apply to all trims, especially for vehicles with multiple body styles that affect the space and design of the seating.