After about a year and a half and more than 25,000 miles driven, we’re nearing the end of our time with our long-term 2021 Ford F-150 Limited hybrid. Before it leaves our fleet, however, we’ll have a few more updates to share, including a forthcoming report on how our test truck’s active air dam was damaged — again — and a real-world fuel-economy comparison with the redesigned 2022 Toyota Tundra. This time around, we’re documenting the details of a recent Ford Power-Up over-the-air software update our F-150 received via its embedded FordPass Connect modem.

We received a notification via the F-150’s infotainment screen that an OTA software update was available, so I tapped the Install button on the screen when I parked for the night. When I started the truck the next day, another notification window informed us that the functionality of the vehicle’s camera systems had been improved. 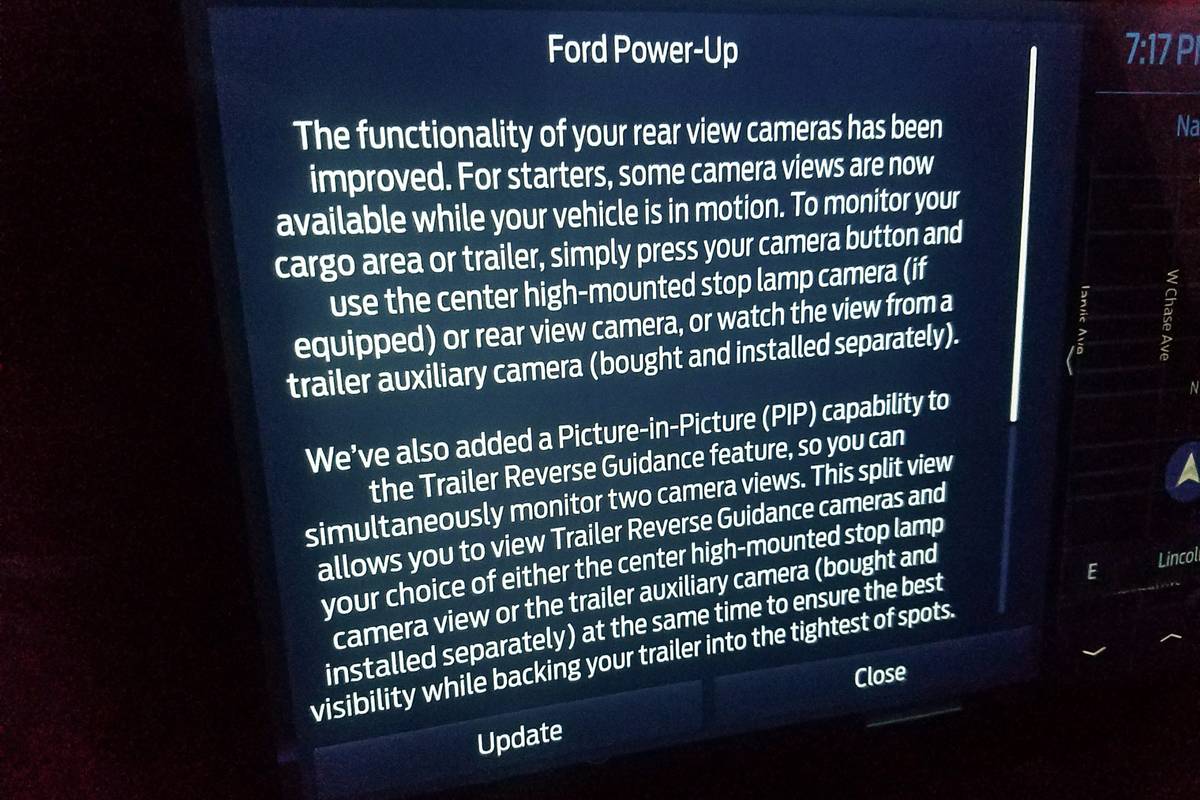 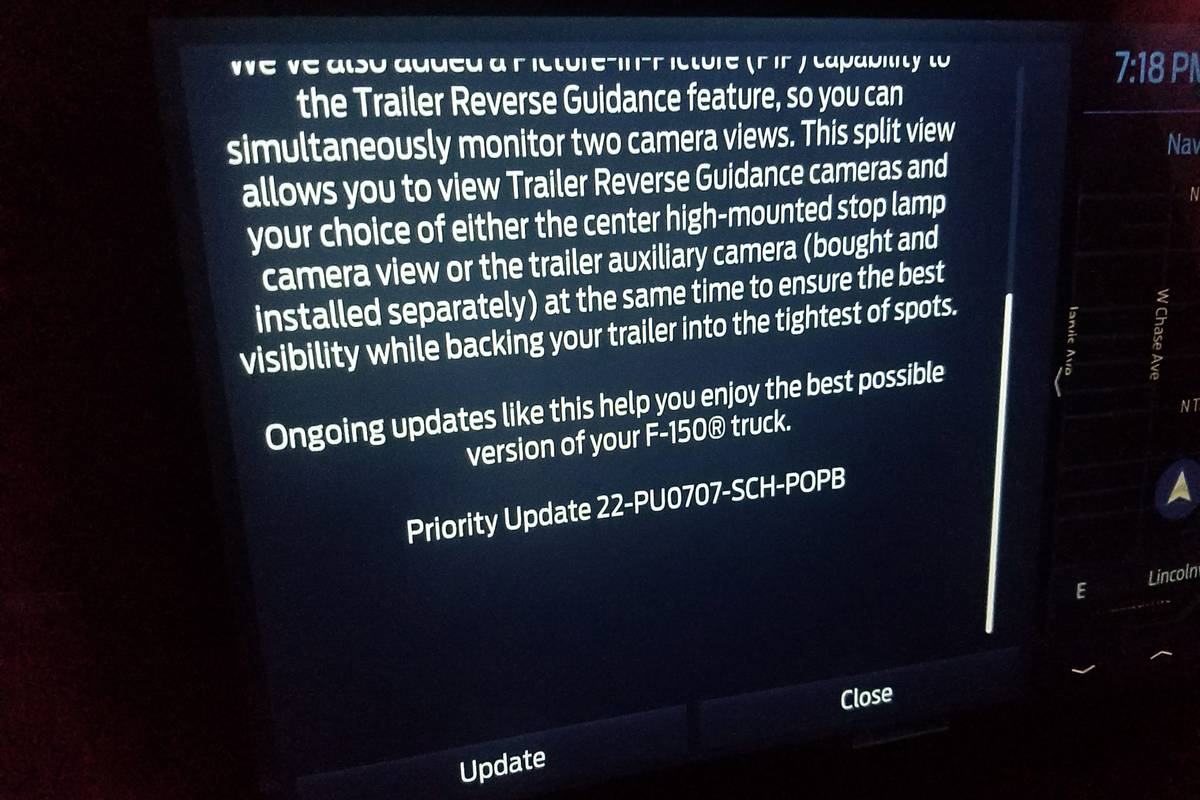 A quick primer on the F-150 Limited’s camera system: When the vehicle is stationary or moving at parking-lot speeds, the camera display can be switched between a front view, panoramic wide-angle front view, a pickup-bed view (from a camera built into the center high-mounted stop lamp), trailer-hitch view, traditional rear view, panoramic wide-angle rear view and 360-degree bird’s-eye view. (The 360-degree view appears as a split-screen display that also includes the front-view or rearview display depending on whether the truck is in Drive or Reverse.)

With the update (Priority Update 22-PU0707-SCH-POPB, to be exact), some of the camera system’s views are now available while the vehicle is in motion as well as stationary. The Trailer Reverse Guidance feature also now has picture-in-picture capability that enables two camera views to be monitored simultaneously. Since we don’t currently have access to a trailer, we haven’t tested the PIP capability, but Ford’s update notification says, “This split view allows you to view Trailer Reverse Guidance cameras and your choice of either the center high-mounted stop-lamp camera view or the trailer auxiliary camera (bought and installed separately) at the same time to ensure the best visibility while backing your trailer into the tightest of spots.” 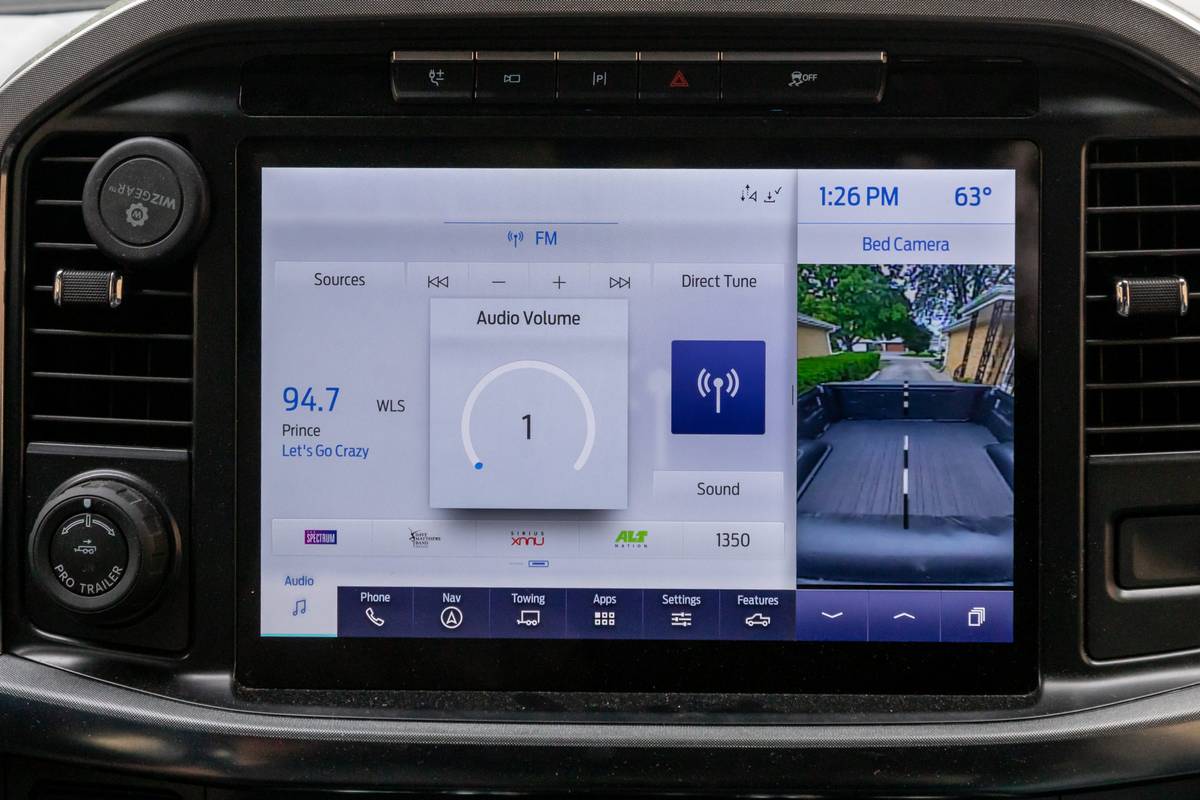 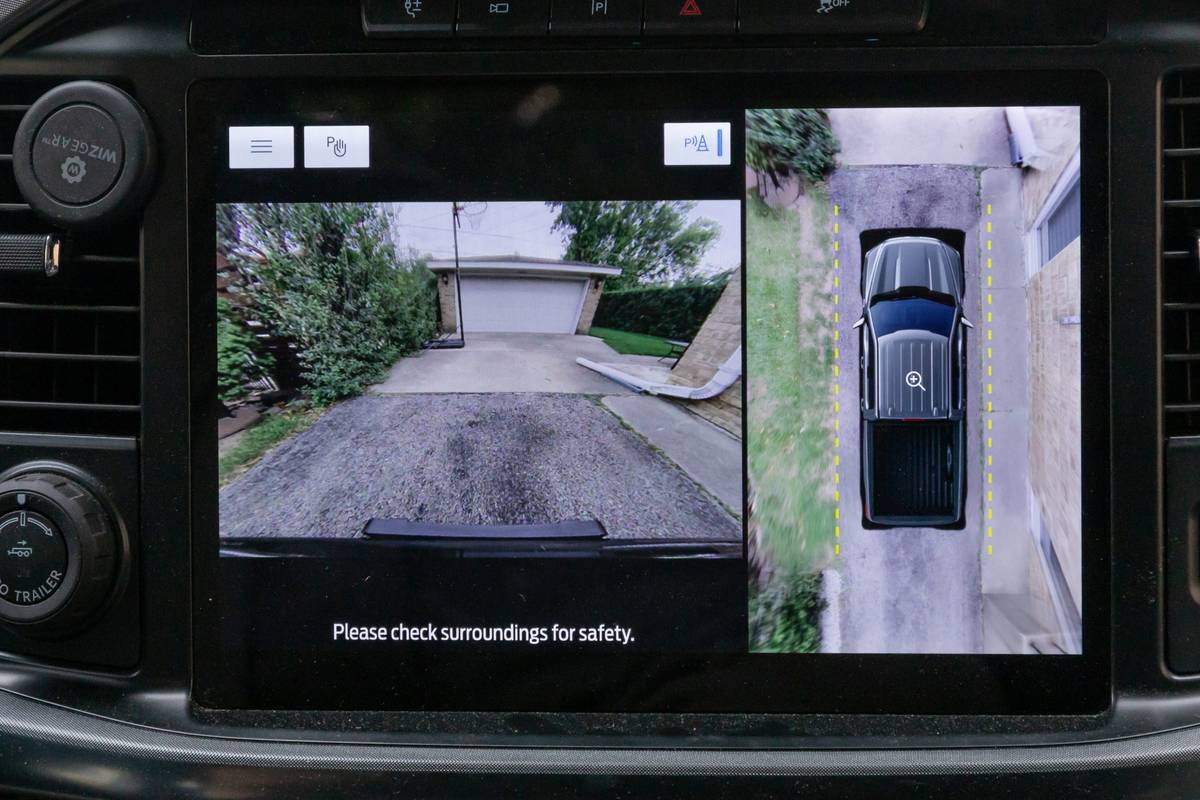 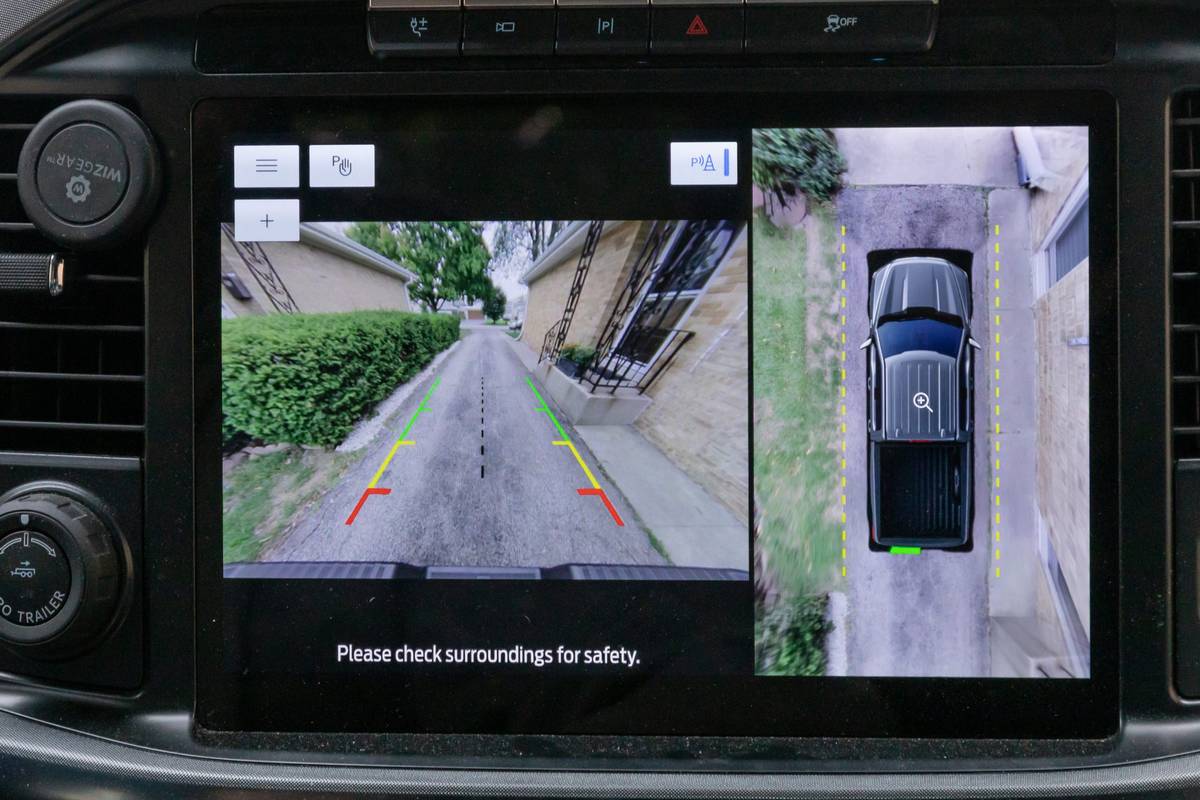 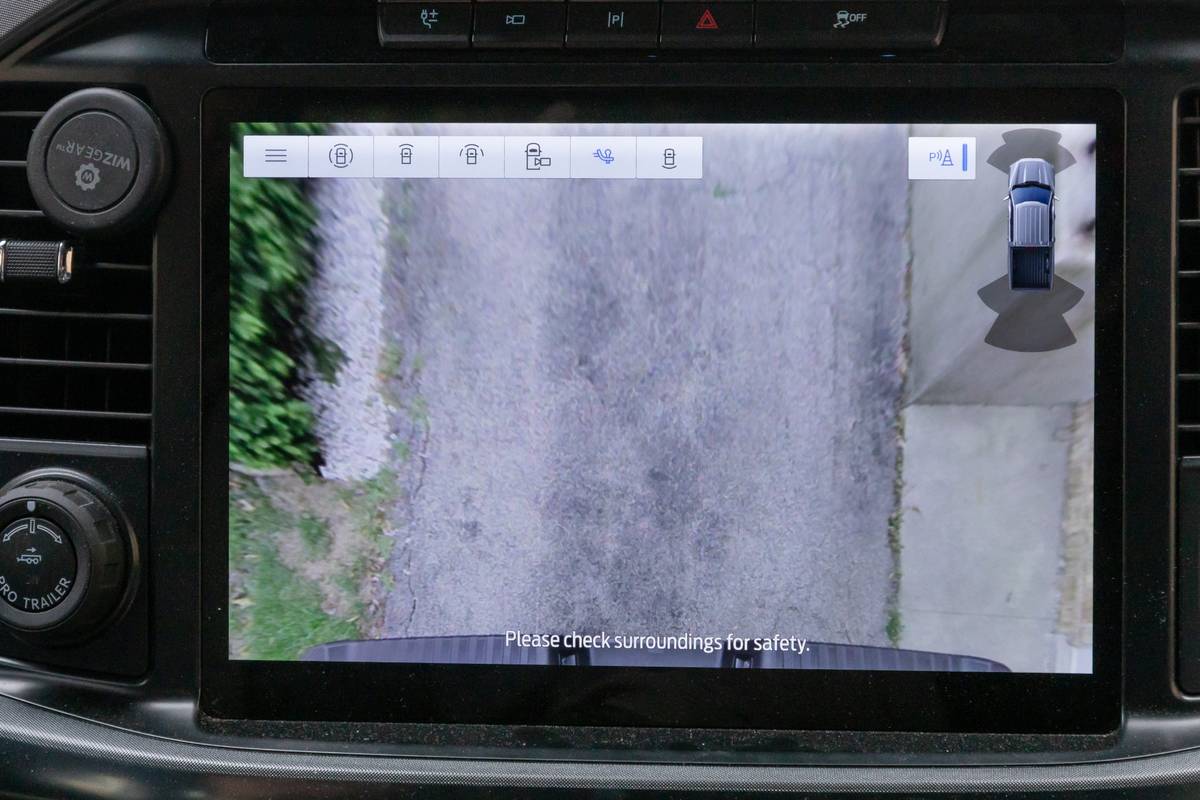 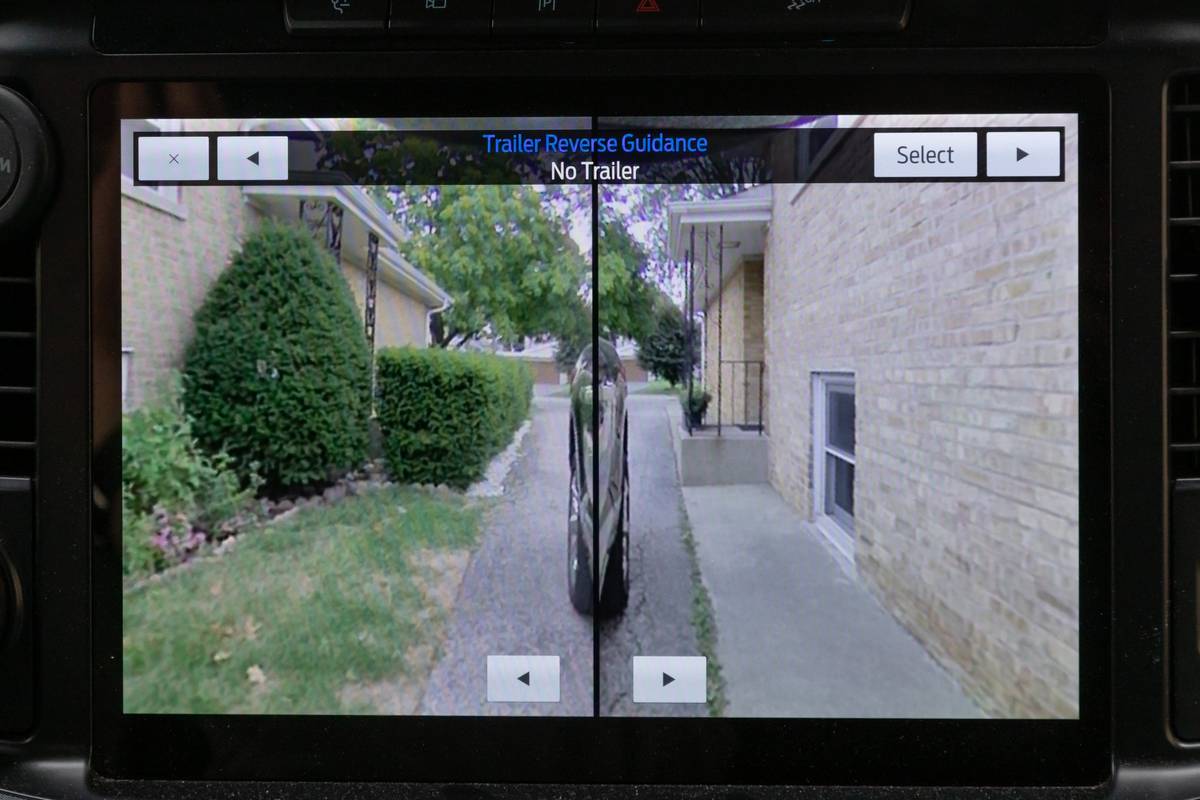 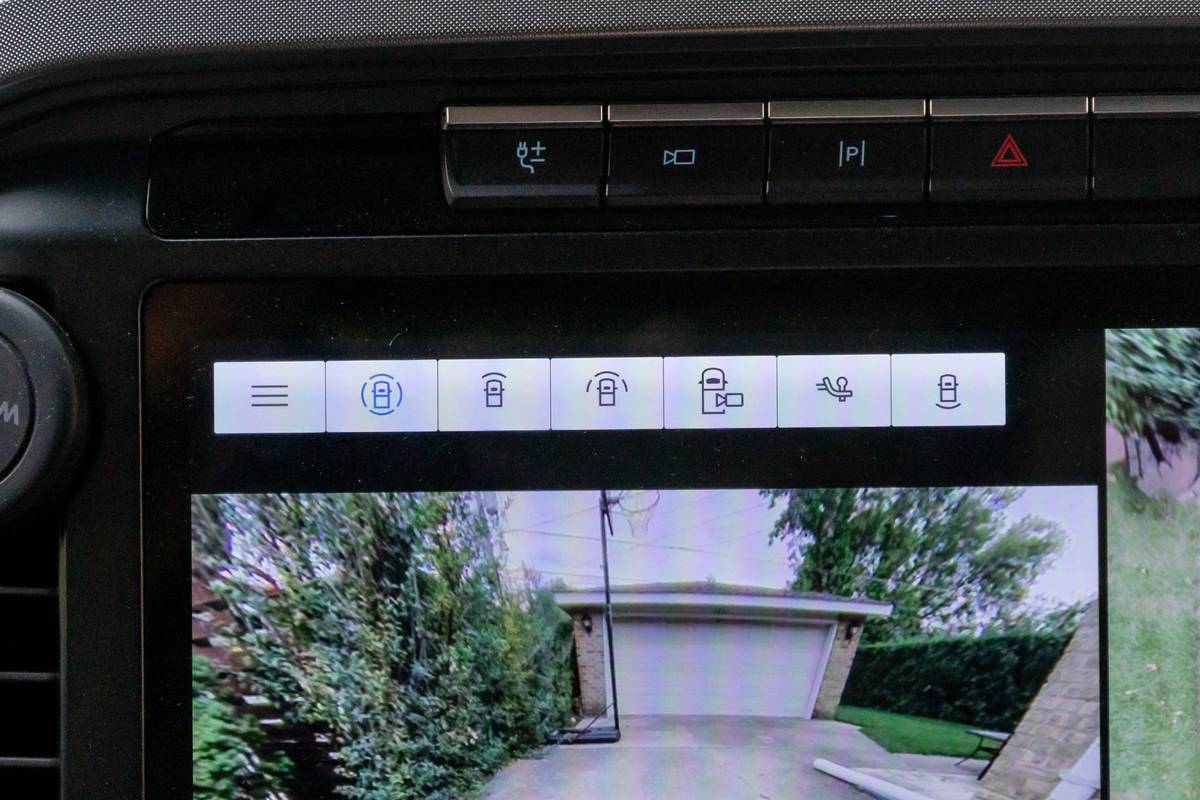 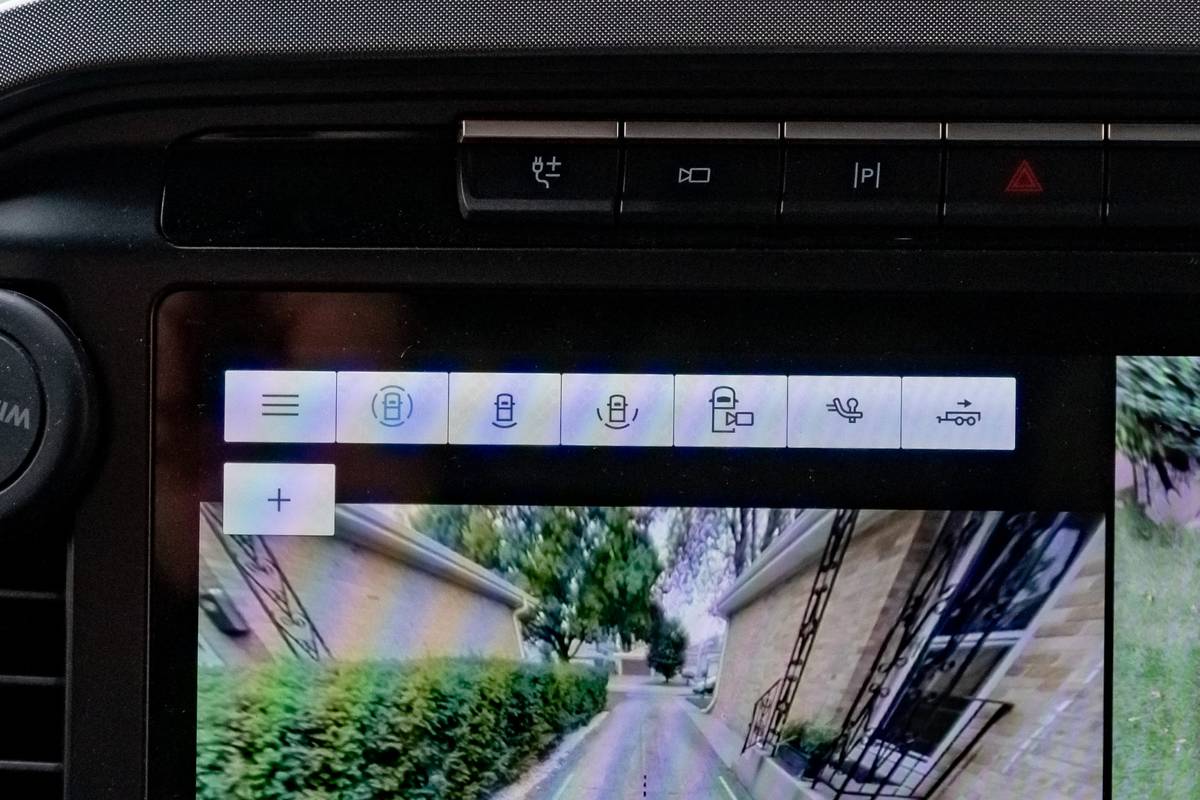 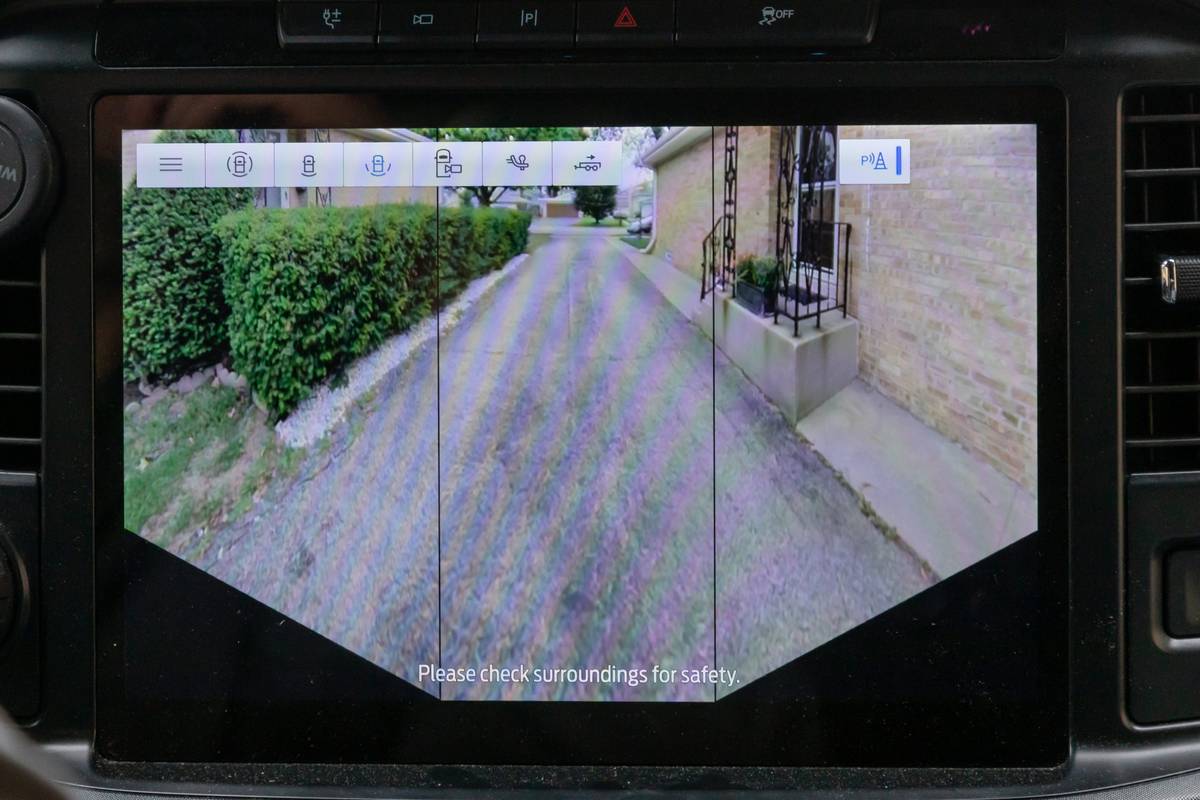 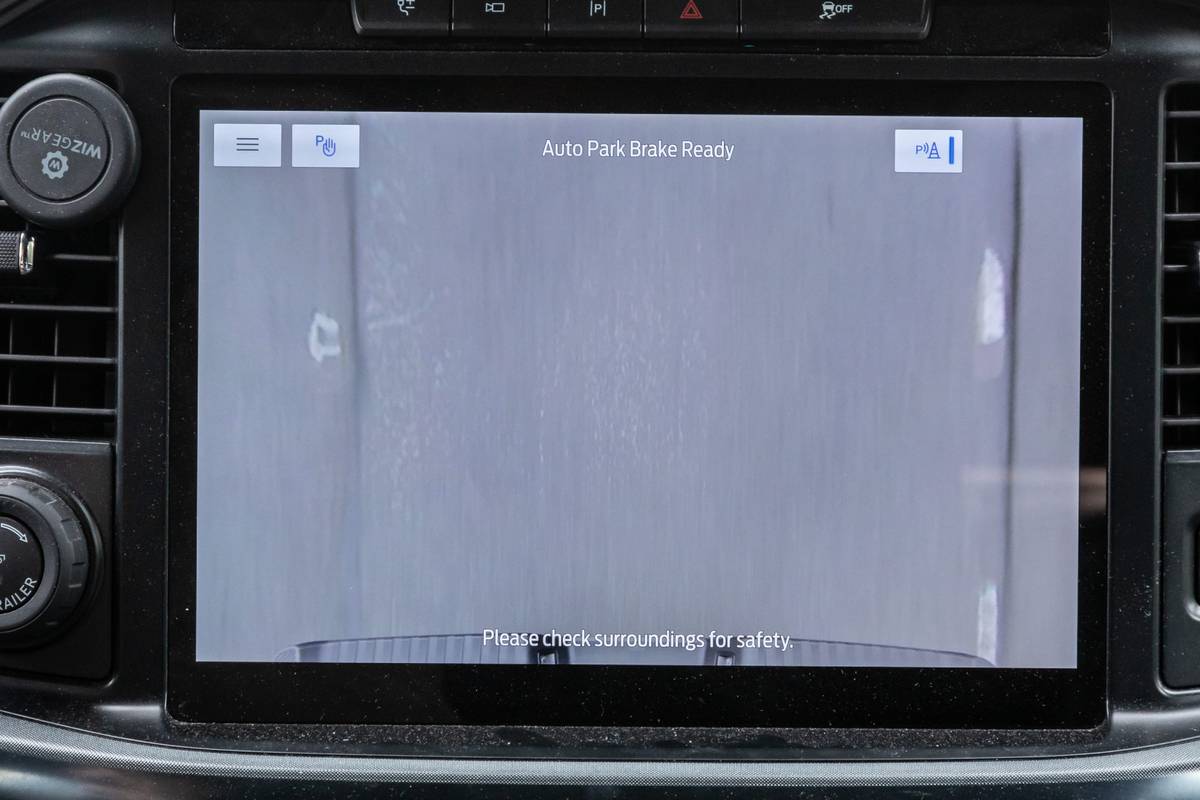 The bed-view, trailer-hitch and rearview displays can be selected when the vehicle is in motion — as can an auxiliary trailer camera view, if you have one installed. The bed view can also be displayed on only the right-hand side of the infotainment screen, so you can keep an eye on the bed’s cargo while simultaneously using the rest of the infotainment system’s functions.

Of the three, the bed camera display is the most useful. The wide-angle camera shows a good view of the bed itself, as well as the road and traffic behind the vehicle. The camera’s effectiveness is drastically reduced in nighttime driving, but even then, passing under the streetlights on our Chicago-area streets and expressways was enough to temporarily (if dimly) illuminate the cargo bed image on our display screen. 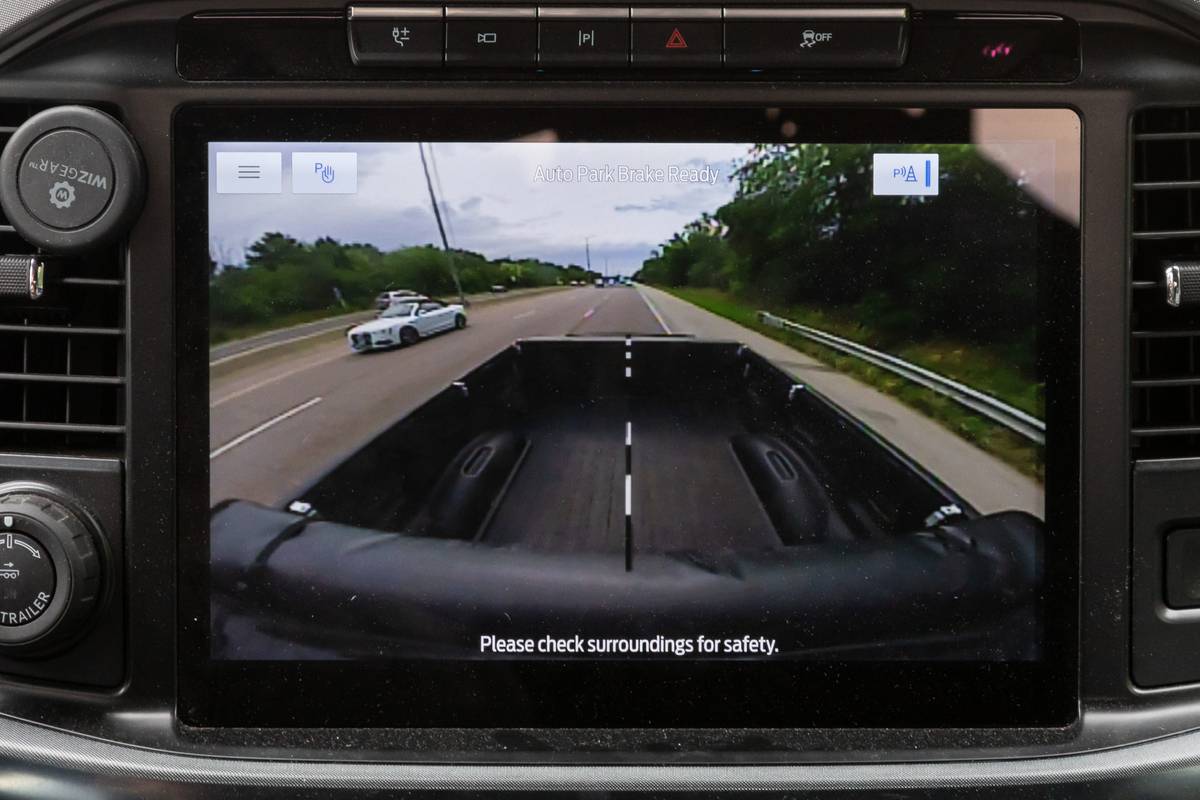 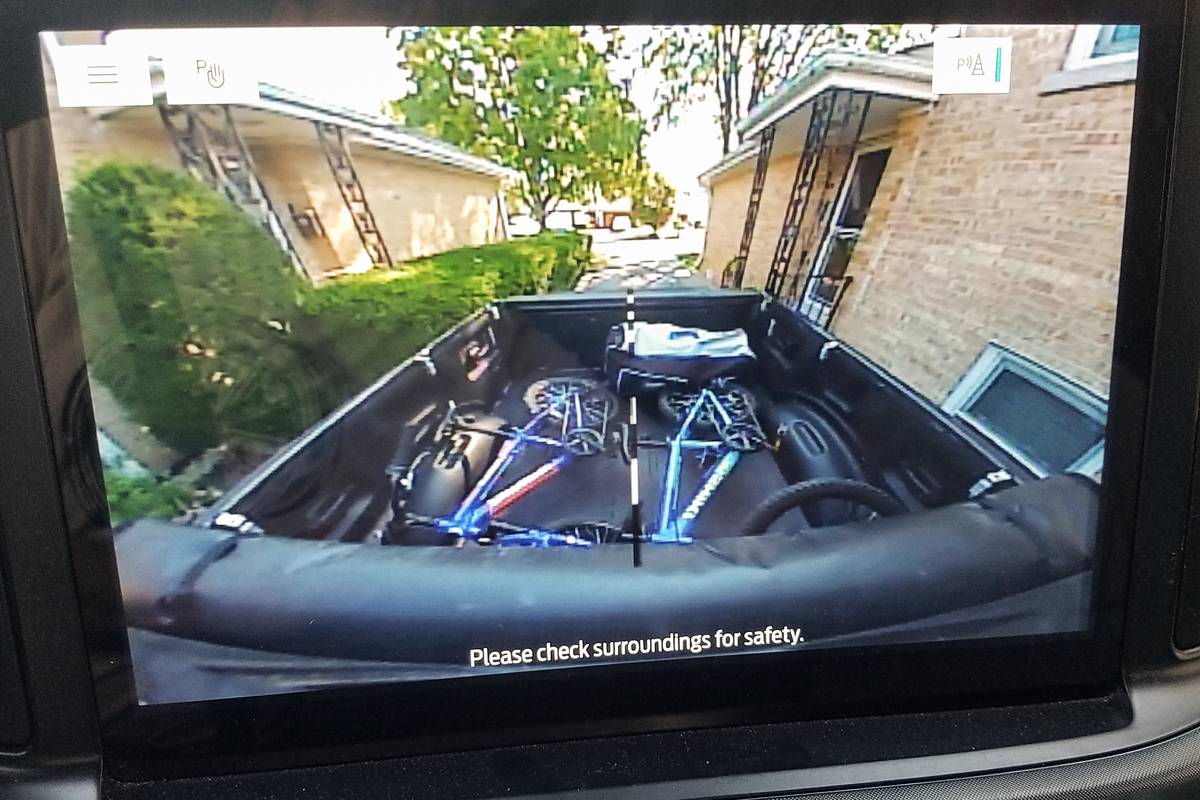 The bed camera display includes digitally superimposed black and white lines — one on the bed floor and one on the inner tailgate surface — that highlight the front-to-back centerline of the pickup. When the truck is parked, these lines would be useful for lining up a gooseneck/fifth-wheel trailer hitch, but they could also be helpful in determining if cargo might have shifted while you’re on the road.

The displays can be a bit distracting while you’re driving; we’d guess Ford might have had to check a few internal legal boxes before making these in-motion camera views available. (The camera system in GM’s full-size pickups, for example, only allows the bed view to be displayed for eight seconds when the vehicle is traveling above 8 mph.) When you don’t have a trailer installed, watching the straight-down hitch-view display while you’re motoring down the road is kind of like watching the trippy Star Gate sequence in “2001: A Space Odyssey,” but with pavement rushing past instead of psychedelic outer-space special effects.

The addition of enhanced camera functionality isn’t as momentous an occasion as Ford’s BlueCruise hands-free driver-assist system finally being added to our tester’s repertoire of capabilities, but it’s a welcome enhancement nonetheless — and one that was essentially effortless to add.