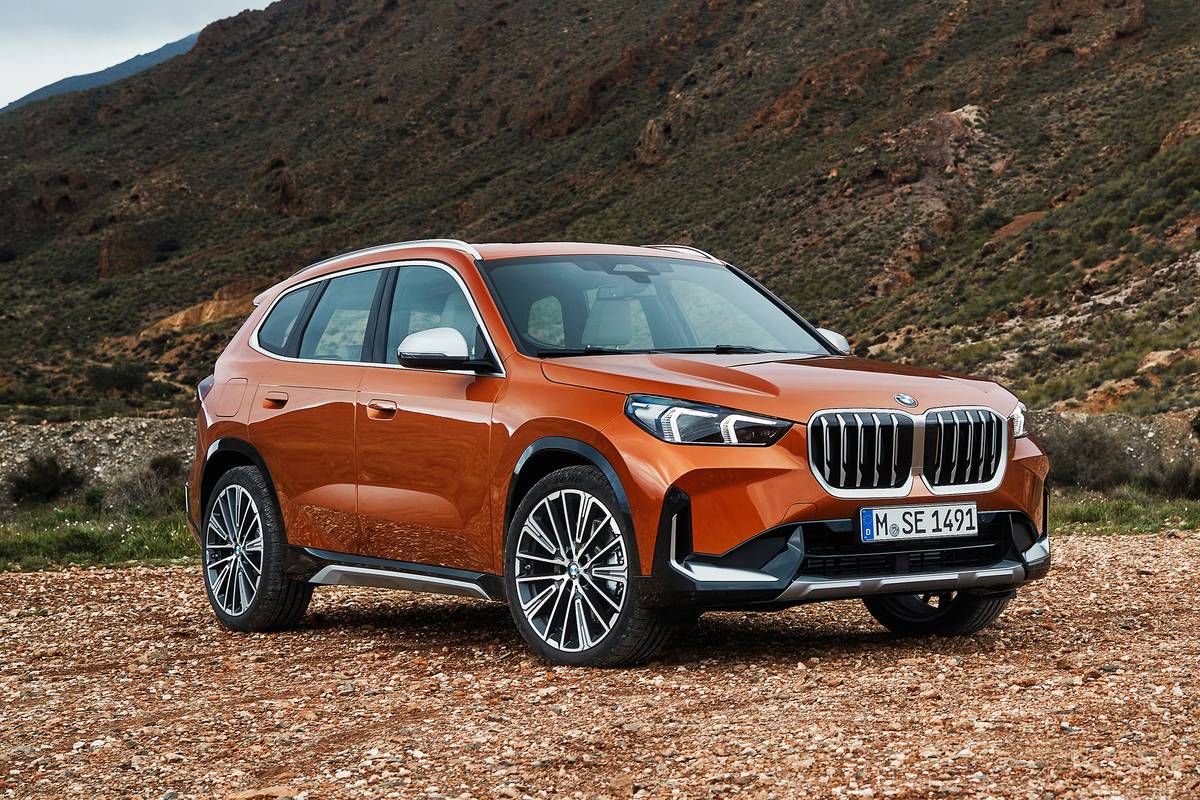 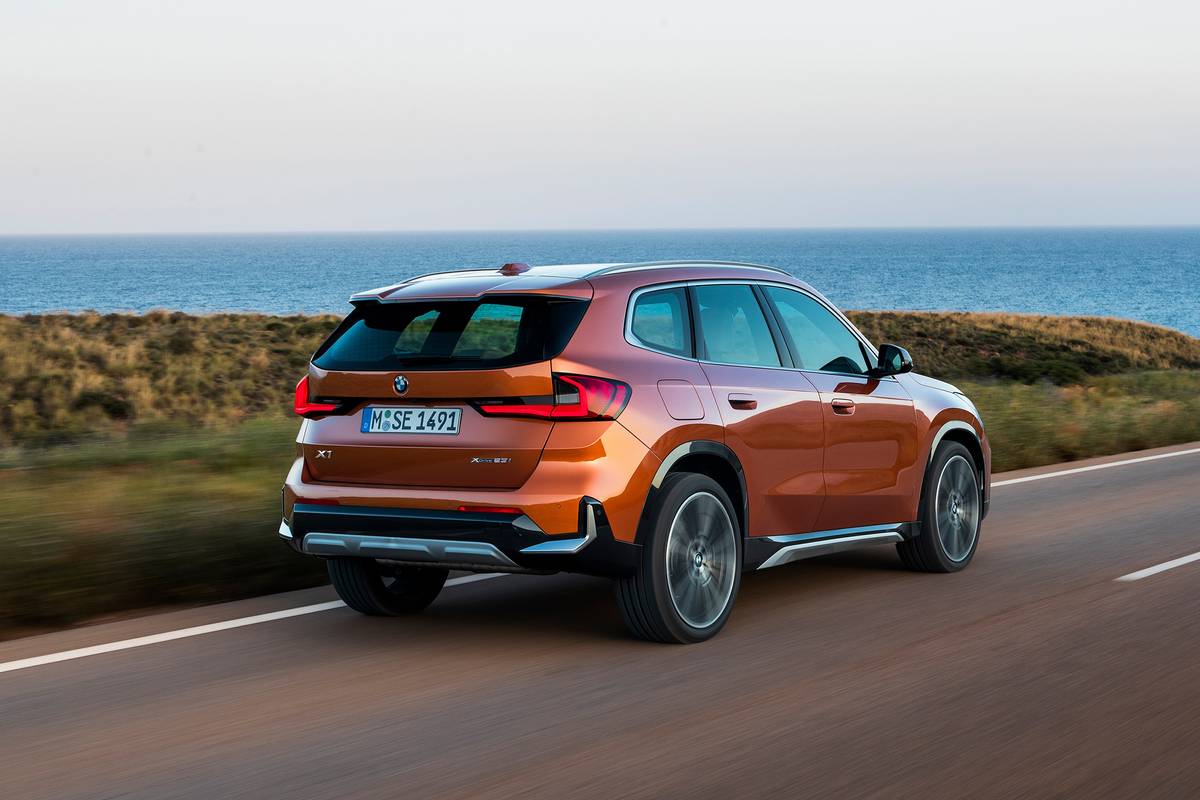 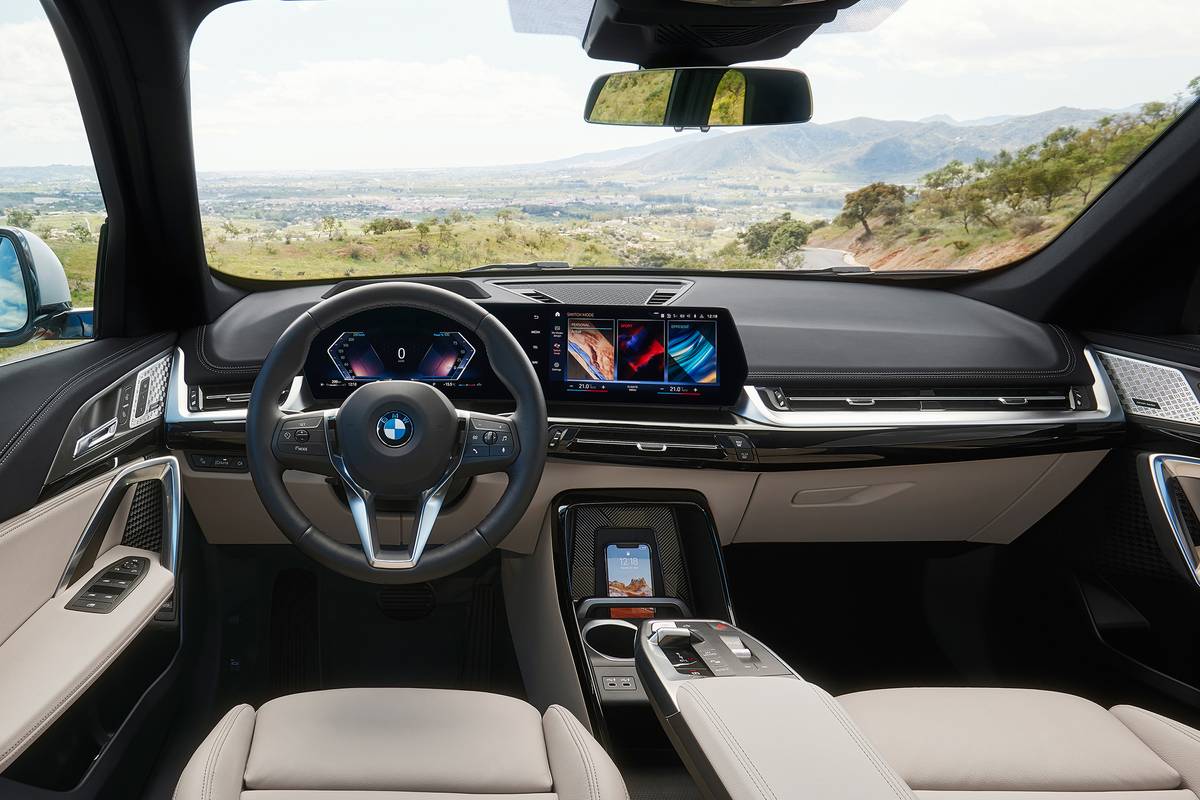 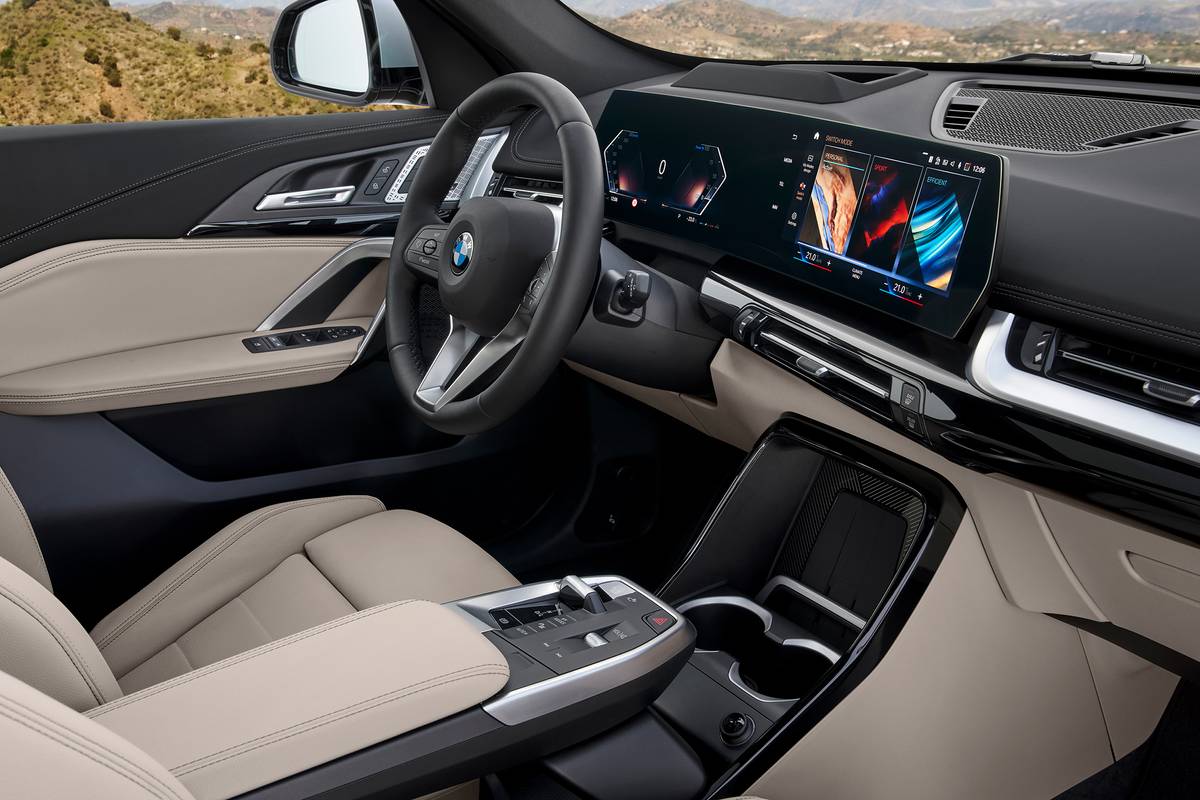 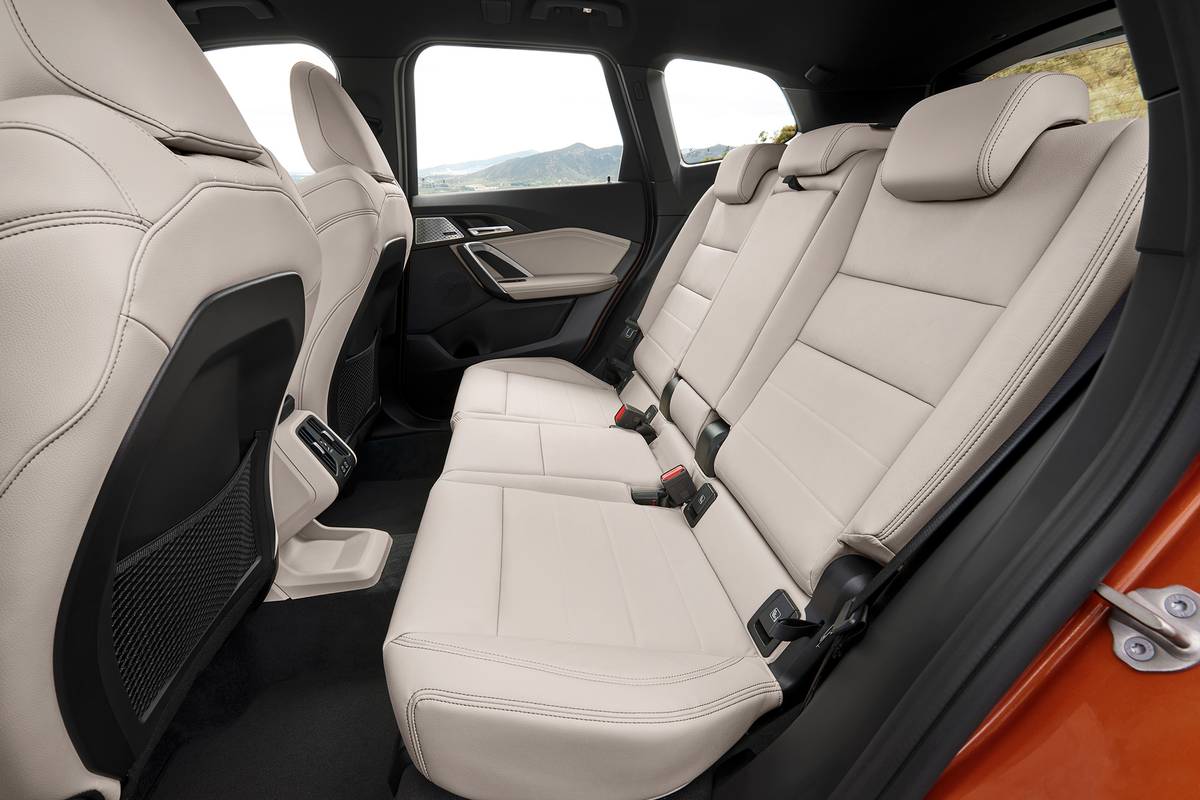 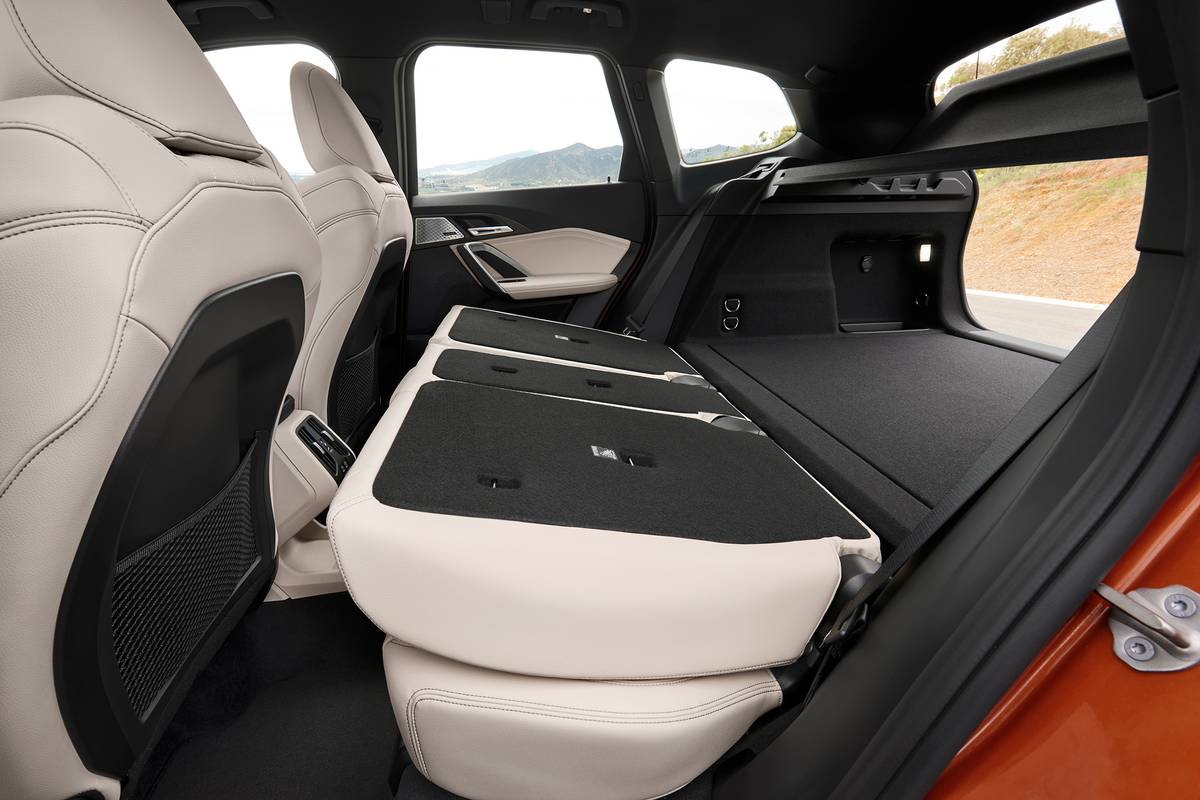 Looks like: A bigger, more upright X1 with a larger grille

BMW’s smallest SUV, the  X1, gets an update for 2023. The automaker calls it an all-new vehicle, changing in every dimension, despite its fairly similar styling to the outgoing model. Featuring a revised powertrain, more power and torque, some new self-driving and safety tech, and, perhaps most significantly, BMW’s new curved interior screen with a new operating system, the 2023 X1 indeed represents a significant update to the brand’s entry-level SUV.

It seems that each new BMW to come along lately gets increasingly more controversial styling, usually centered on a dramatic increase to grille size, but the X1 seems to have escaped that curse. Its styling has been freshened but still looks considerably like the 2022 model. The X1’s front end is new, with restyled headlights and bumper, and yes, a new, larger signature BMW twin-kidney grille; however, unlike so many other new BMW products, the more squared-off grille doesn’t overpower the front styling that invites beaver analogies. New horizontal orientation to the rear styling accompanied by new taillights finishes off the back end, giving the whole X1 a more formally upright, traditional SUV look than the prior model.

Standard wheel size is 18 inches, with 19- and even 20-inch wheels available for the first time. Two design packages are also available: The first is a Design xLine Package adds wheel choice, high-gloss body cladding, additional brightwork, pearl-effect chrome trim and silver mirror caps. Inside, new faux-leather upper door and dash trim are included, plus aluminum door sill strips, while the gloss-black interior trim can be upgraded to aluminum mesh or eucalyptus open-pore wood. The second is an M Sport Package, which swaps in more aggressive looks featuring larger cooling air inlets up front and an integrated diffuser in back. Exclusive 18-inch M wheels are included and can be upgraded, and the exterior gets blacked out with Shadowline trim replacing most of the chrome. Inside, the M Sport gets sport seats, Aluminum Hexacube trim and a special leather-wrapped M steering wheel with shift paddles.

More Power and a New Transmission

The standard BMW twin-turbocharged 2.0-liter four-cylinder engine gets a power boost for 2023, now making 241 horsepower and 295 pounds-feet of torque — nice bumps from the 228 hp and 258 pounds-feet of torque with the 2022 model. The traditional eight-speed automatic transmission is also gone, replaced by a new seven-speed dual-clutch automatic. Also disappearing from the lineup for 2023 is the standard front-wheel-drive model – BMW’s xDrive all-wheel-drive system is now standard.

Dimensionally, the X1 grows in every direction, including a 0.9-inch bump to the wheelbase. The suspension also has been heavily reworked with an apparent aim toward long-distance comfort and the added benefit of additional cargo room, the latter thanks to a revised rear suspension configuration. An active damping suspension is available if you select the M Sport Package; otherwise, there’s a standard steel coil suspension.

The Most Dramatic Change Is Inside

While the outside changes might only be noticed by the most die-hard Bimmerphiles, the inside changes are enough to get anyone’s attention thanks to the introduction of the BMW Curved Display featuring iDrive8. This is a combined screen between the central multimedia touchscreen and the large digital gauge cluster display, similar to what’s in Mercedes-Benz vehicles and most recently appearing on electrified BMWs like the iX and i4. It consists of a 10.7-inch (diagonal) touchscreen melded with a 10.25-inch gauge cluster and runs the latest version of BMW iDrive Operating System 8.

The display rests in a revised instrument panel that has a much more horizontal design to it and incorporates new slim climate-control vents. Between the front-seat occupants rests a new floating console design that contains a shifter toggle instead of a lever, handle or knob, and a new My Modes button replaces the former Driving Experience Control switch. Forward and below the center console are two cupholders and an area to secure a smartphone in an upright and visible position to the driver and front passenger.

Also on the tech side, the 2023 X1 uses BMW’s Live Cockpit Plus system that features BMW Maps, Bluetooth interface, four USB-C ports and a 12-volt power socket. The navigation system uses an augmented reality system that ties in the driver’s view via a camera into the display screen and superimposes directional arrows when needed over the live scene.

A head-up display is optional, but BMW’s Personal Intelligent Assistant voice control avatar is standard with iDrive 8, which the company says will bring new levels of easy interaction between operator and vehicle. Smartphone integration using the MyBMW app will also be important, enabling functions like using the smartphone as a key, wirelessly integrating Apple CarPlay, Android Auto, WhatsApp messaging, mapping apps, Siri, Google Assistant and a variety of other apps into the iDrive 8 technosphere. The system also allows for personalized settings in the X1 tied to different drives, automatically activating and adjusting upon proximity to the vehicle. A 12-speaker Harman Kardon premium audio system is optional, but reconfigurable interior ambient lighting is standard.

From a safety standpoint, BMW is bringing a lot of its latest systems to the X1 — for a price. Typical of most German luxury brands, the list of standard equipment is limited to the required basics; you have to spend on option packages to get some of the more advanced features. Standard safety equipment includes active blind spot warning, front collision warning with mitigation, lane departure warning and parking sensors. You’ll have to order up the Driving Assistance Professional Package (which is currently TBD for production, likely due to chip availability issues facing the entire industry) to add active cruise control with stop-and-go, extended traffic jam assistant, active lane keeping with side collision avoidance, front cross-traffic alert and evasion aid.

The new 2023 BMW X1 will arrive in U.S. showrooms in the fall starting at $39,595 (including destination). While this represents a significant $3,200 increase over the cheapest 2022 X1 sDrive28i, a reminder is proper that the new ‘23 model comes with standard all-wheel drive; a more appropriate comparison puts it at $1,200 more expensive than the AWD 2022 X1 xDrive28i. That’s still a good bump — but given the dramatically new interior, increased power and larger overall dimensions, not one that’ll leave you wondering what you’re paying more for.