Opens website in a new tab
2022 Audi A3 | Cars.com photo by Christian Lantry

The verdict: Redesigned for 2022, the Audi A3 and S3 sedans offer balanced handling and myriad standard features, but hesitant transmissions and inconsistent quality let them down.

Versus the competition: With consumers overwhelmingly preferring SUVs these days, any small luxury sedan starting around $35,000 better be one hell of a car to justify its existence. The A3 and S3 have their moments, but drawbacks we experienced behind the wheel and elsewhere keep both cars short of the mark.

With front- or all-wheel drive, the A3 runs from the mid-$30,000s to around $50,000. The S3 packs considerably more performance and standard AWD; it’ll set you back another $11,000 or so at either end of the trim lineup. Around Cars.com’s Chicago headquarters, we drove an A3 with AWD and Audi’s optional sport suspension; we also drove the A3 and S3 back-to-back at a drive event in October in southeast Michigan. See our initial take after that drive, stack up the new A3 and S3 side by side, or compare them with their prior-generation 2020 counterparts (both cars skipped the 2021 model year).

Audi has also redesigned the related RS 3, which offers even more performance, but it had not yet debuted as of this writing. 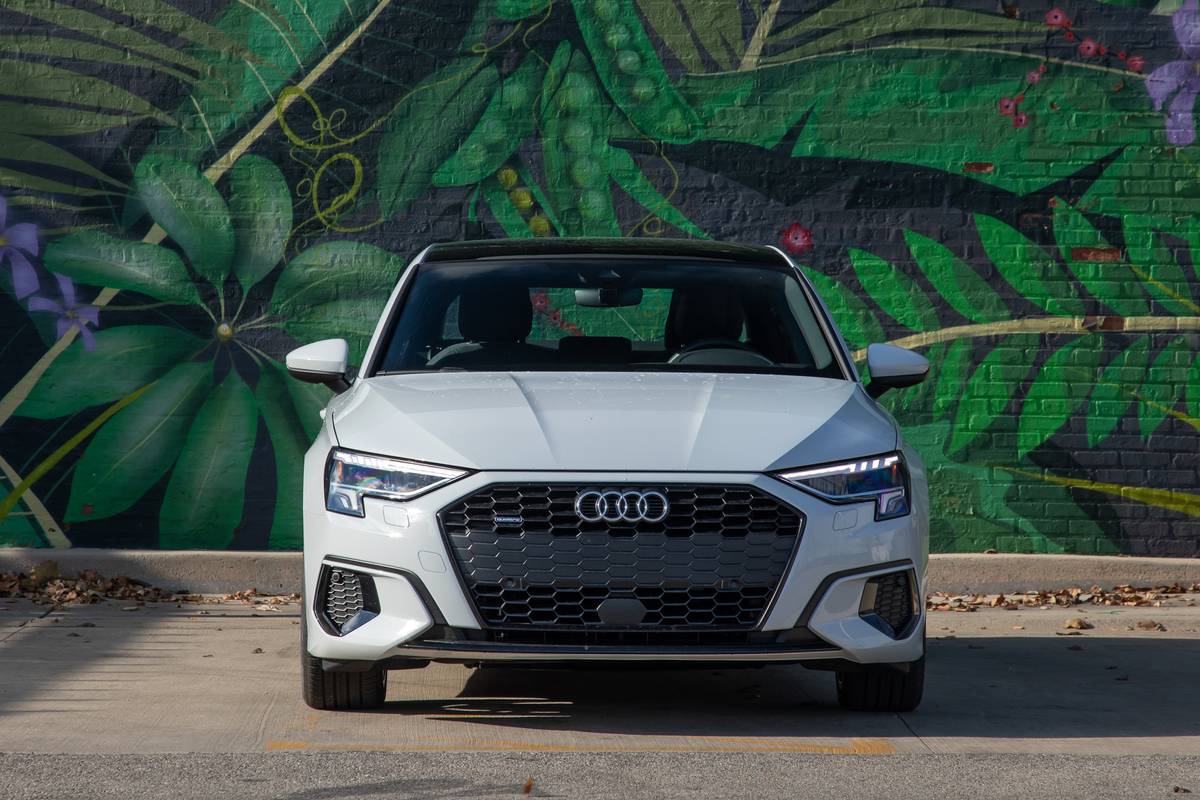 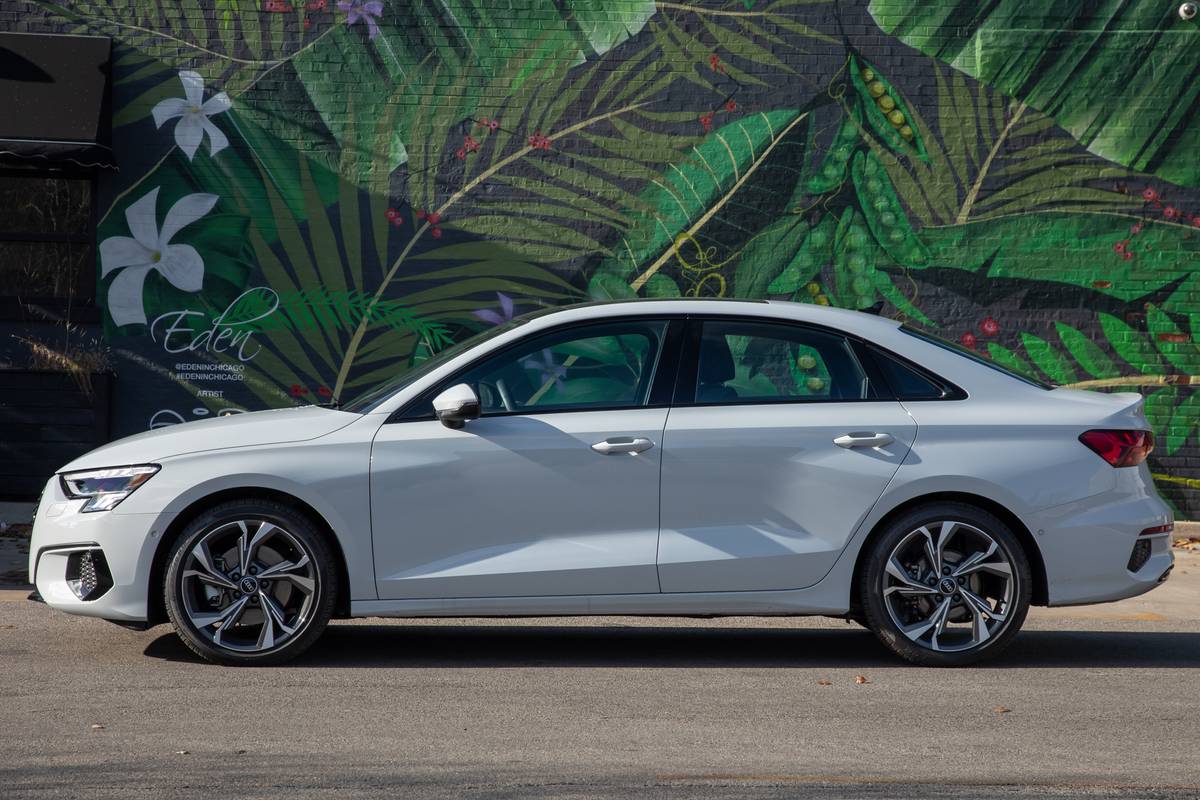 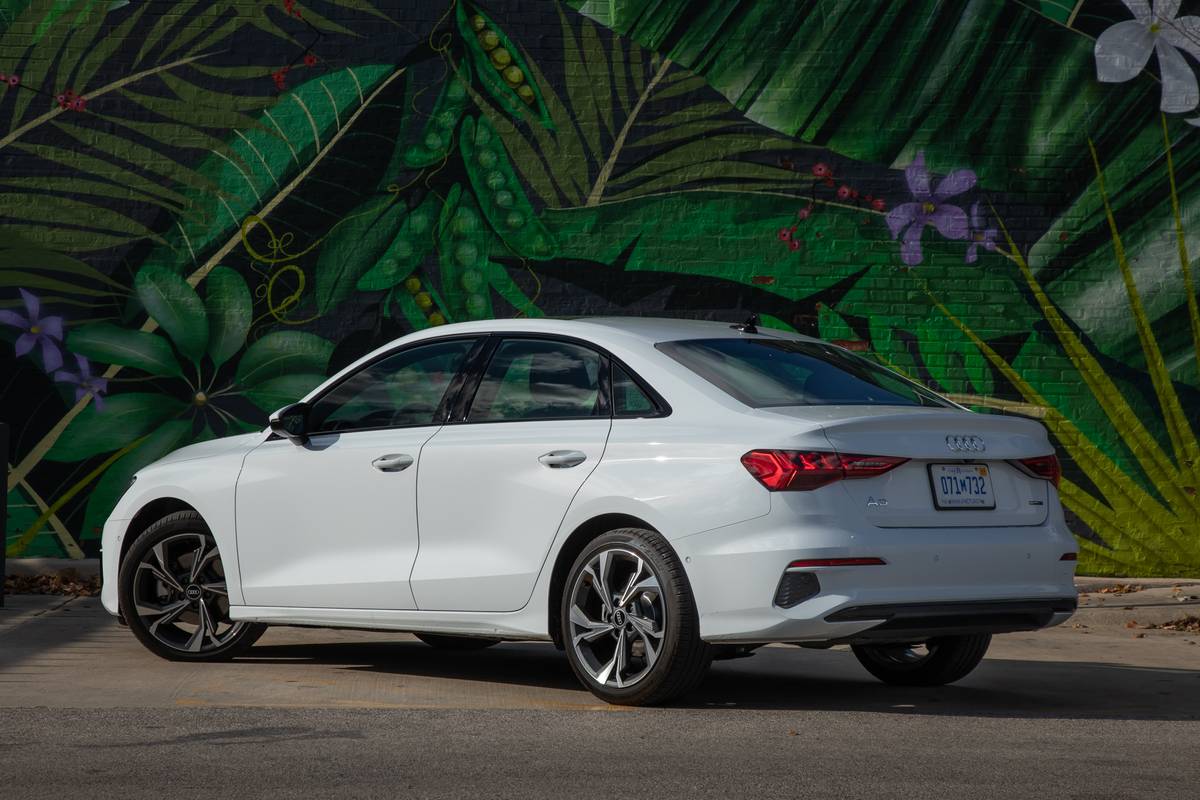 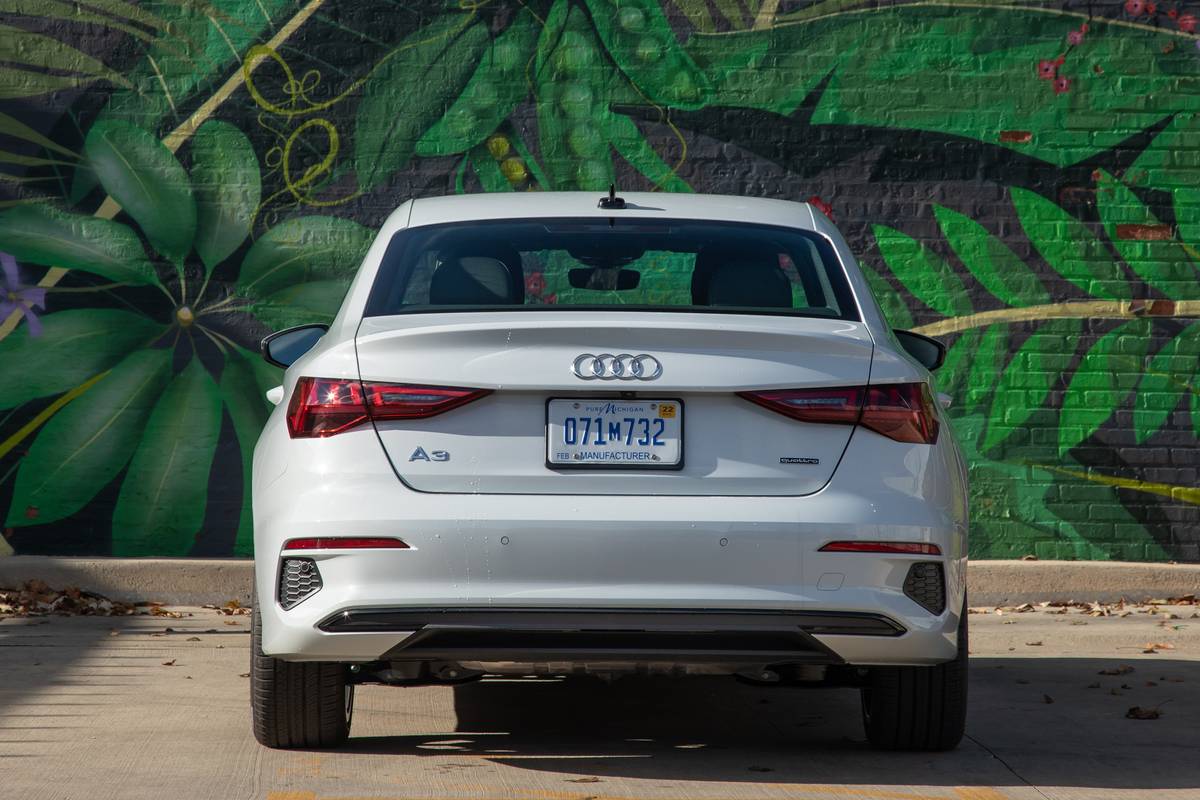 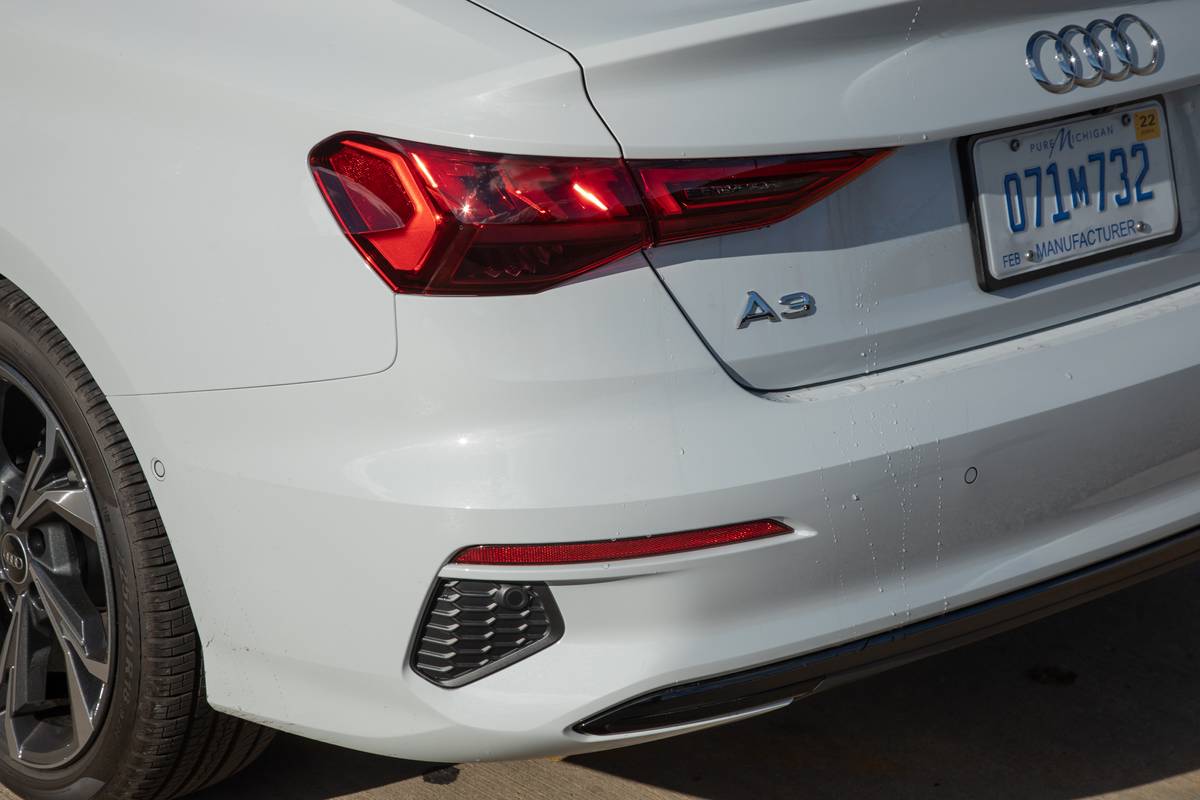 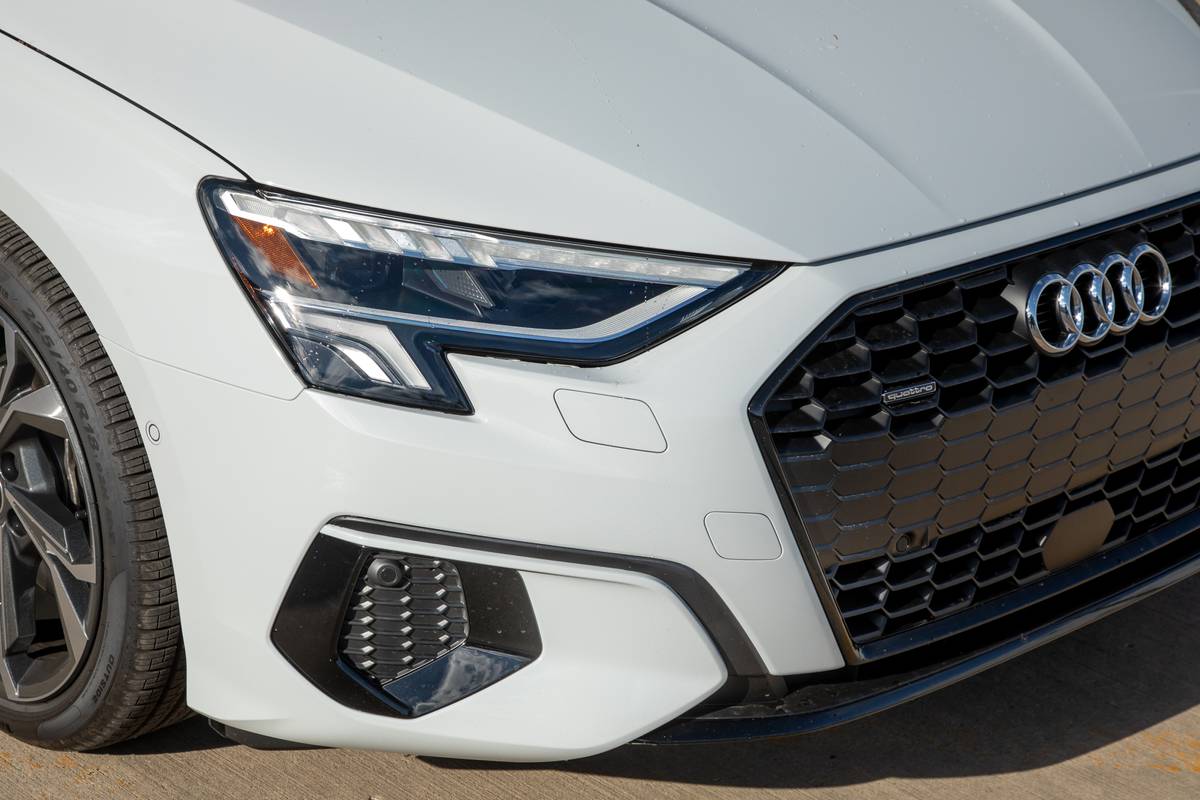 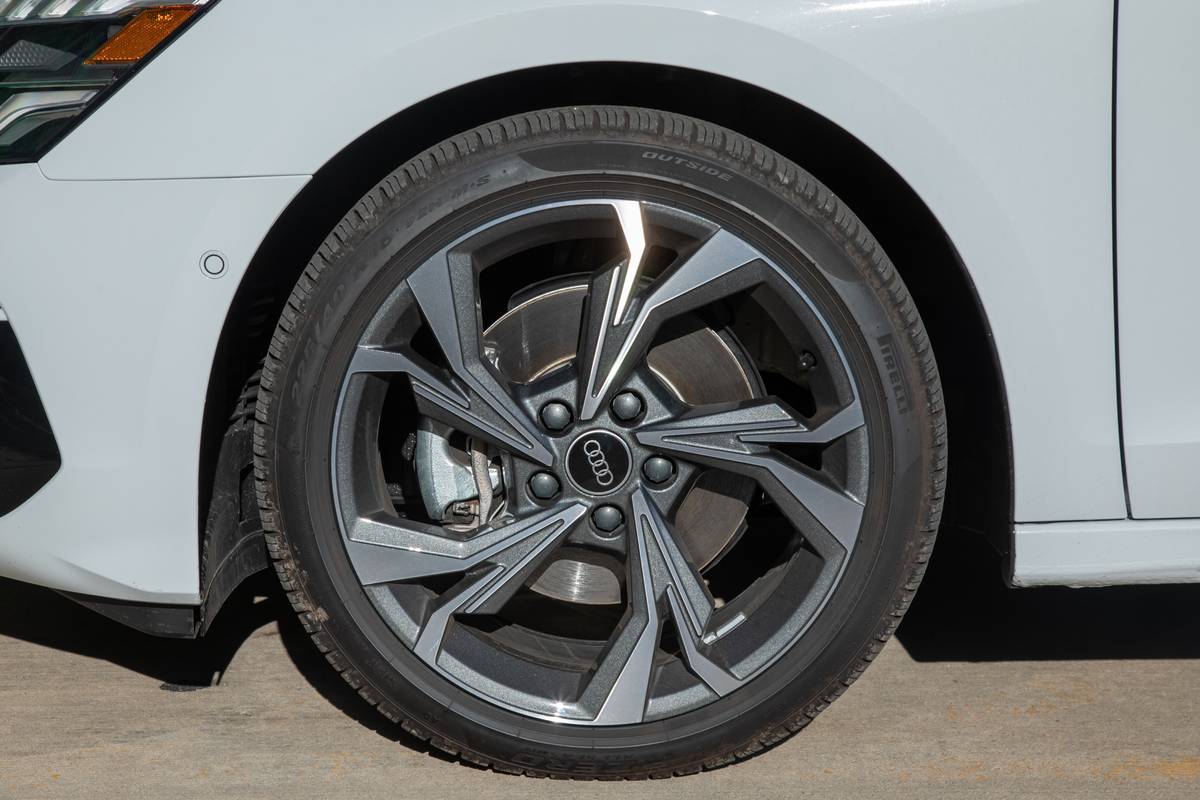 Whether it’s the weak initial grunt of the BMW 2 Series Gran Coupe or the modest overall power of the Mercedes-Benz A220, the base powertrains in many entry-luxury sedans have been underwhelming. So it goes for Audi: From a stop, the A3’s turbo four-cylinder (201 horsepower and 221 pounds-feet of torque) delivers swift accelerator response and robust, usable oomph early on. But once you reach cruising speed, that oomph is hard to access.

The culprit seems to be the A3’s transmission, a dual-clutch seven-speed automatic, which upshifts early and often. When you try to accelerate when already in motion, though, it needs a cigarette break before obliging. By my stopwatch, the A3 consistently needed a full two seconds to downshift into a lower gear and surge ahead during a standard 50 mph kickdown maneuver — despite plenty of engine windup that suggested something was coming. That’s a third longer than most cars I run through that test require and twice as long as the most responsive examples.

Transmission kickdown at lower speeds seemed similarly delayed in the A3, though I didn’t time it. It wasn’t just me, either; multiple Cars.com editors have criticized the A3’s transmission. The sedan’s Dynamic setting — which is the sportiest of several selectable drive modes — holds lower gears longer than the default mode, which lessens the need to kick down as often. But when the drivetrain eventually does settle into a higher gear, requesting a lower one can take just as long.

The S3 (306 hp and 295 pounds-feet of torque) betters kickdown lag to a more average delay. The car is expectedly quick, especially as rpm builds. Power becomes explosive past 5,000 rpm or so — enough to lend the car a peaky, rev-happy character with some novel turbo lag. It’s rather different from the A3’s low-rpm around-town versatility. A little more displacement might even out some of the top-heavy approach: Like the A3, the S3’s turbo four-cylinder displaces 2.0 liters, though the A3’s engine has a higher compression ratio thanks to Audi’s novel B-cycle.

The S3 recommends premium fuel, while the A3 runs fine on regular — with better EPA gas mileage. 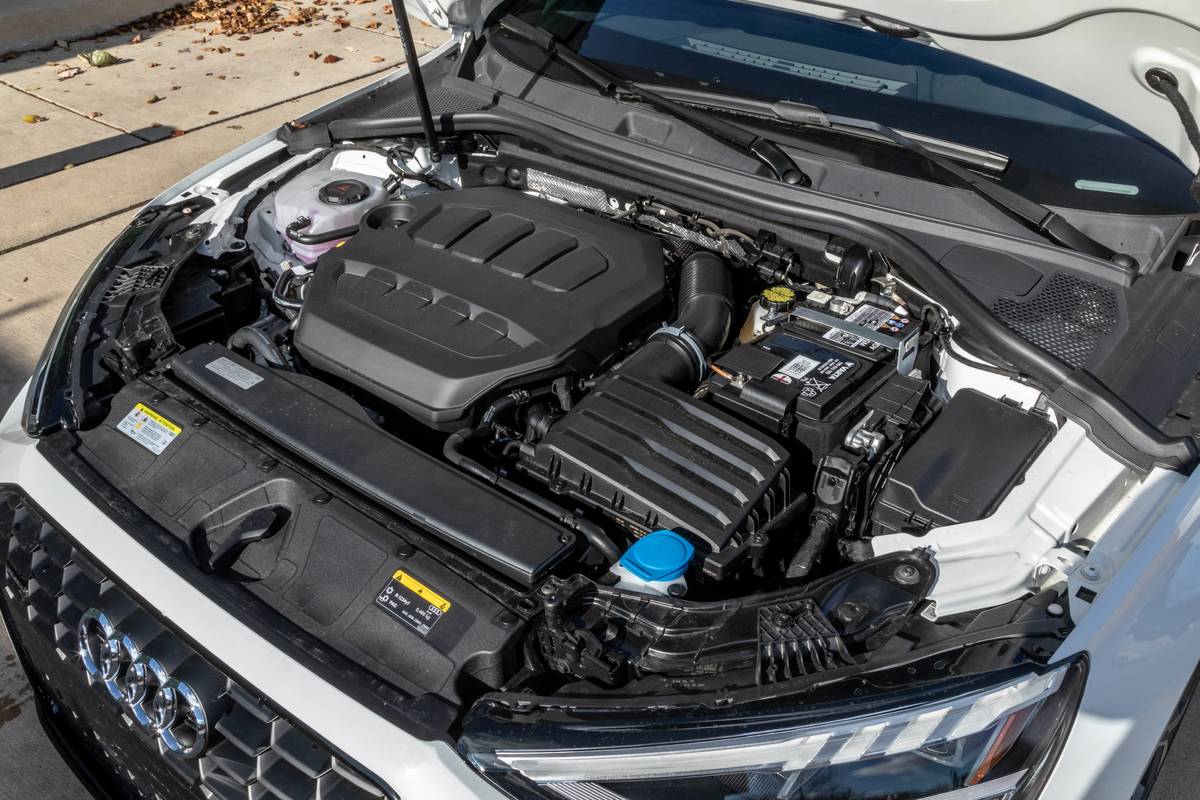 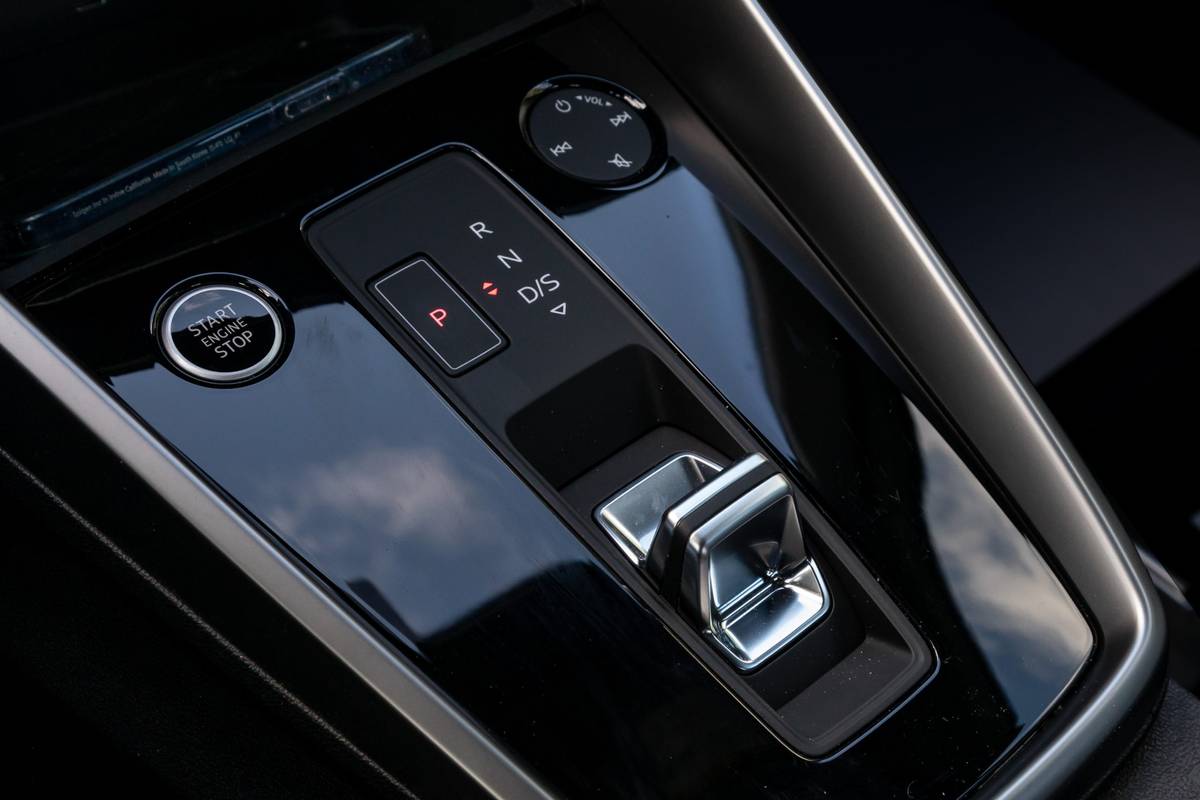 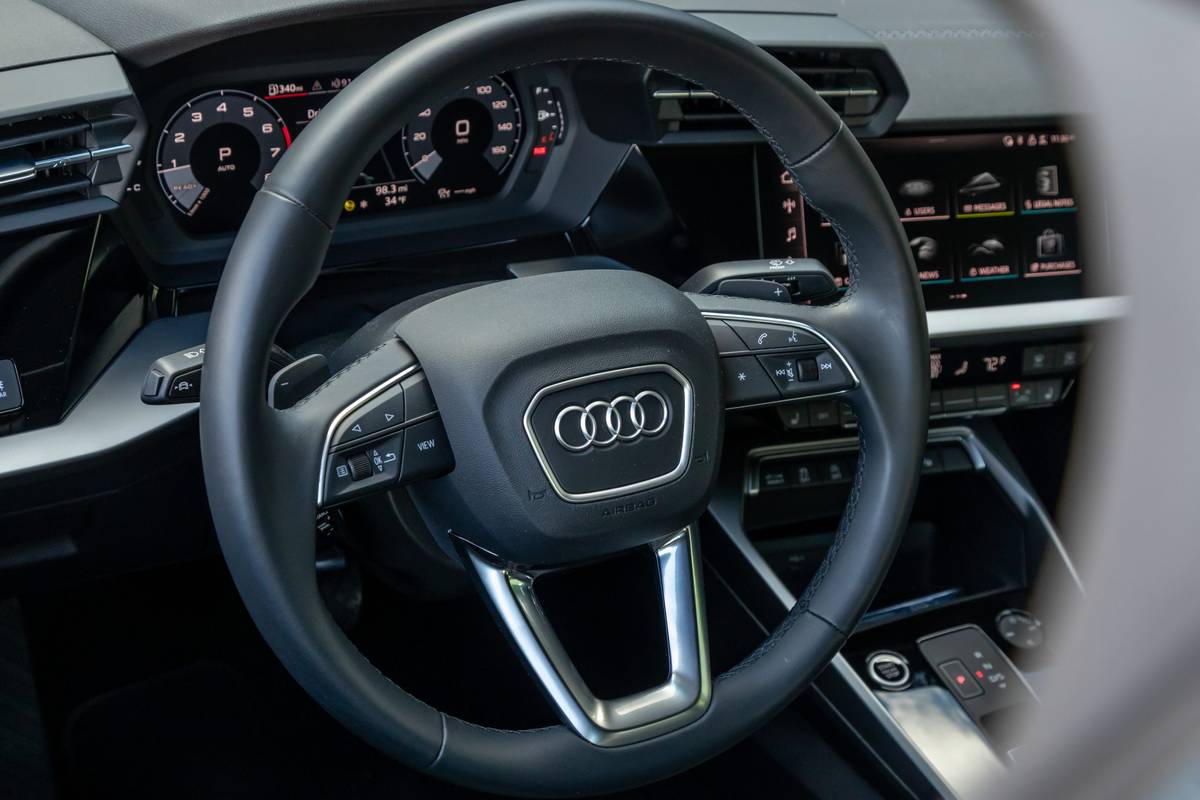 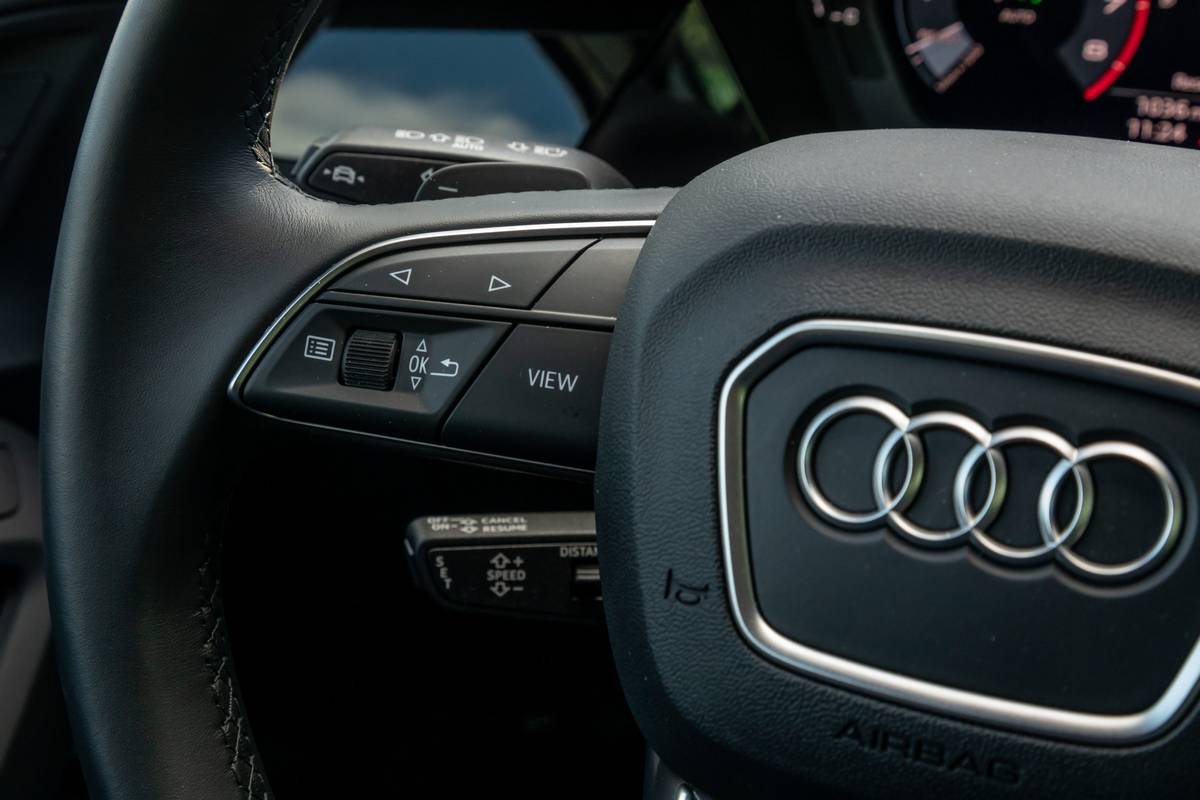 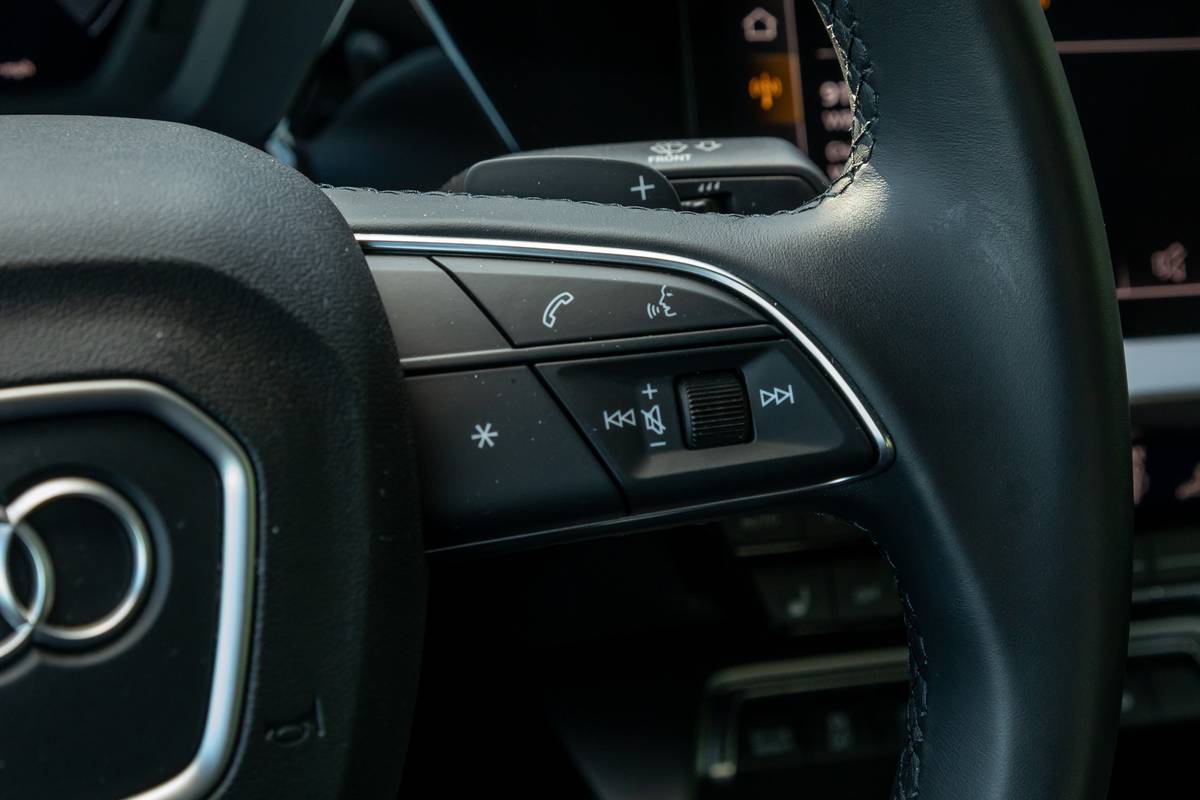 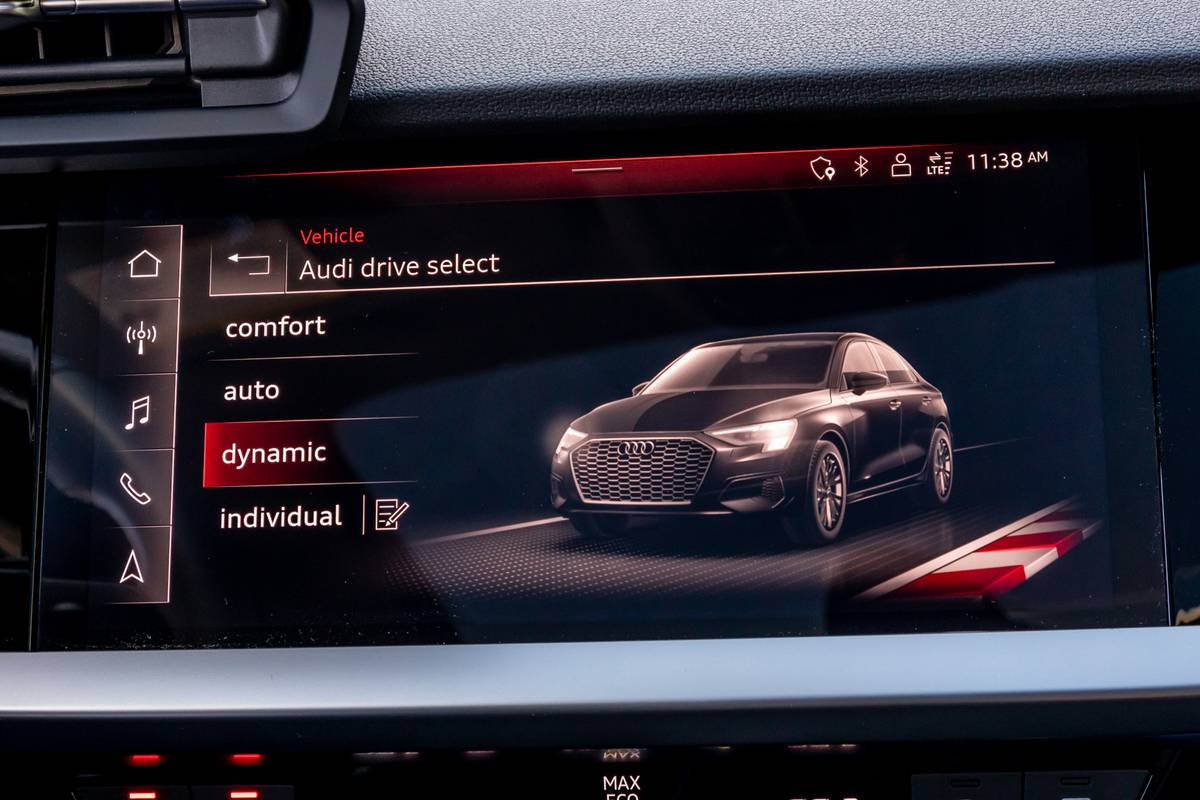 Both Audis we tested were outfitted with their more aggressive suspension and wheel options: 18-inch wheels and an optional sport-tuned suspension on the A3, and 19s and an S sport suspension with adaptive shock absorbers on the S3. Ride quality in the A3 is firm but livable, with some harsh impacts at highway speeds but good overall body control. The S3 rides firmer still, particularly at highway speeds, where frost heaves and other bumps can prove disruptive even in the suspension’s comfort-oriented setting; at lower speeds, it’s more similar to the A3’s sport suspension — on the workable side of firm.

It’s worth noting that tiny luxury sedans aren’t exactly a comfortable-riding group, so Audi isn’t an outlier here. The standard setup on either car (17-inch wheels on the A3, 18s with passive shocks on the S3) has the potential to soften things up, but we didn’t test an A3 or S3 thus equipped.

In both cars, Audi’s AWD earns its keep when it comes to dynamics, not just all-weather traction. It sends enough power rearward during mid-corner acceleration to fend off understeer, making for gratifying, neutral balance. Roadholding was good in both cars (the tires were Pirelli PZero all-seasons on the A3, Bridgestone Potenza high-performance summers on the S3), with minimal body roll during turn-in. Steering feedback is good across the board, with the S3’s quicker ratio delivering a welcome dose of extra sharpness. 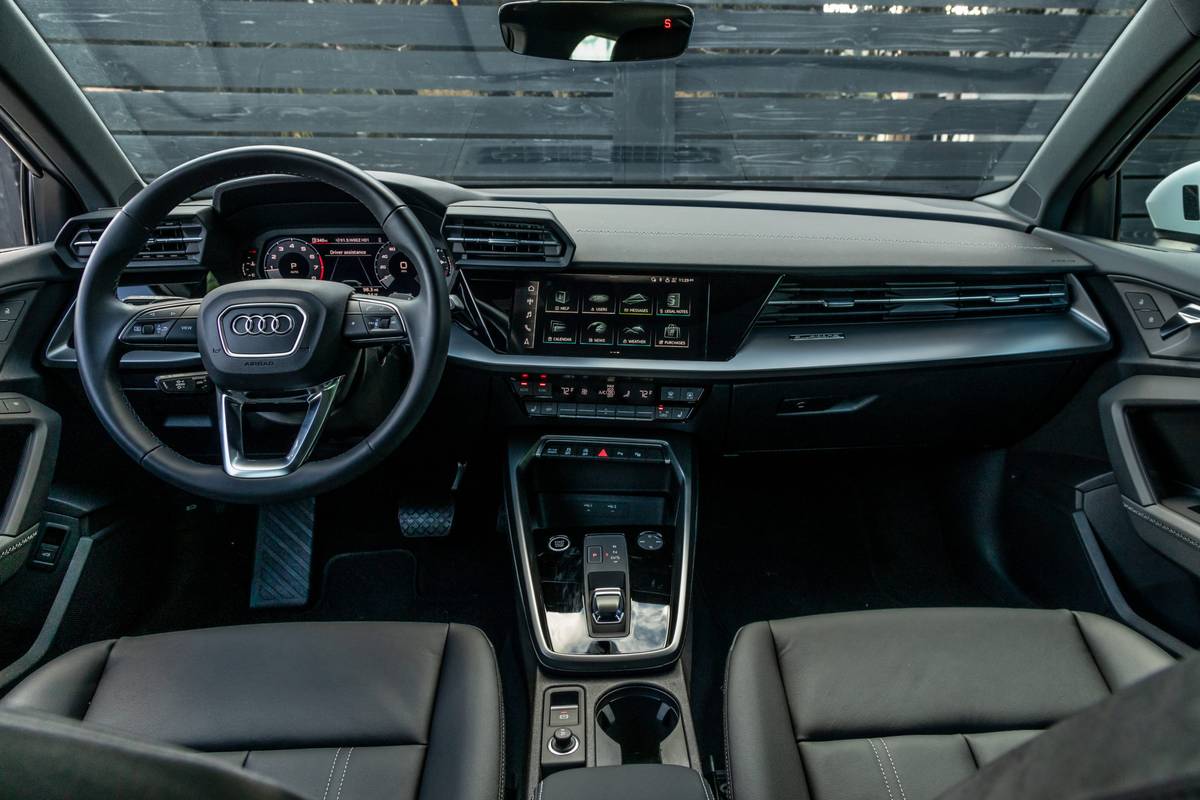 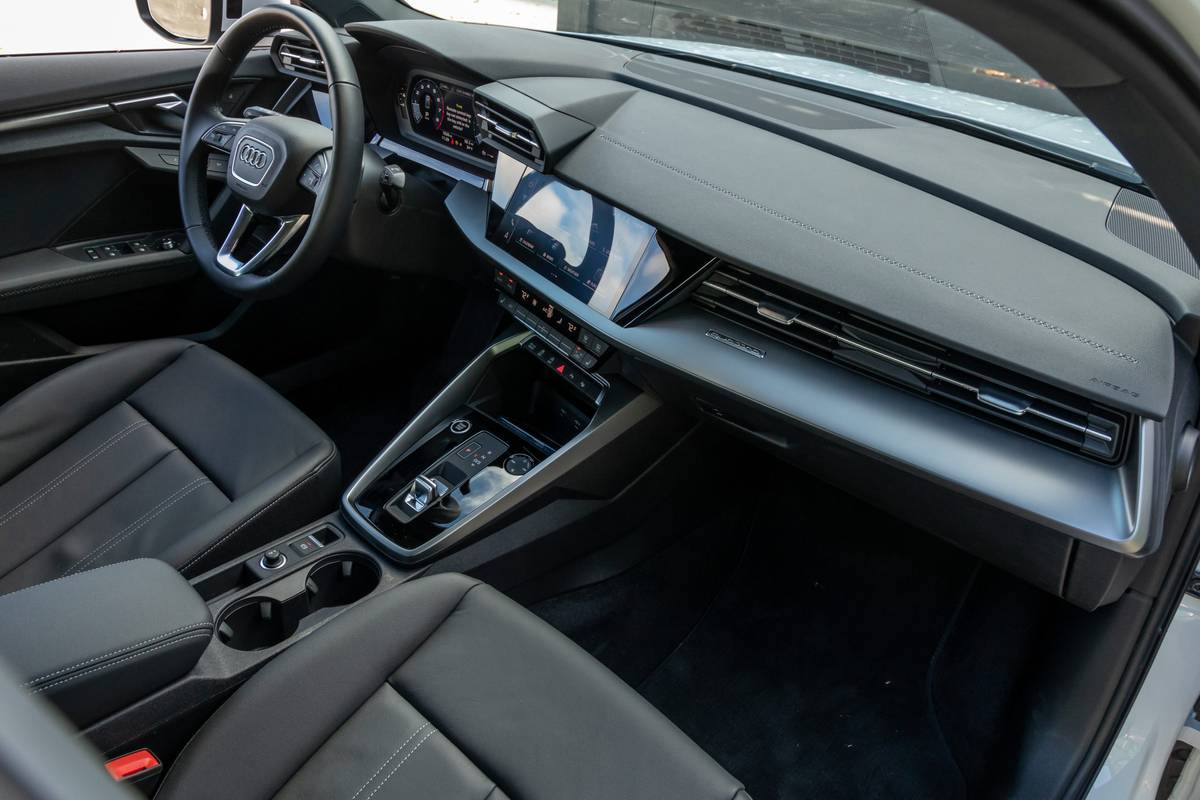 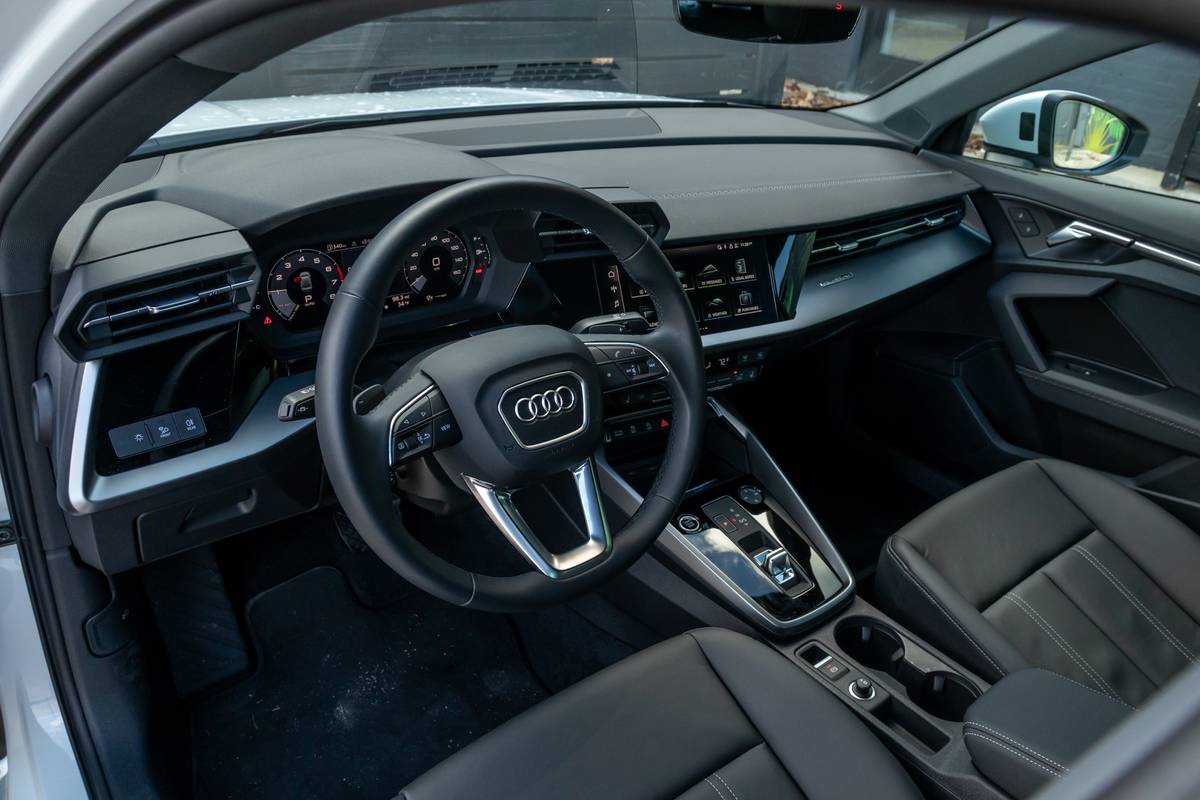 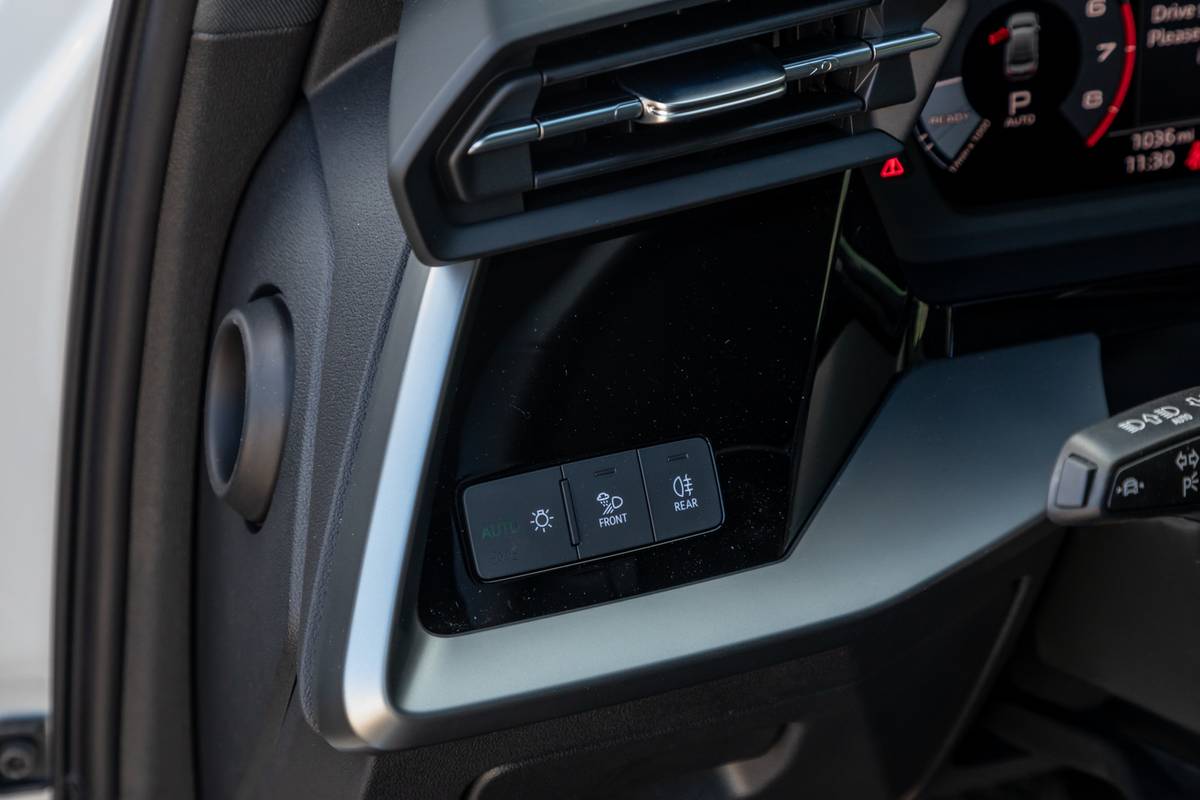 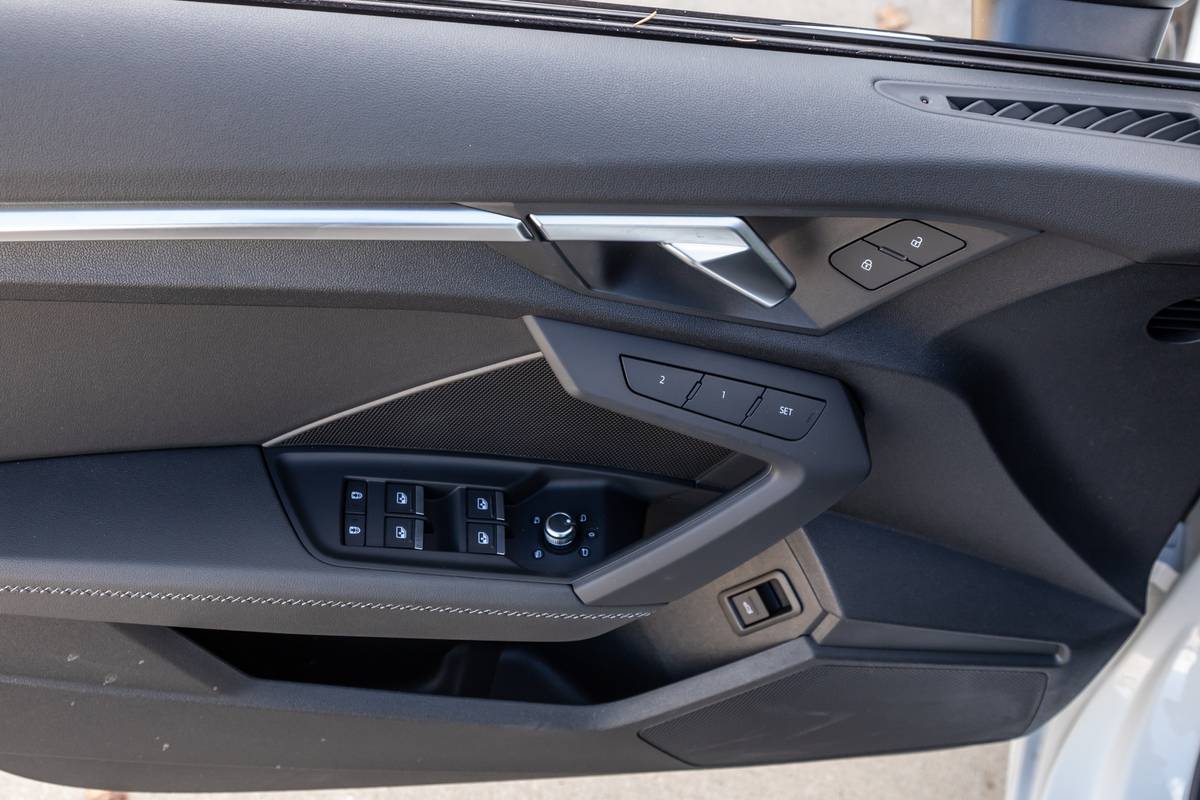 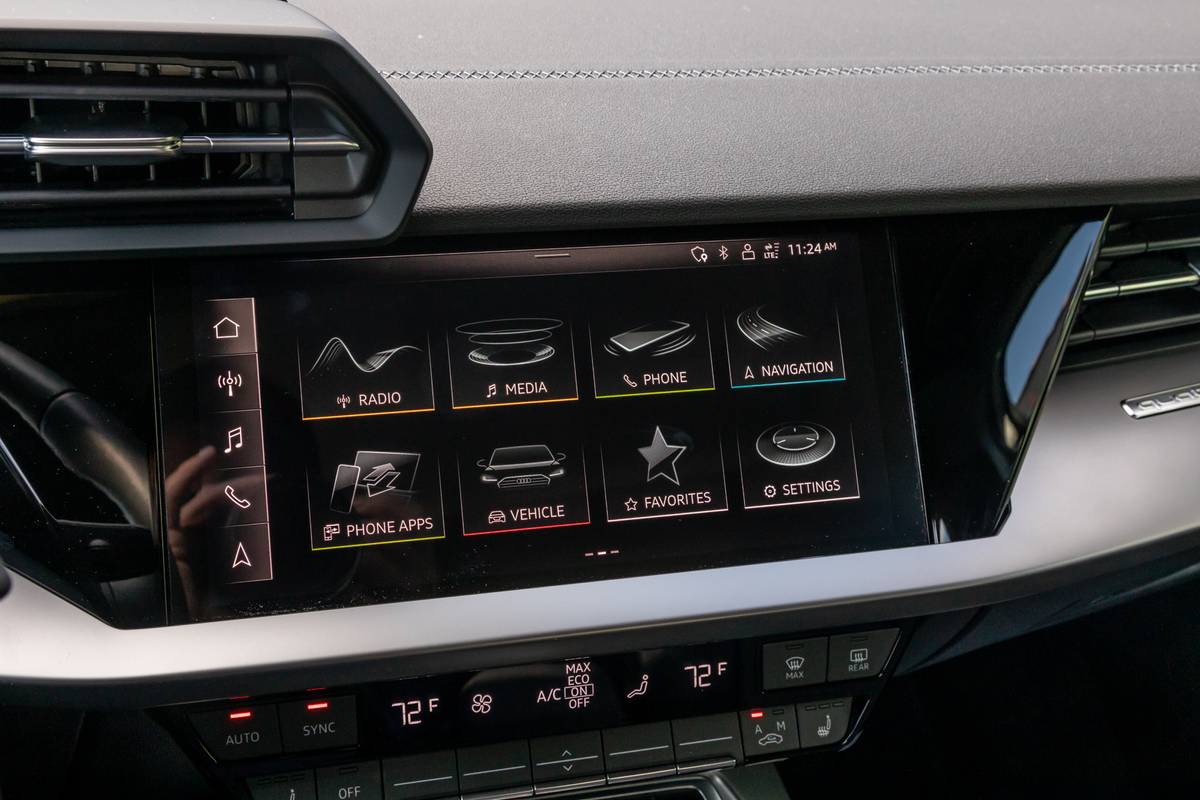 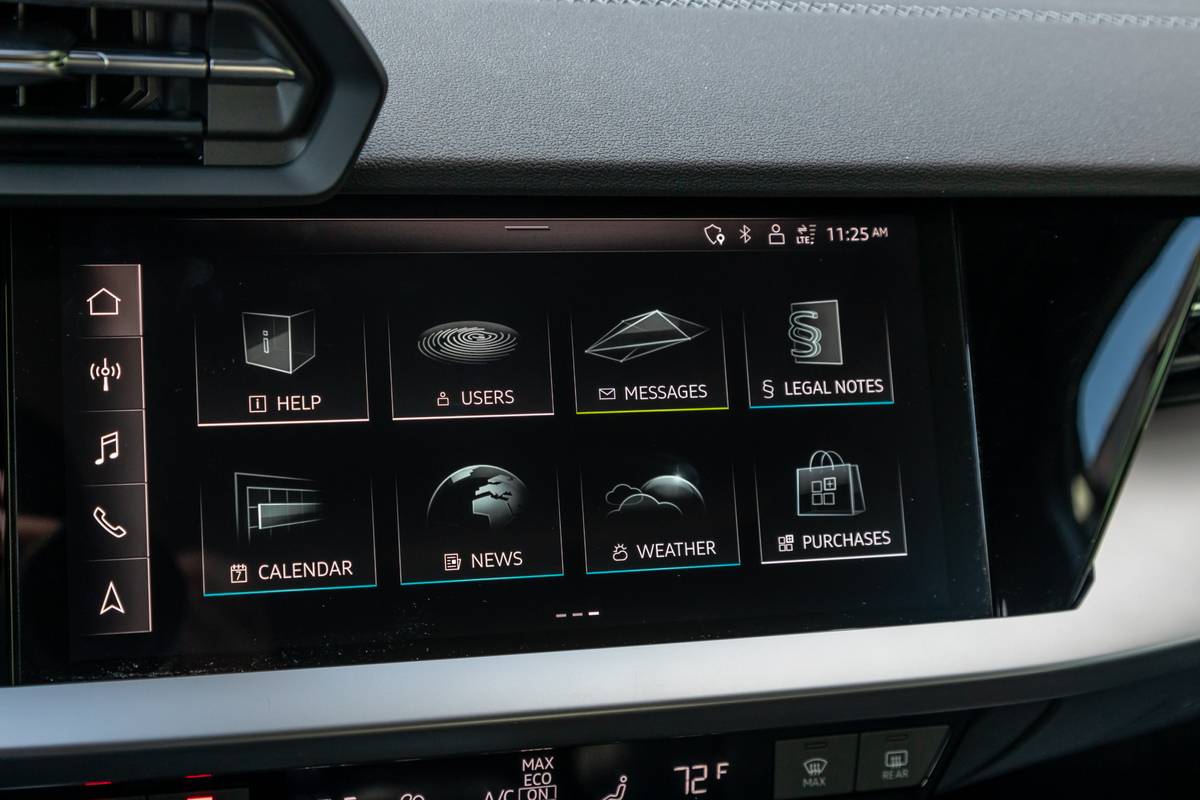 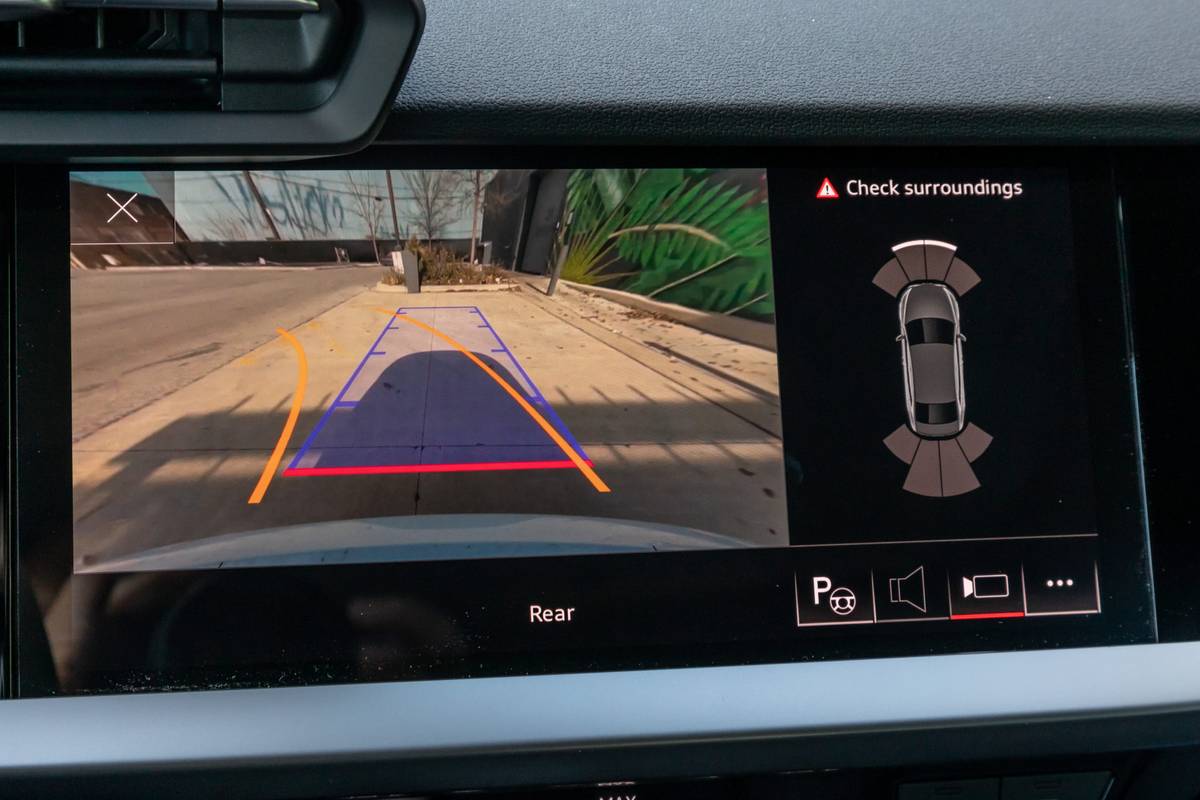 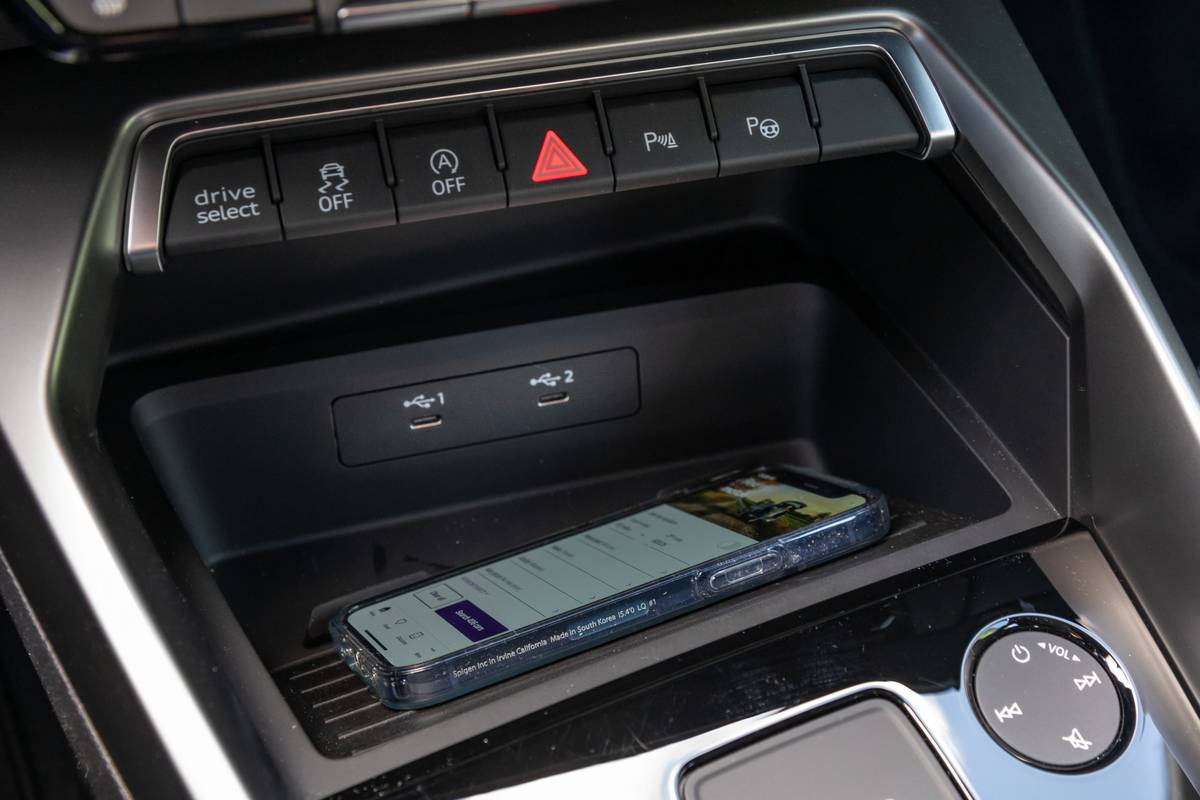 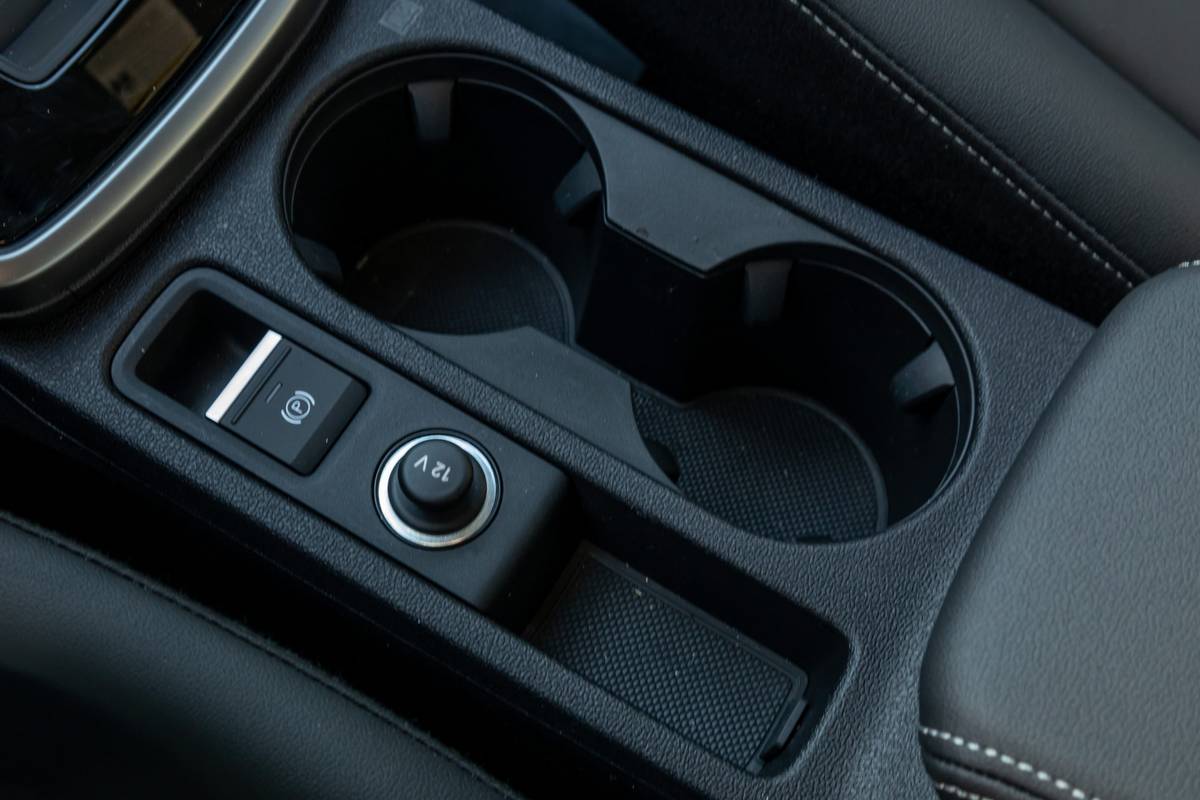 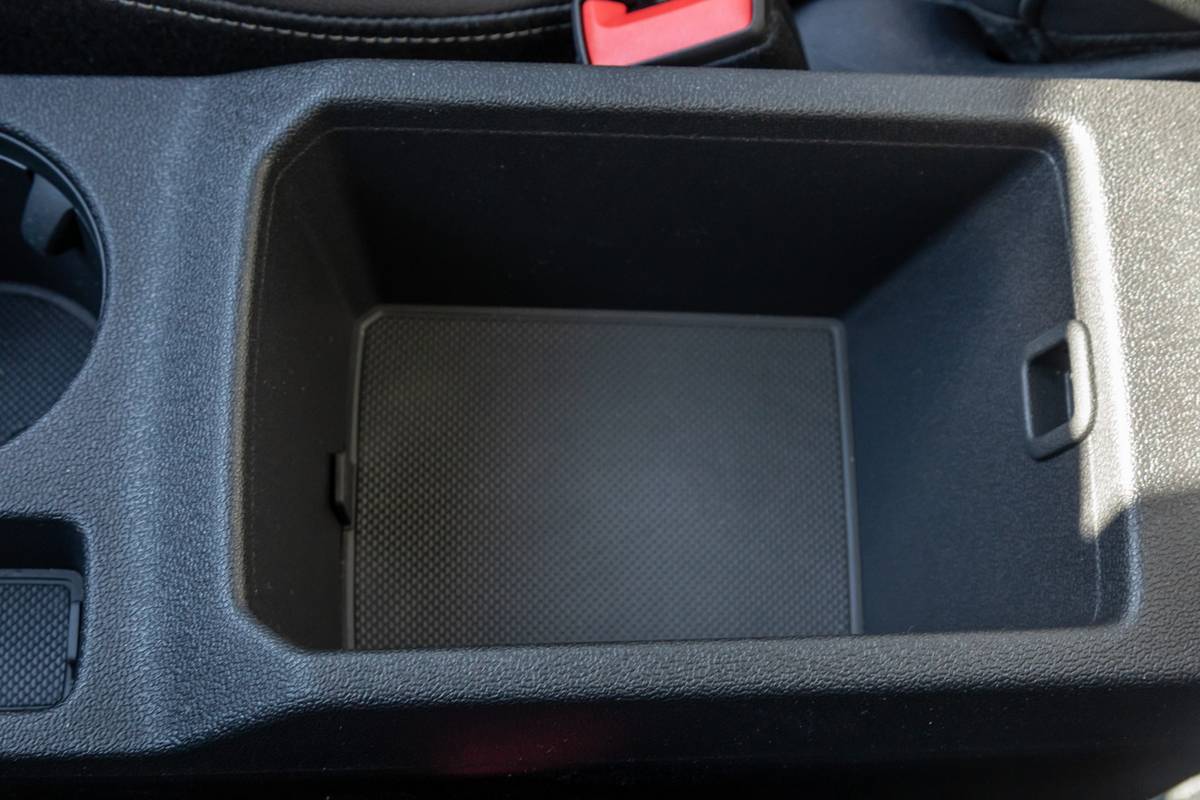 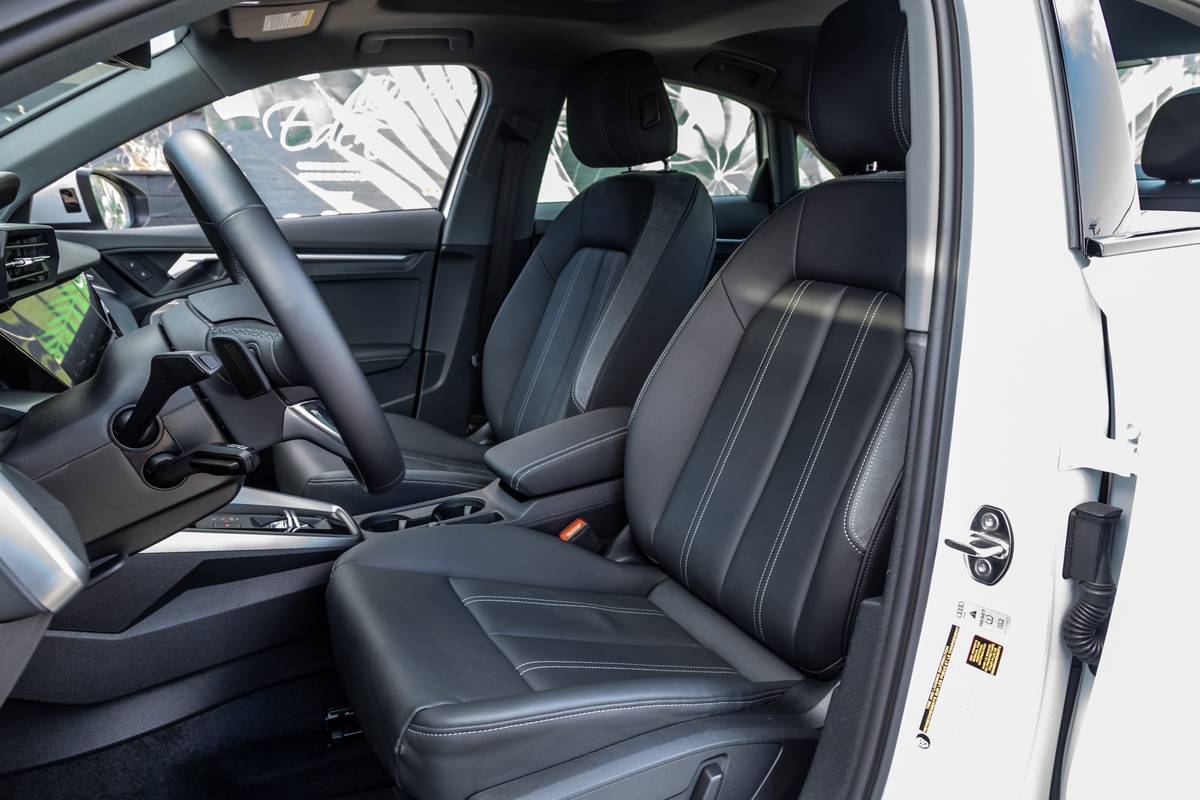 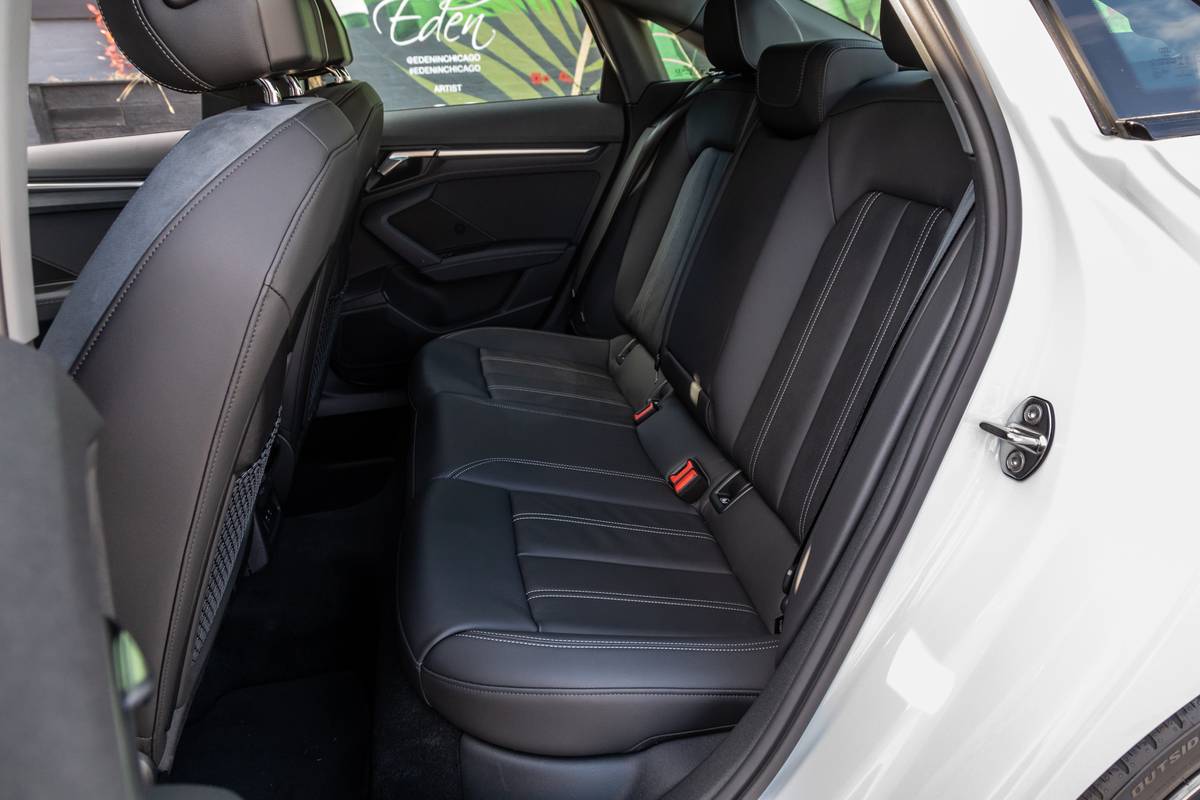 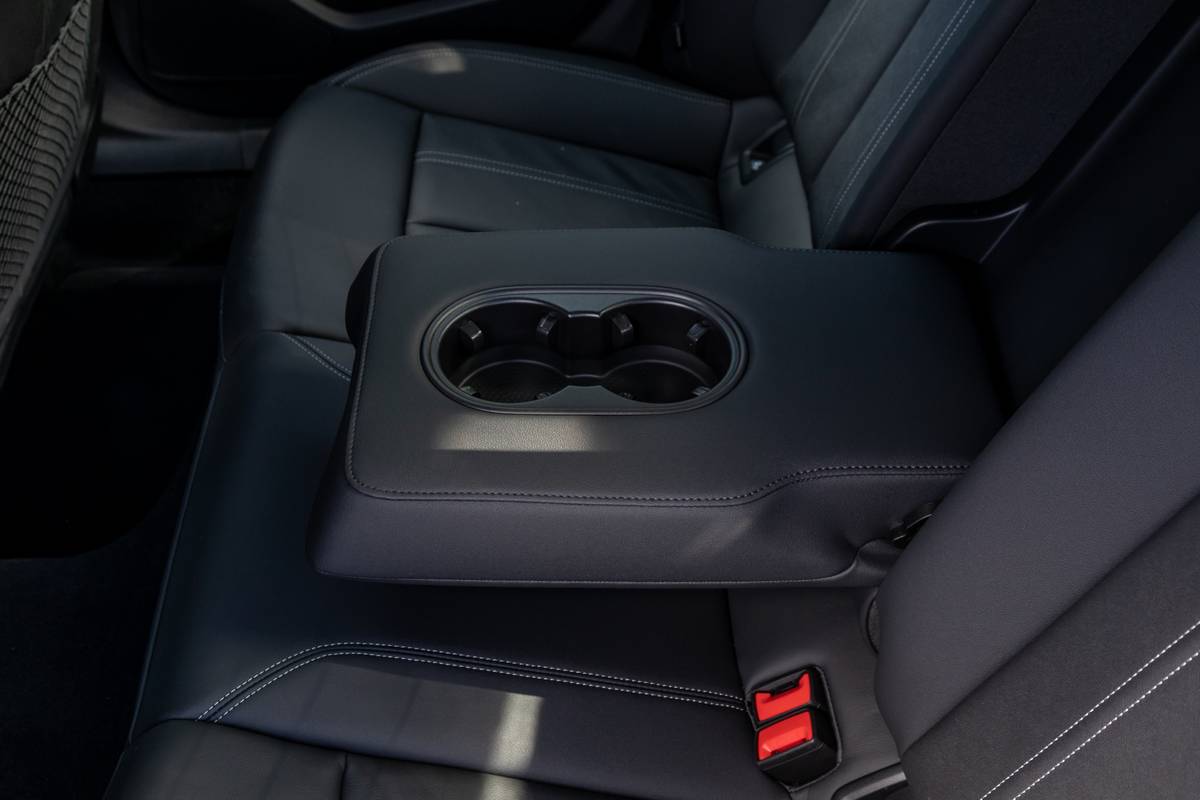 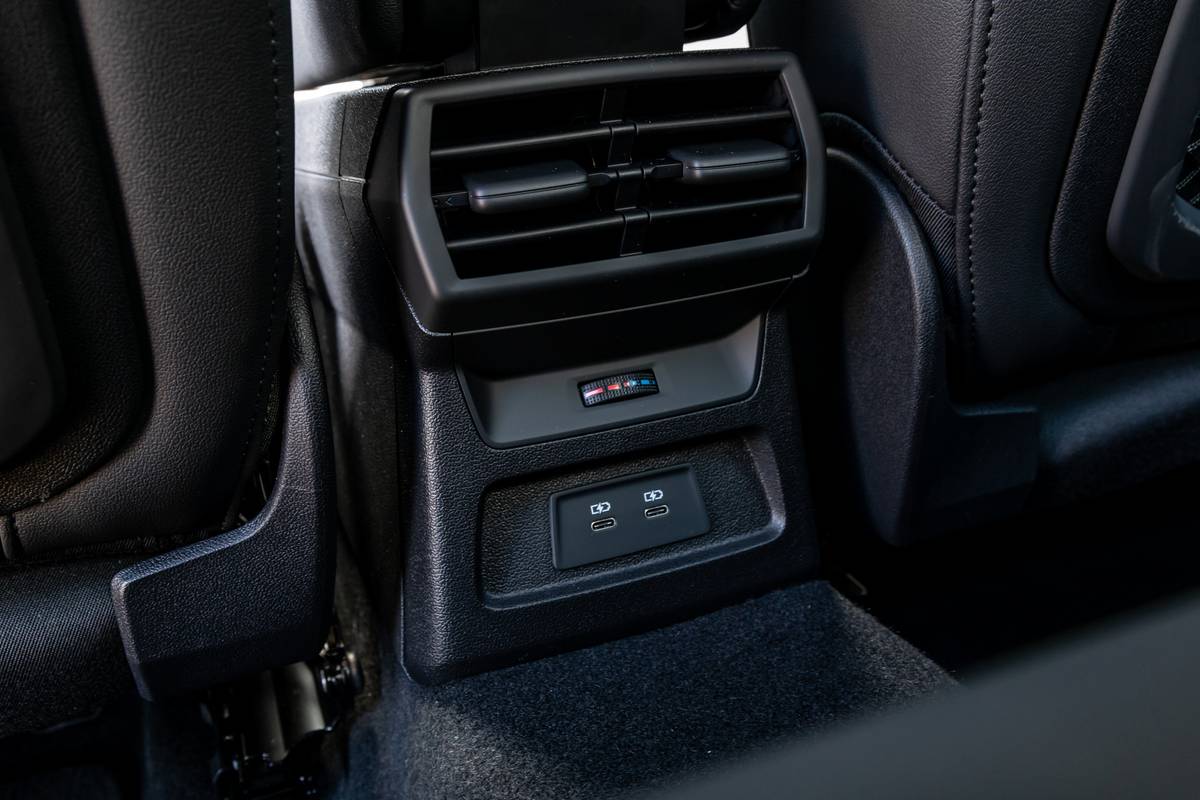 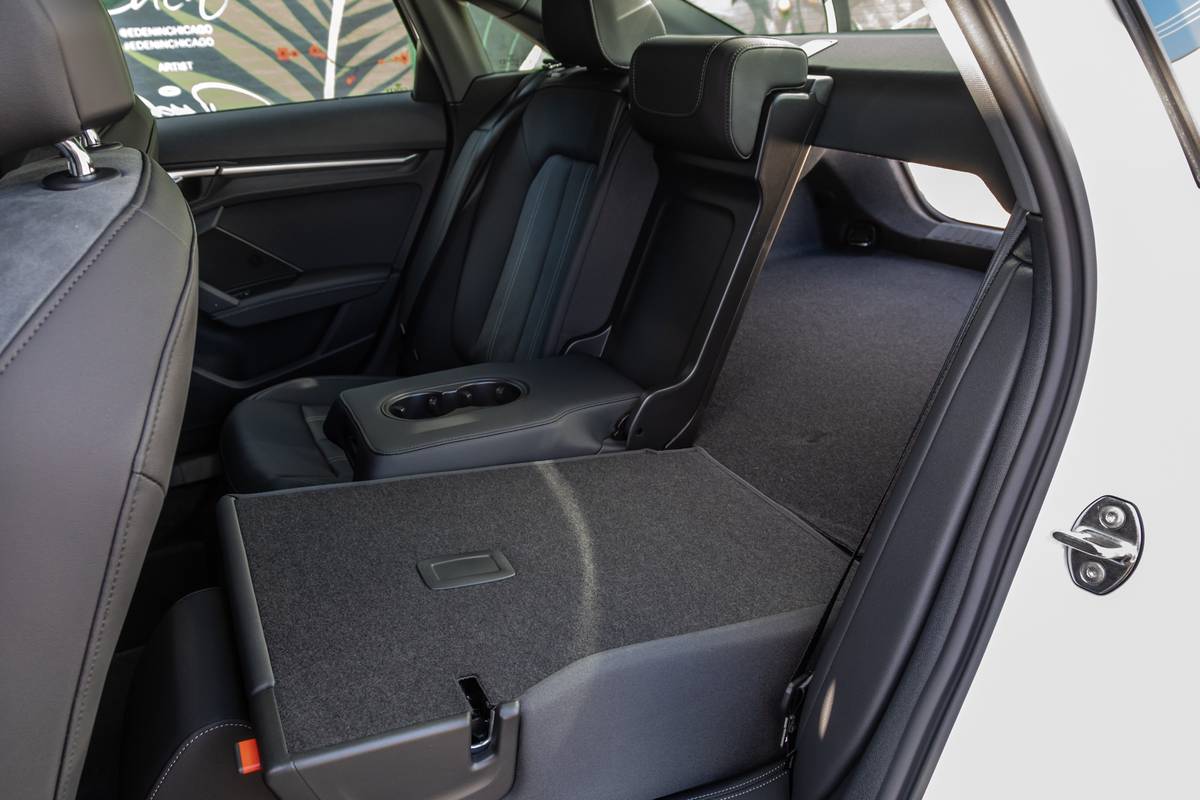 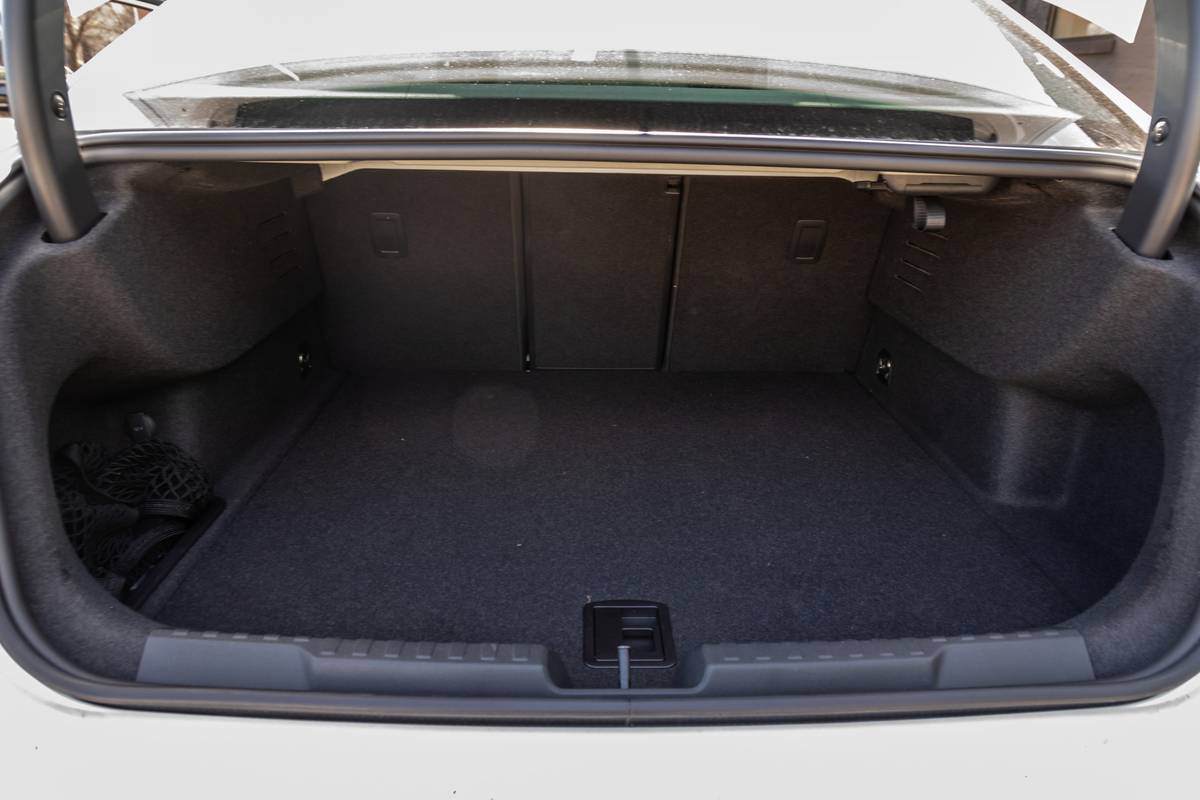 The A3’s interior has physical buttons in most areas, save a pod of touch-sensitive stereo controls — including the dreaded volume slider — on the center console. Still, I’ll take this over the multiple-touchscreen overkill situation you’ll find in many pricier Audis. A single dashboard touchscreen in the A3 and S3 measures a diagonal 10.1 inches, though its widescreen ratio makes the displayed area smaller than that spec suggests. Wireless Apple CarPlay and Android Auto integration are standard, as is a 10.25-inch digital gauge display. A larger (12.3-inch) unit is optional.

Passenger space is in short supply. The front seats afford good sliding range but narrow berths, clapping their occupants’ knees against the doors and console. Backseat legroom is acceptable for what these cars are, but the low bench means adult passengers’ knees will be uncomfortably elevated — and there’s no payoff in headroom. In our evaluation of car-seat accommodations, the A3 had easy-access Latch anchors, but fitting our rear-facing infant and convertible seats required moving the front passenger seat so far forward, most adults couldn’t comfortably sit there.

Our independent accounting of cargo volume turned up just 12.82 cubic feet of space in the A3. That’s less than the Cadillac CT4 (13.68 cubic feet), not to mention most non-luxury compact sedans (compare Cars.com cargo specs for the A3 against other cars of various sizes and body styles). Any way you slice it, the A3 is snug.

Of course, that’s to be expected of an entry-level luxury sedan, but Audi’s inconsistent interior quality is less excusable. Uncharacteristic of a brand known for handsome interior finishes, the A3 and S3 sport big ribbons of low-rent, grainy plastic near the door handles and gear selector, and once you get to the rear doors, you’ll find a degree of cost-cutting that smacks of a $20,000 compact car. Even the supposed soft-touch areas up front are just barely that; it’s a check-the-box mindset that smacks of bean counters. Granted, price constraints for entry-level luxury cars have always forced tough decisions about what areas to invest in, but the skimping is obvious in the A3 and S3.

The A3 starts at $34,945 (all prices include destination) with FWD, which is in the ballpark with other entry-luxury models. It’s well equipped at that, with standard heated leather seats and eight-way power adjustments, tri-zone climate control, a moonroof, lane departure warning with steering assist, and forward collision warning with automatic emergency braking. AWD is standard on the S3 ($45,945) and another $2,000 on the A3. Options include adaptive cruise control, hands-on lane centering, a Nappa leather upgrade, custom paint and the upsized virtual gauges. Loaded with factory options, the A3 tops out near $50,000, while the S3 can reach over $60,000.

Nicer interiors, more space and better drivetrains exist for similar money as the A3 — though not necessarily all in the same car, at least among luxury brands. (You can find that by stepping down to mass-market brands, which is a longstanding reality for lower-end luxury cars, but that’s a conversation for another day.) Somewhere in all this is an equation that works for a certain A3 shopper, and if you’ve read this entire review up to now, there’s a good chance you want in on that. Still, it’s dubious justification at best for a car with obvious flaws.

The S3 is a different beast. It’s just as cramped and penny-pinched as the A3, but it combines buckets of extra power with a less objectionable transmission, addressing what could be a deal-breaking flaw of the A3. If there’s a palatable car in the A3/S3, it’s on the backside of the alphabet.