The verdict: It got a lovely styling update, but a stiff ride and the proliferation of touch-sensitive controls haven’t made the new Audi A6 better than the old one.

Versus the competition: The field is thick with sportier alternatives (like the BMW 5 Series), more luxurious ones (the Mercedes-Benz E-Class) and some that can be had either way (Genesis G80), but few are as visually stylish as the A6.

When thinking of the generic, average mid-size European luxury sedan, the Audi A6 is a good image to keep in your head. It’s always been a cross between the luxury of the Mercedes-Benz E-Class and the sportiness of the BMW 5 Series. Competent, comfortable and long the benchmark for interior quality, the A6 keeps a lot of the things we’ve always enjoyed about it in its latest all-new version, the 2019 A6 3.0T Quattro. But some things have changed for the worse, including some basic things on the interior as well as the way the A6 rides and drives. Are the changes enough to sully our impression of the A6 overall, or are they minor quibbles with Audi’s latest effort in the mid-size luxury sedan category?

One area where Audi has been successful with the new A6 is exterior styling. Yes, it’s a continuation of the “one sausage, many sizes” idea that has defined Audi sedans for decades now, but we don’t mind at all when the overall shape looks this good. The A6 has gone from being bland to mildly stylish to truly lovely in this latest iteration. It’s all in the details: The way that character line starts up front at the headlights, sweeps down the side and ends at the taillights is pure artistry. It gives the A6 a long, low look that adds presence to the styling and keeps onlookers interested. The latest LED headlights and taillights are yet more artistry, especially when you lock or unlock the vehicle. They do a dance routine that will have you using the key fob to lock and unlock the car as you approach or leave it, just so you can watch the miniature fireworks show. 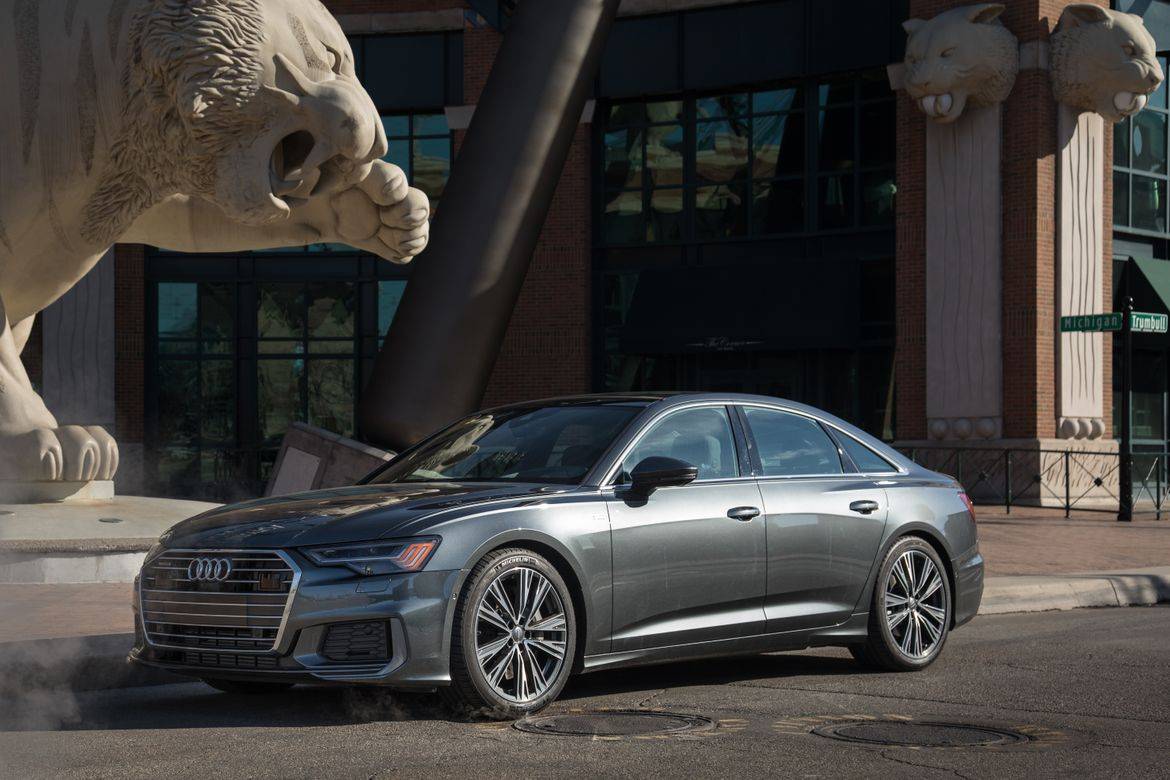 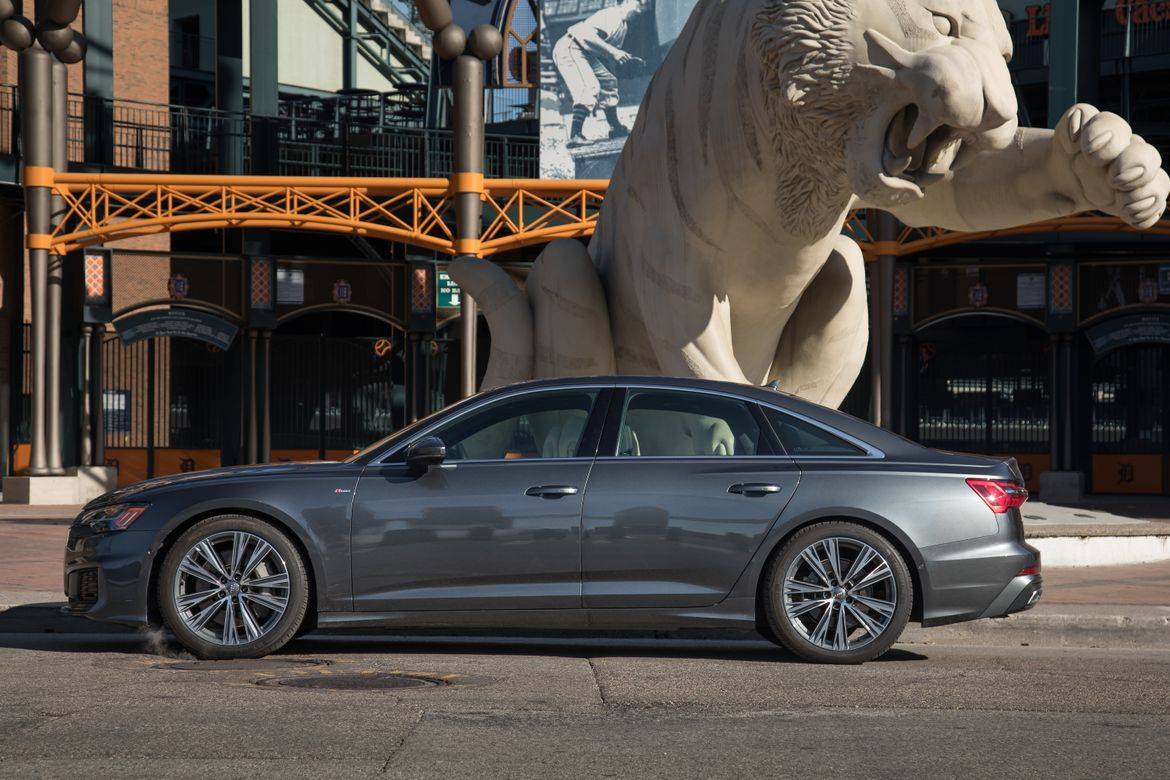 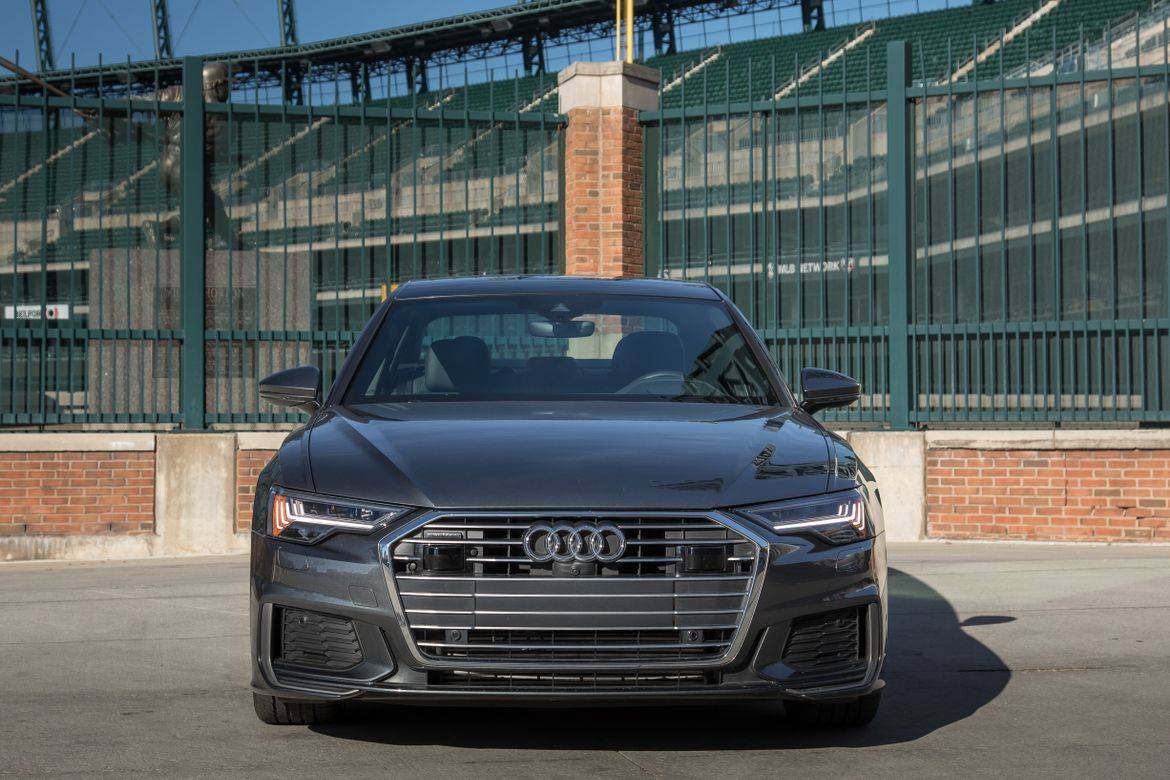 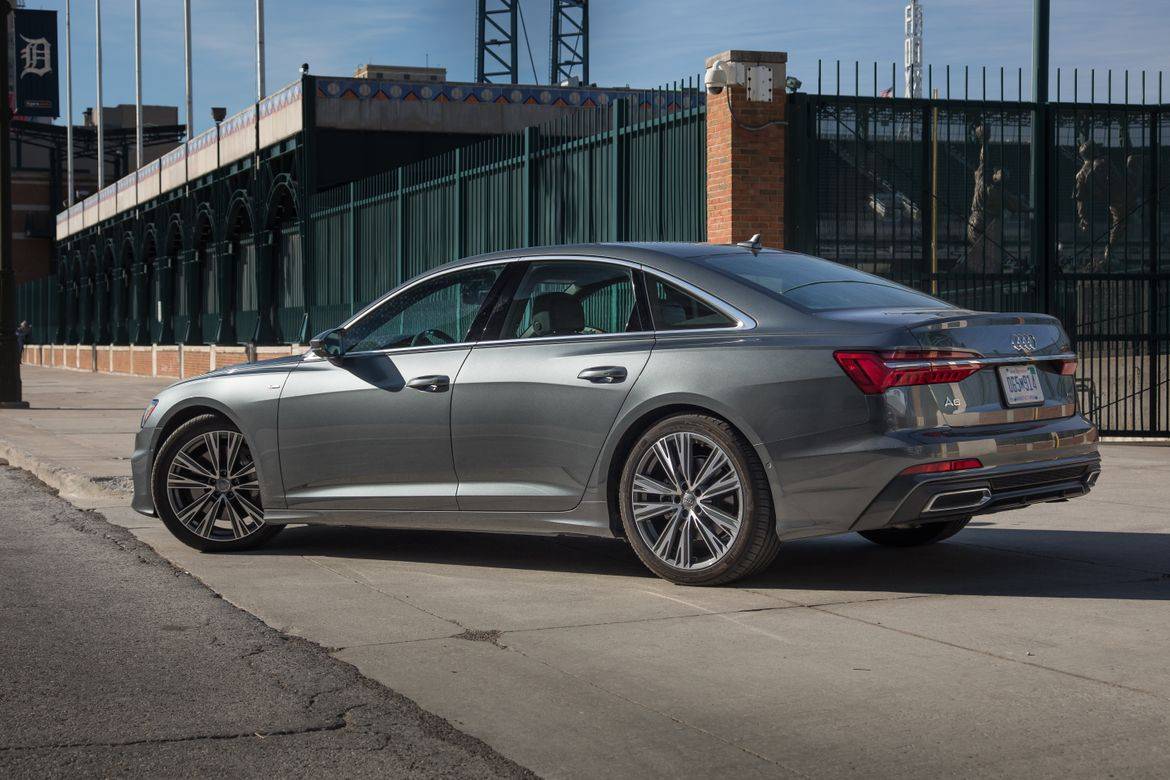 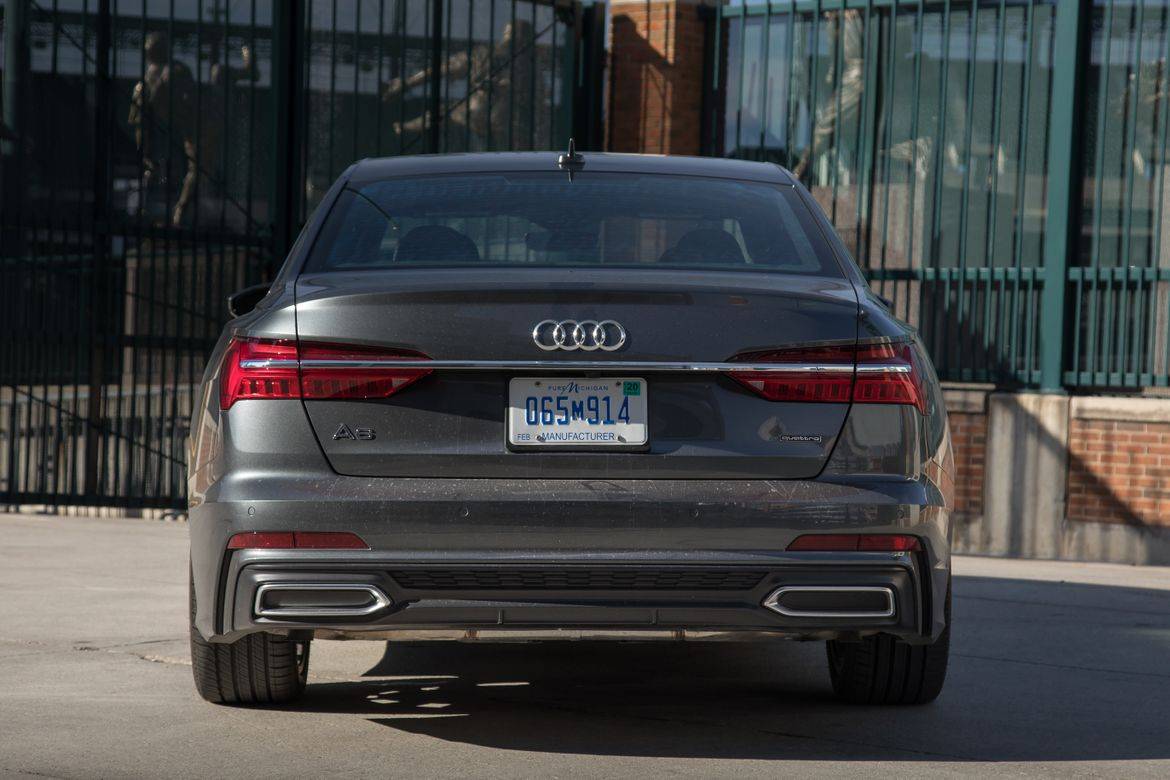 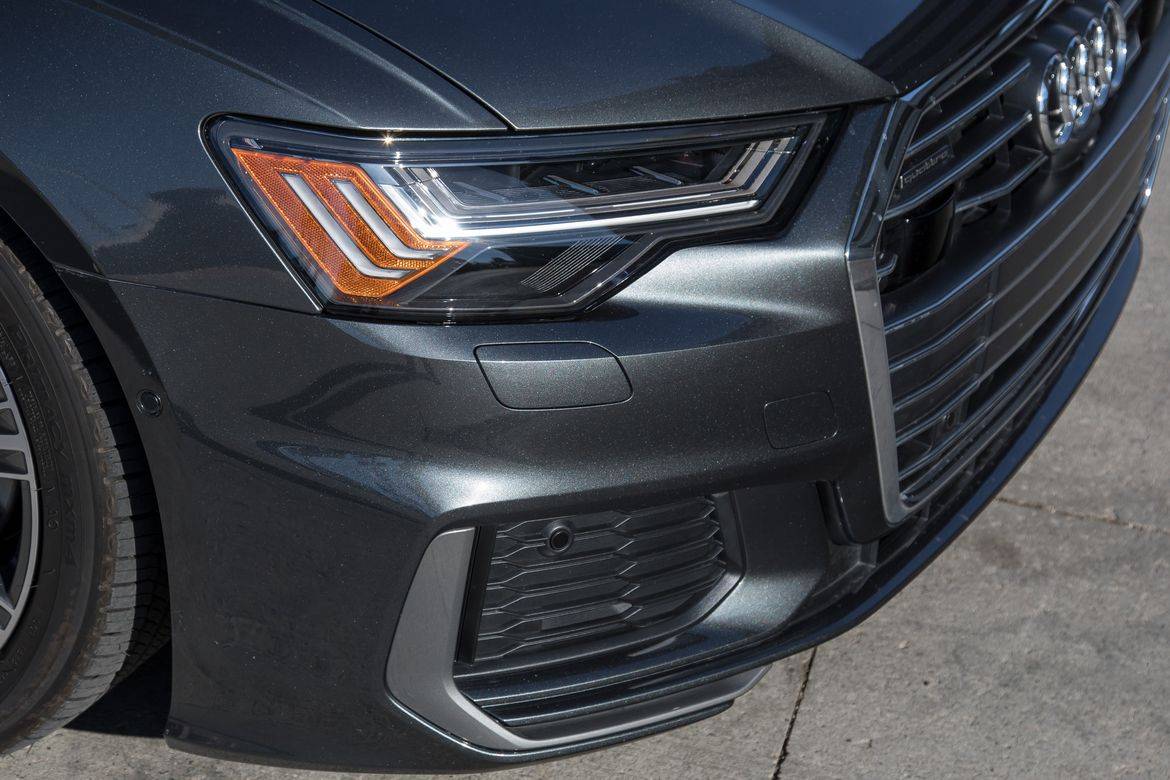 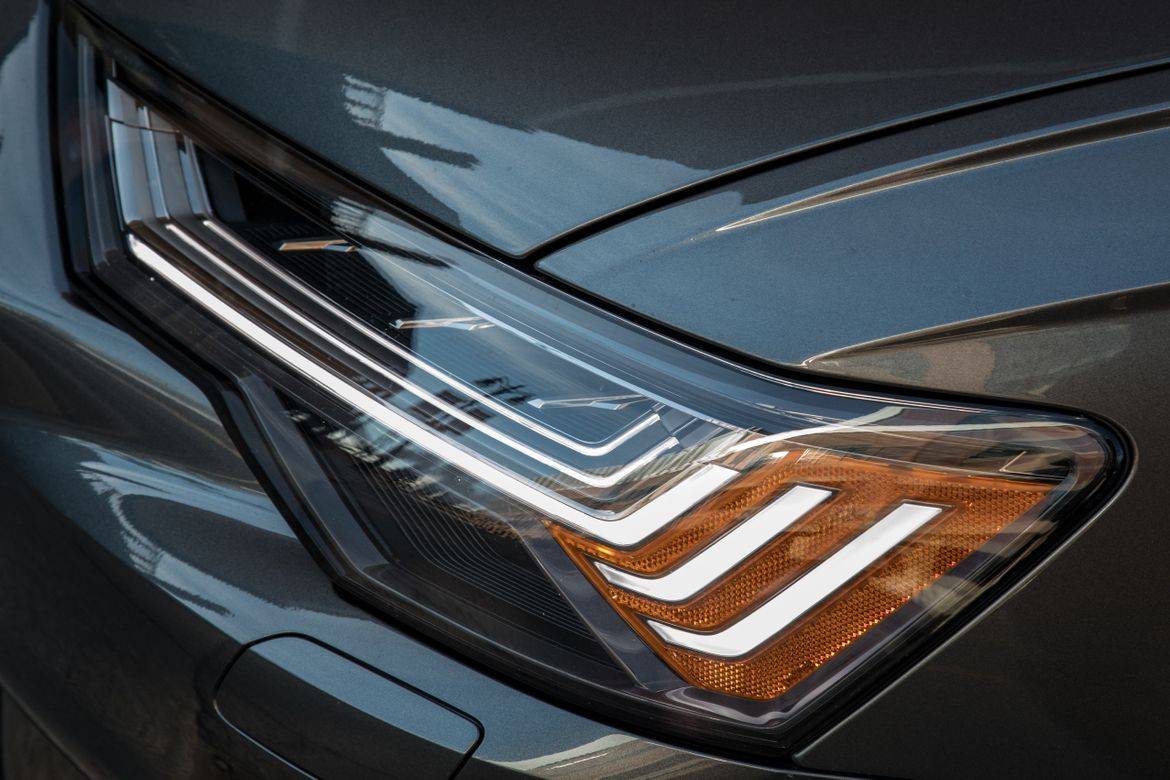 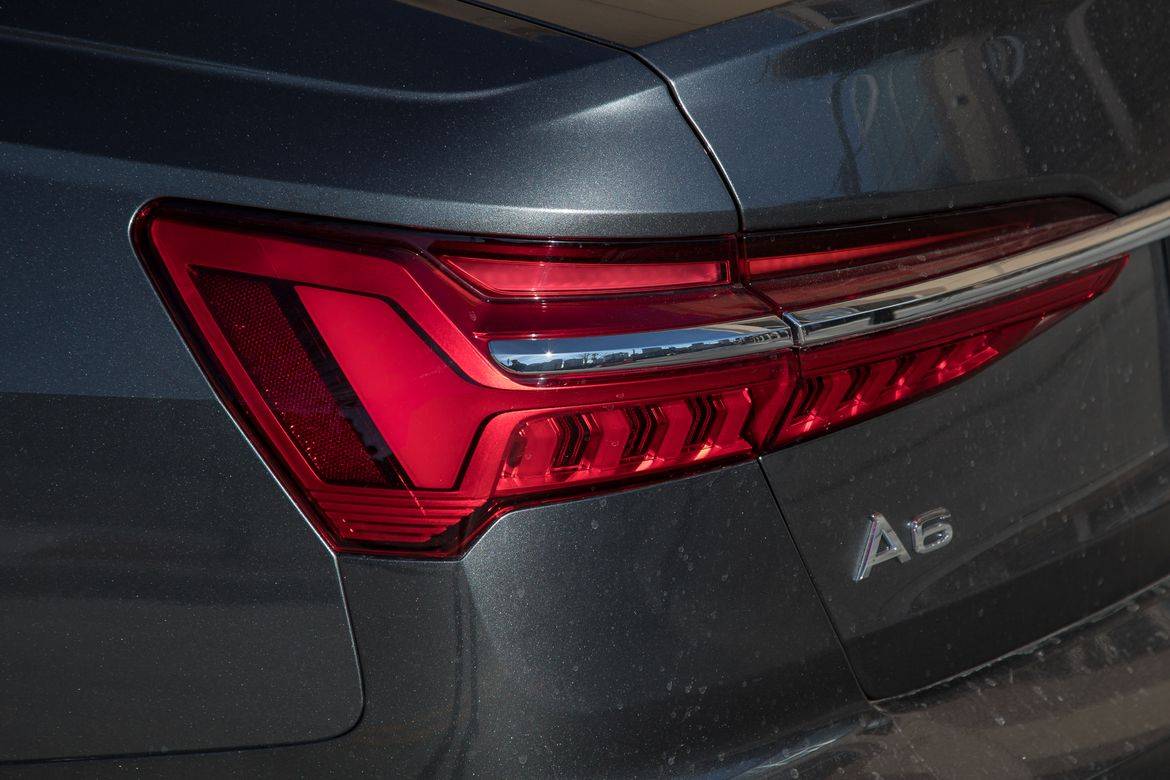 Driving Experience Isn’t What It Was

Powering the A6 is a 3.0-liter turbocharged V-6 engine making a healthy 335 horsepower and 369 pounds-feet of torque, mated to a standard seven-speed automatic transmission. Arriving late is a new 248-horsepower, turbocharged 2.0-liter four-cylinder that serves as the base engine, down 4 hp from 2018. Audi’s Quattro all-wheel drive is standard on the A6 for 2019.

Despite having plenty of power on paper, the A6 doesn’t feel sprightly or quick; powertrain tuning has been tilted toward calm, sedate motoring instead of aggressive, entertaining performance. The new A6 sports a 48-volt electrical architecture that includes a mild-hybrid powertrain system, but the transmission feels slow to shift and eager to keep the car in low gears to maximize fuel economy. It doesn’t seem to like cold mornings, either, exhibiting a reluctance to shift after sitting all night. Audi reports a zero-to-60-mph time of 5.1 seconds, but you’ll have to go hunting for that performance, as it feels hidden behind a more relaxed approach. Switching into Sport mode doesn’t seem to do much for its responses, so you may as well leave it in Comfort.

Steering is accurate but doesn’t provide much in the way of feel or feedback. Sport mode adds some heft to the steering effort, but feedback is lacking — again, more signs of the A6 being skewed toward luxury. It makes the ride a little confounding; it’s surprisingly firm, even in the softest Comfort mode setting. A surprising amount of harshness and road imperfections are transmitted into the cabin. You could blame the 20-inch wheels that came on my car, but not the softer winter tires with which it was fitted (Audi swapped the Sport Package’s 21-inch wheels on my test car for 20-inch winter tires because it was Michigan in January). Either way, the A6 feels like an odd mix of relaxed powertrain and confused body control.

If you’re seeking a more sporting flavor for your mid-size Audi, take a look at the S6, which is decidedly spicier. But if you want something sportier for the same money, the BMW 540i and Genesis G80 5.0 are worth a look. The 540i matches the A6’s power output but with a rear-biased chassis, and the G80 offers up a much more powerful 5.0-liter V-8 engine and all-wheel drive in a loaded trim that’s the same price as a base A6. If you’re seeking luxury over sport, the Mercedes-Benz E450 4Matic is hard to beat as long as you stay away from the lengthy (and expensive) options list.

Fuel economy is middle-of-the-road, with the A6 rated 22/29/25 mpg city/highway/combined on premium gas. They’re decent numbers — proof that the car’s mild hybrid system is indeed providing some benefit; my week of testing netted a solid 25.4 mpg in mixed use. The competition compared with the A6 here can’t match the Audi unless you go to their less-powerful four-cylinder versions, with the Mercedes-Benz E450 earning a 20/28/23 mpg rating while the BMW 540i scores 21/29/24 mpg. The Genesis G80 makes you pay for that big V-8, sliding in with a dismal 15/23/18 mpg rating, though if you want to save a little cash and still enjoy a powerful luxury sedan with an outstanding engine, the 3.3-liter turbocharged V-6 G80 Sport is rated a better (but still bad) 17/24/20 mpg.

A Lesson to be Learned, Inside

Audi gives the interior the same design attention as the sheet metal, crafting a stunning, modern, sumptuous cabin that’s a visual delight. The modern design language of sharp angles and creative lighting is quite distinctive and attractive, but a problem is starting to rear its ugly head in the latest Volkswagen Group products, including this Audi: touch-sensitive panels instead of buttons. For climate control, audio and various other functions, the Audi A6 features two large touchscreen panels on the center console. They look pretty slick, but they don’t work well. 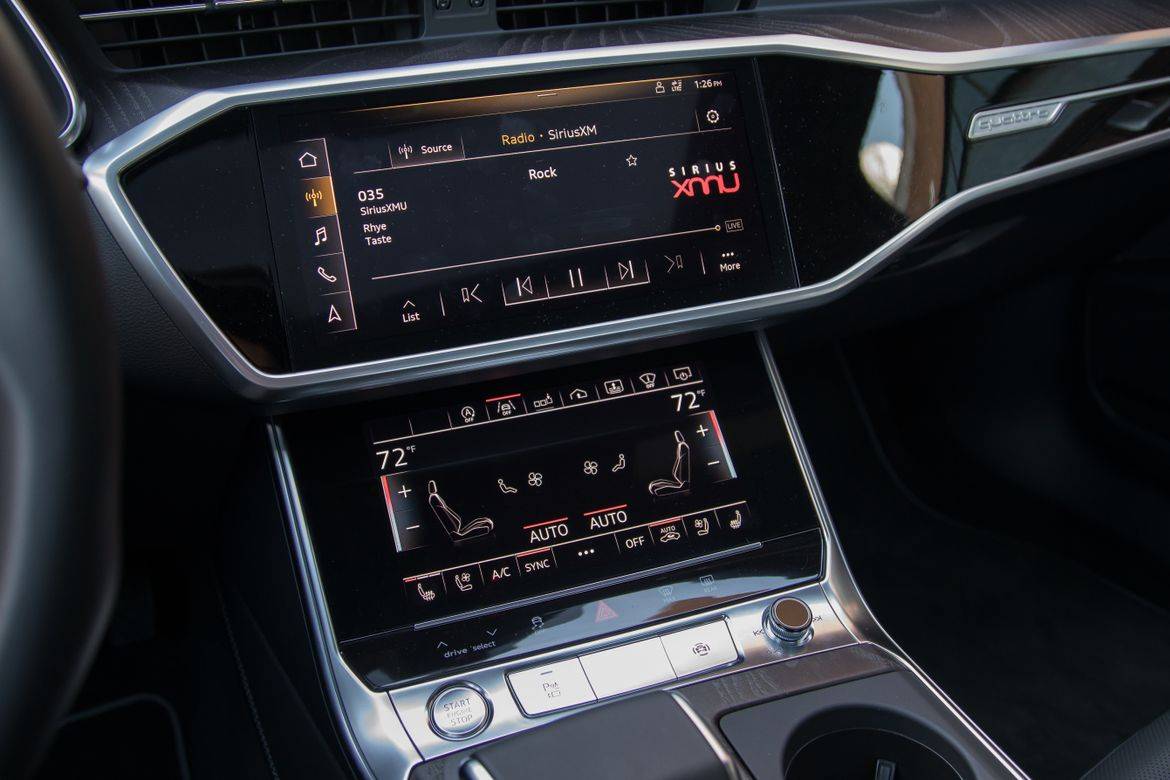 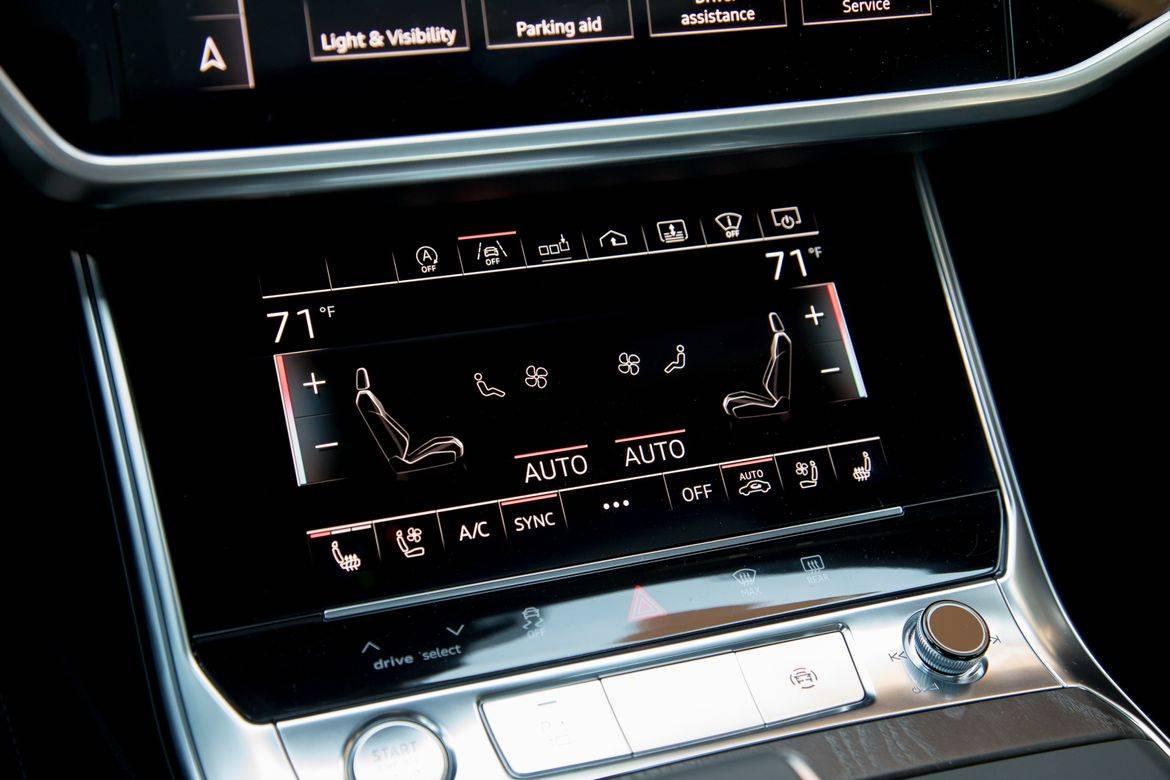 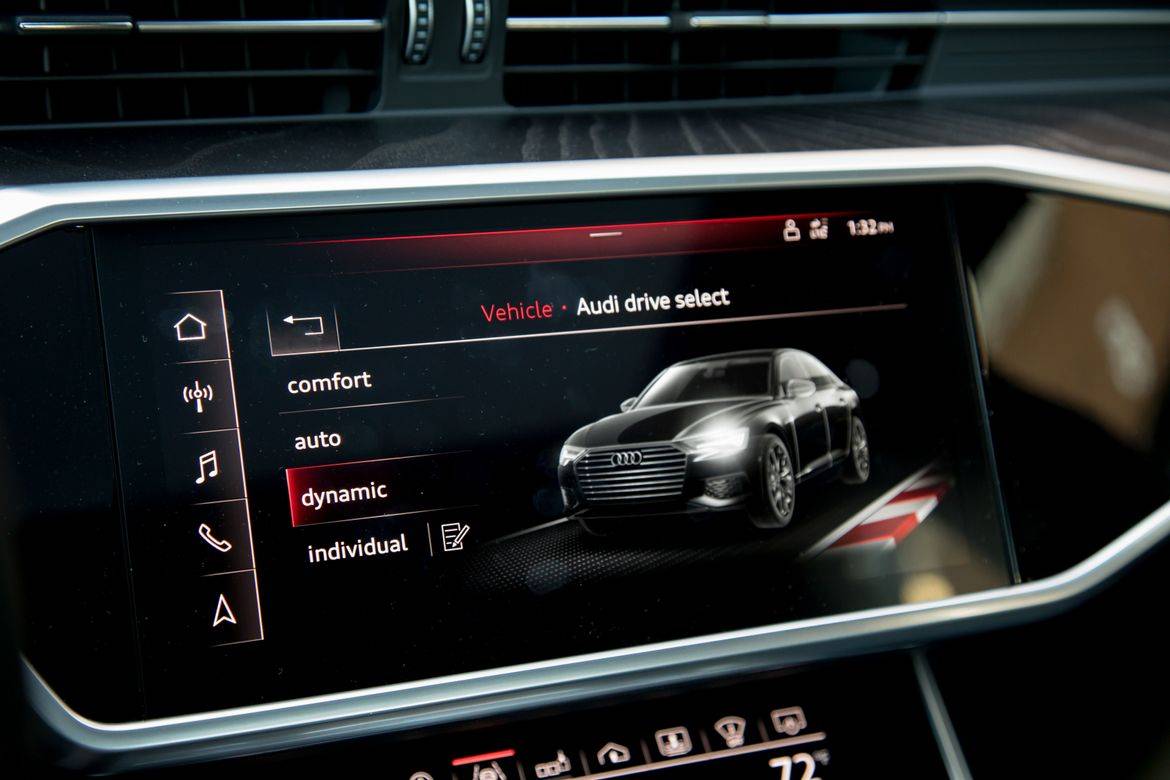 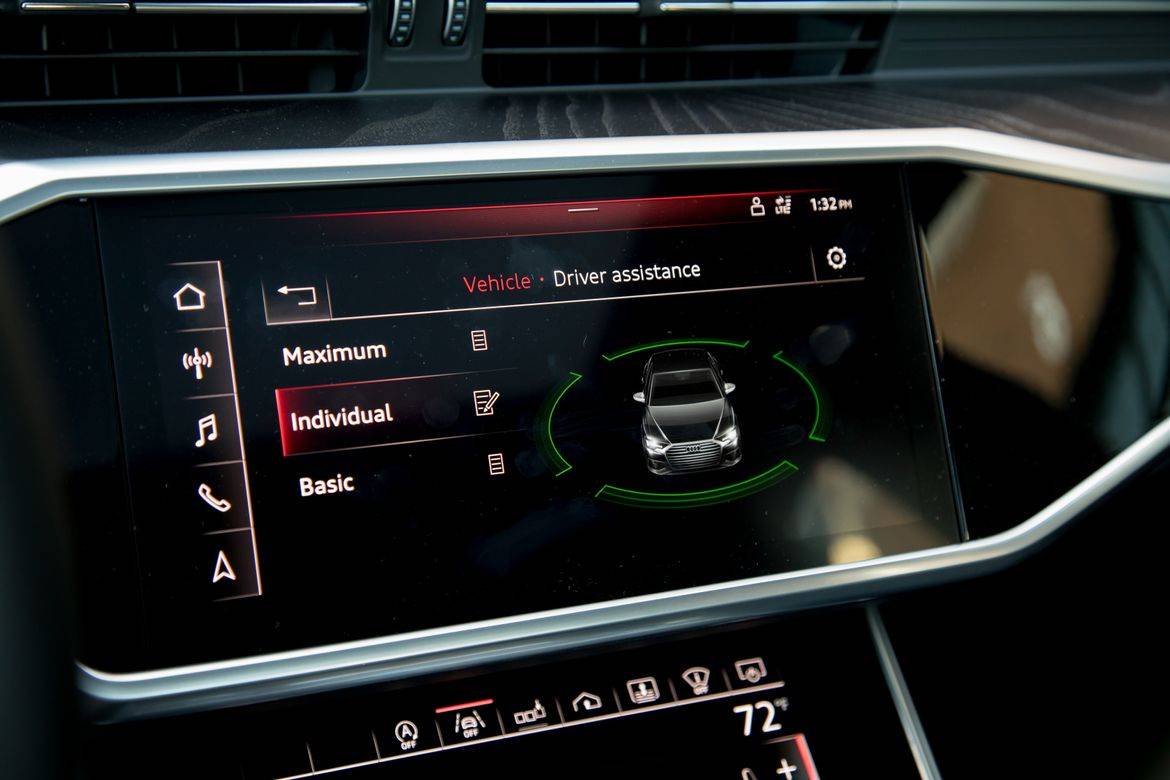 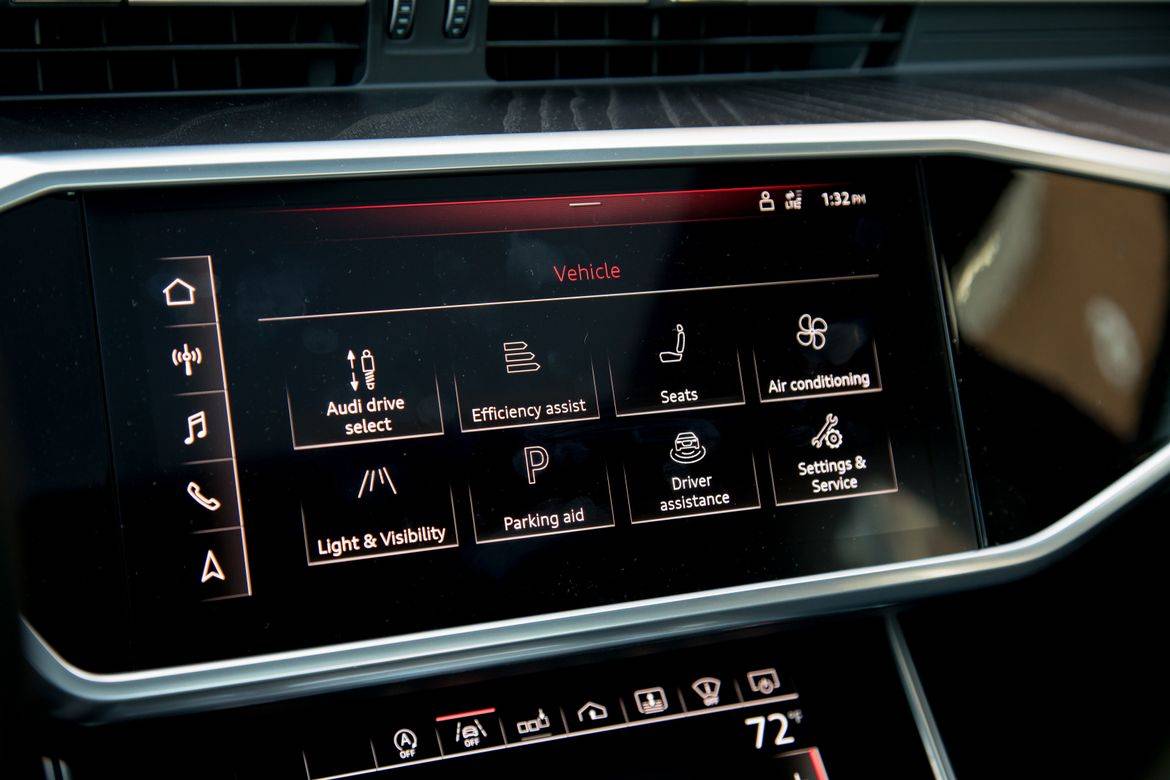 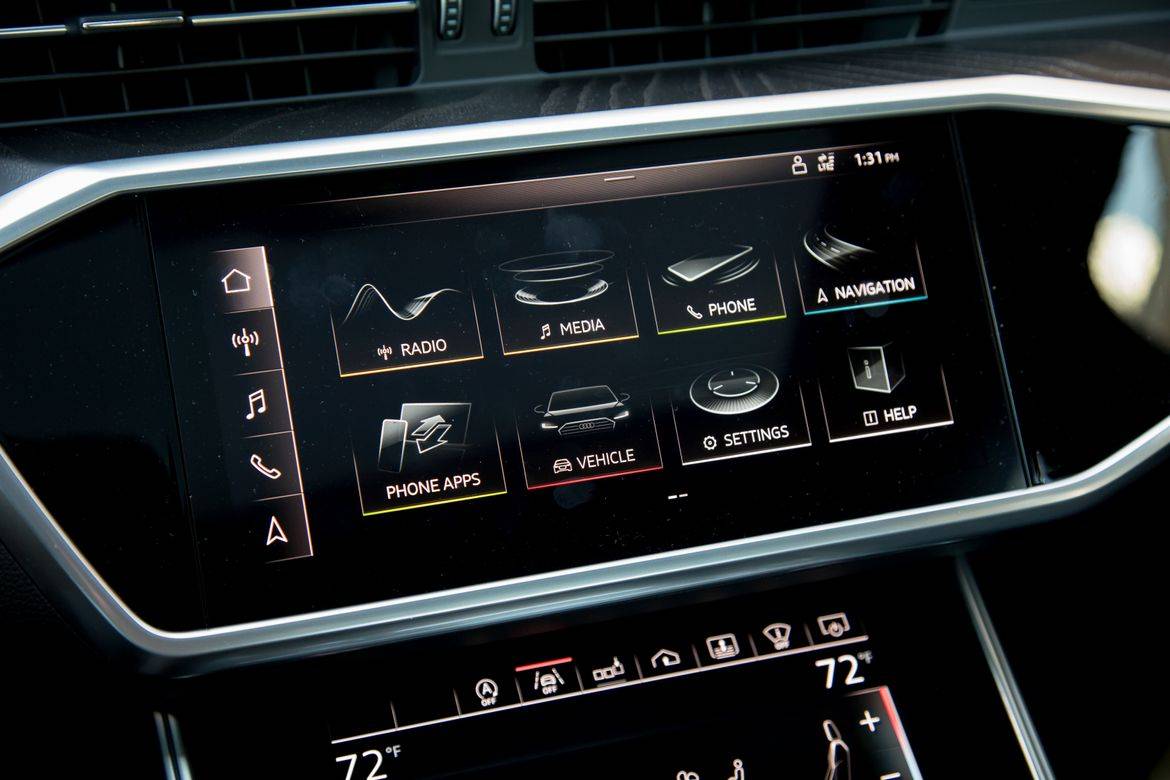 The problem is, you can’t tell if you’ve successfully pushed the button you wanted without looking at it. Audi has added neat audible and tactile feedback to its touch panels, but sometimes they lie, providing a noise and bump when you haven’t actually selected whatever it was you tried to turn off or on. I’d say about half the time I touched a control on the central climate-control screen — which also controls things like auto stop-start, the heated and ventilated seats, and lane keep assist — it gave false feedback, requiring me to look and push again. Audi says the displays “function in an intuitive manner, much like a smartphone.” But what’s the one thing you shouldn’t be using while driving? Your smartphone.

The fact that Audi’s parent company, Volkswagen, is planning to proliferate this system across all its models is dismaying. That Audi replaced the intuitive, top-notch rotary-dial-surrounded-by-four-buttons MMI system with it is even more unfortunate. It largely ruins what is otherwise a lovely, classy, high-tech interior that’s comfortable, spacious, silent and loaded with amenities. At night, the ambient lighting in the A6 turns the cockpit into something out of a “Tron” movie (in a really good way). Front and backseat comfort is top-notch, with plenty of legroom in both rows. Fit and finish, materials quality, outward visibility — it’s all excellent. Only the touch-sensitive flat plastic panels mar the overall experience. 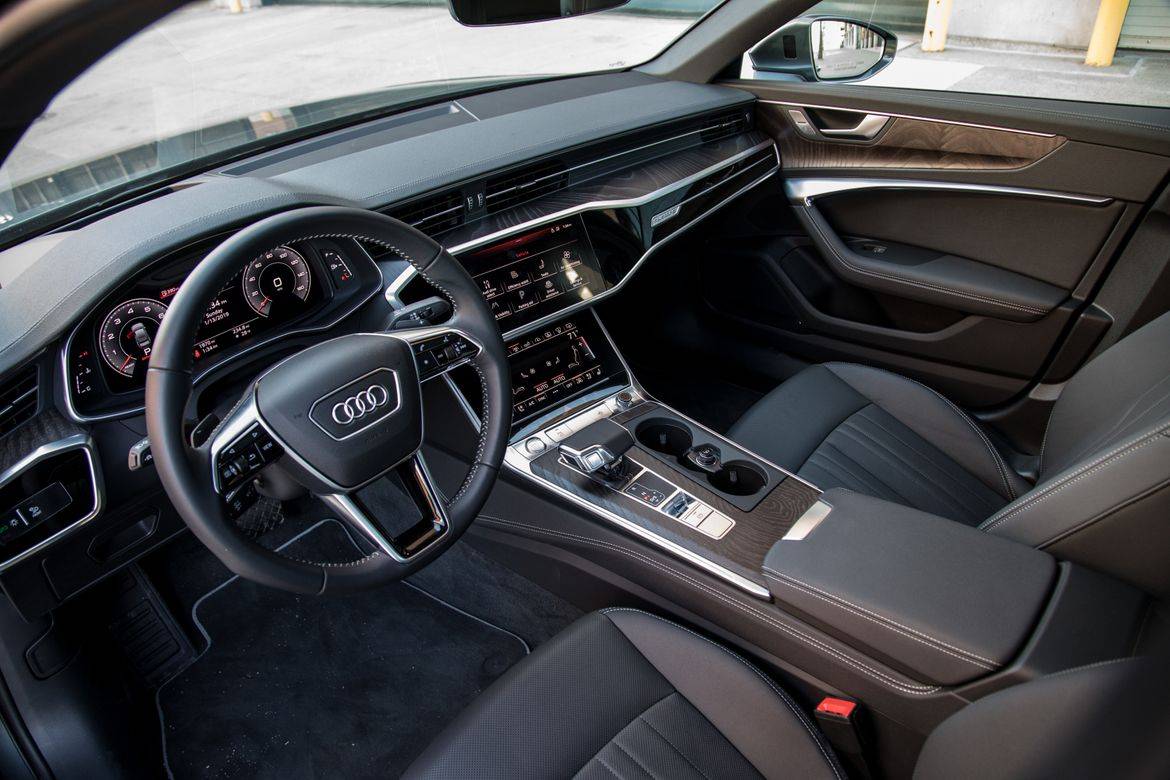 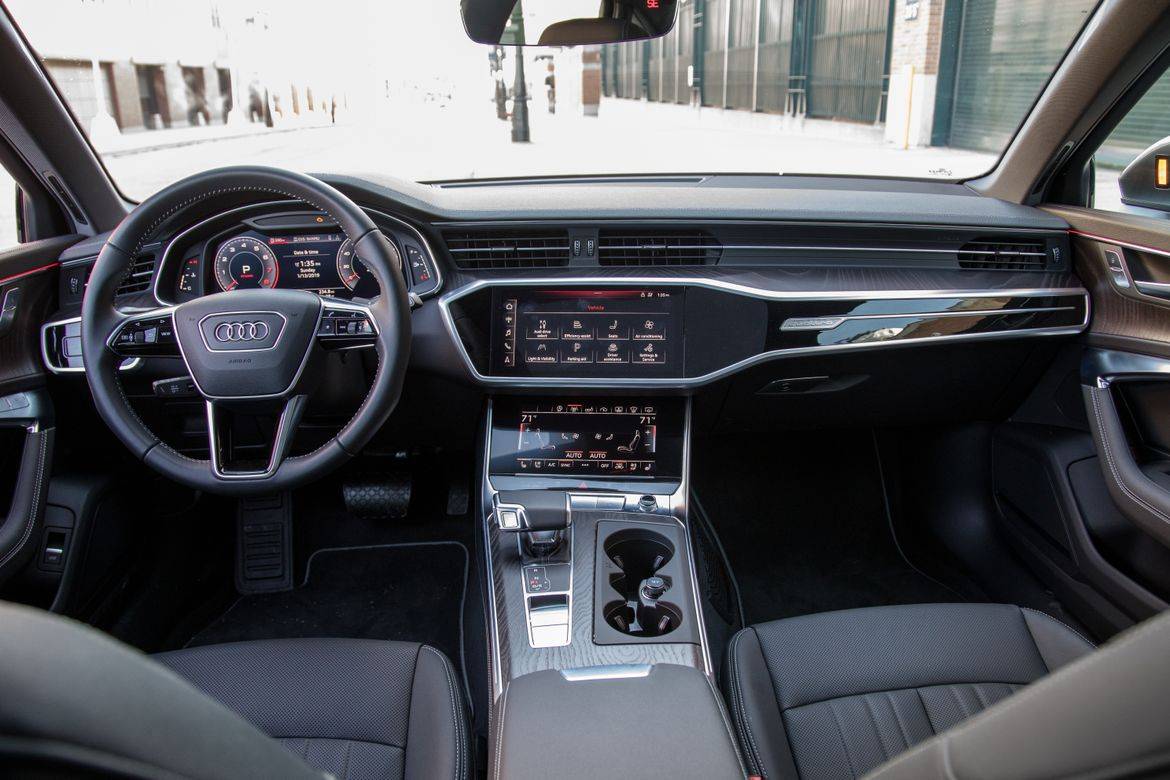 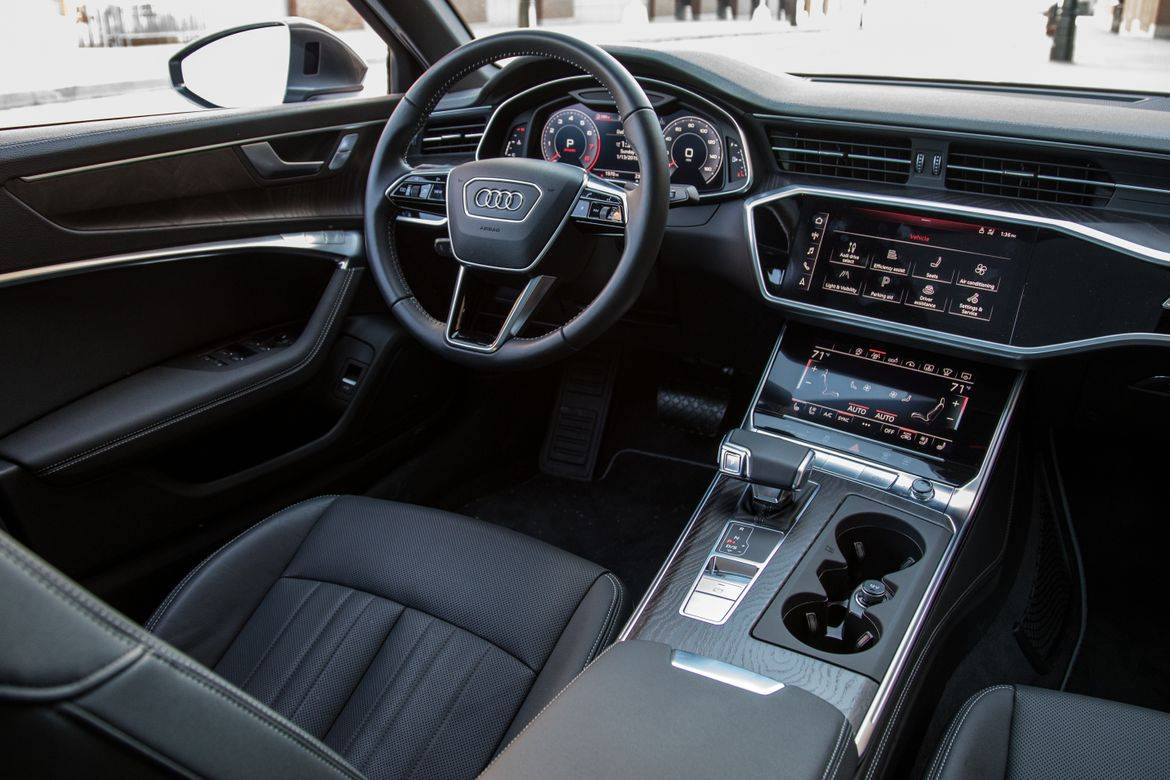 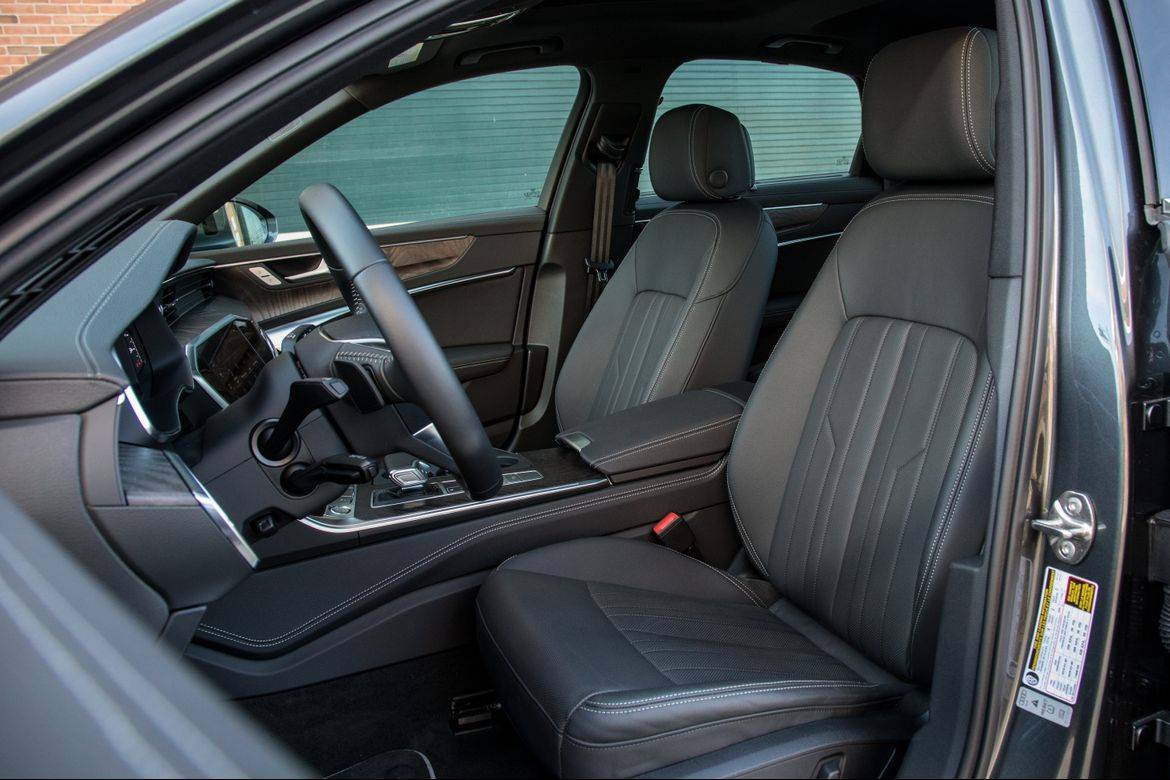 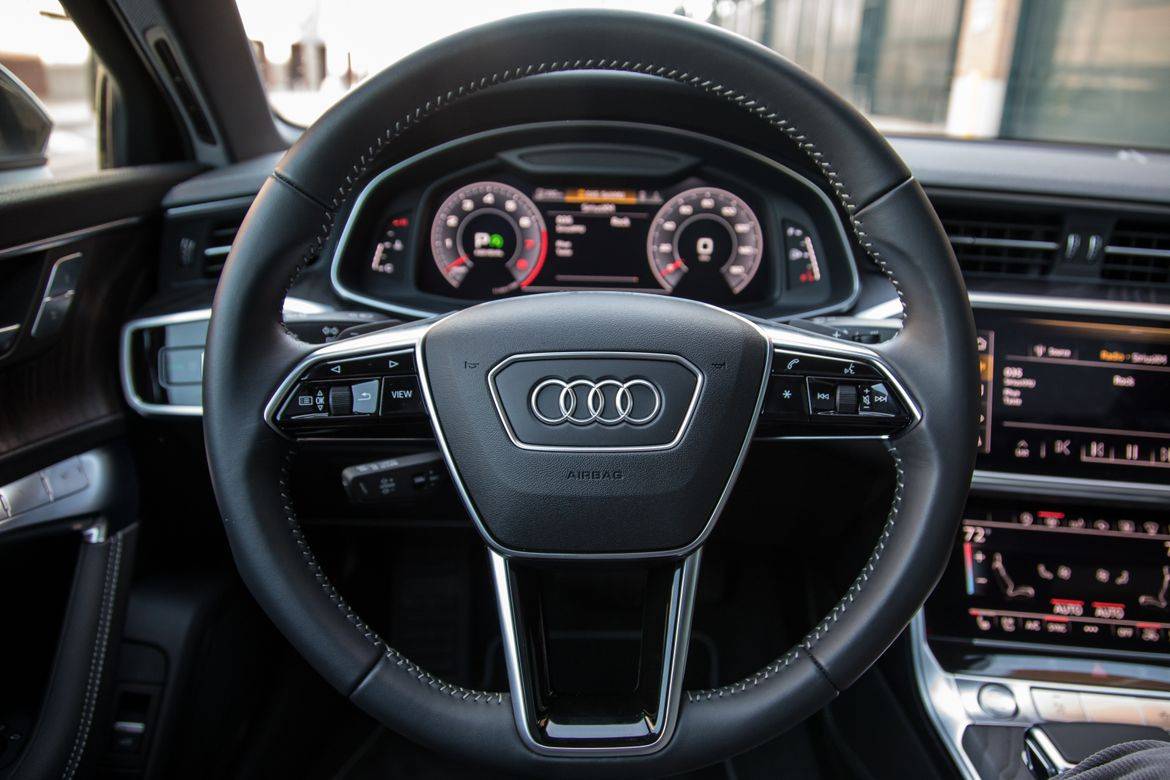 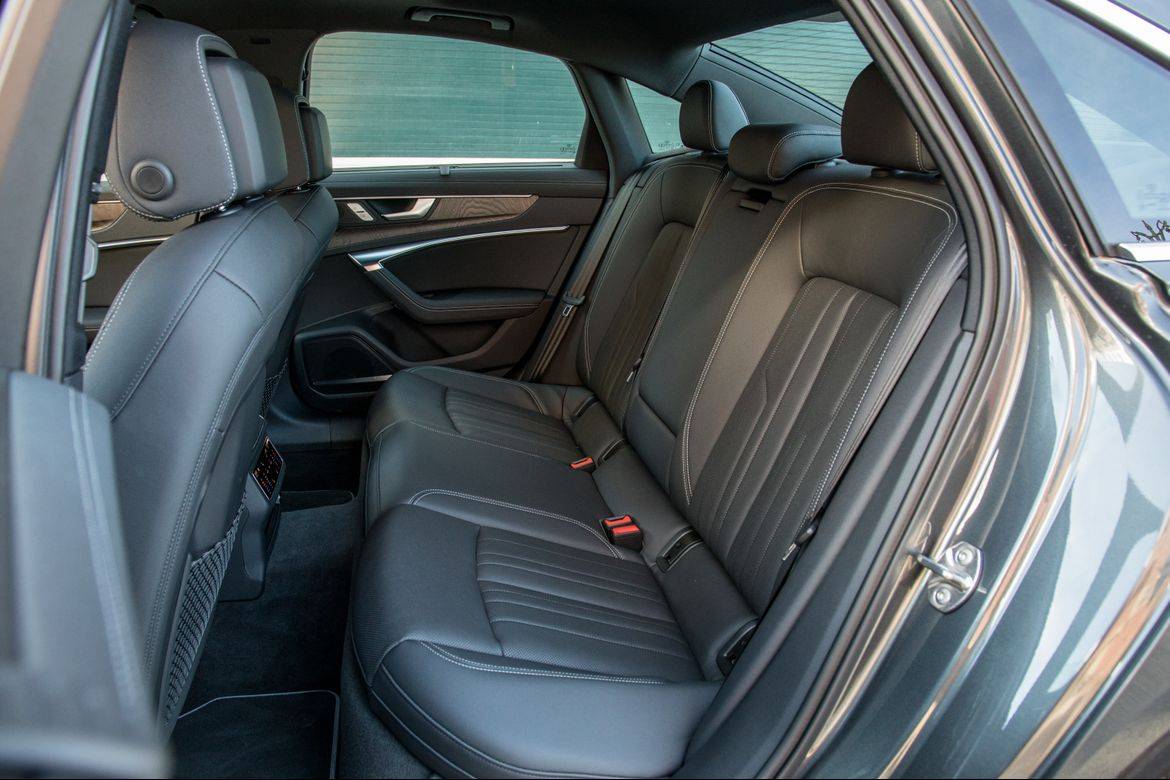 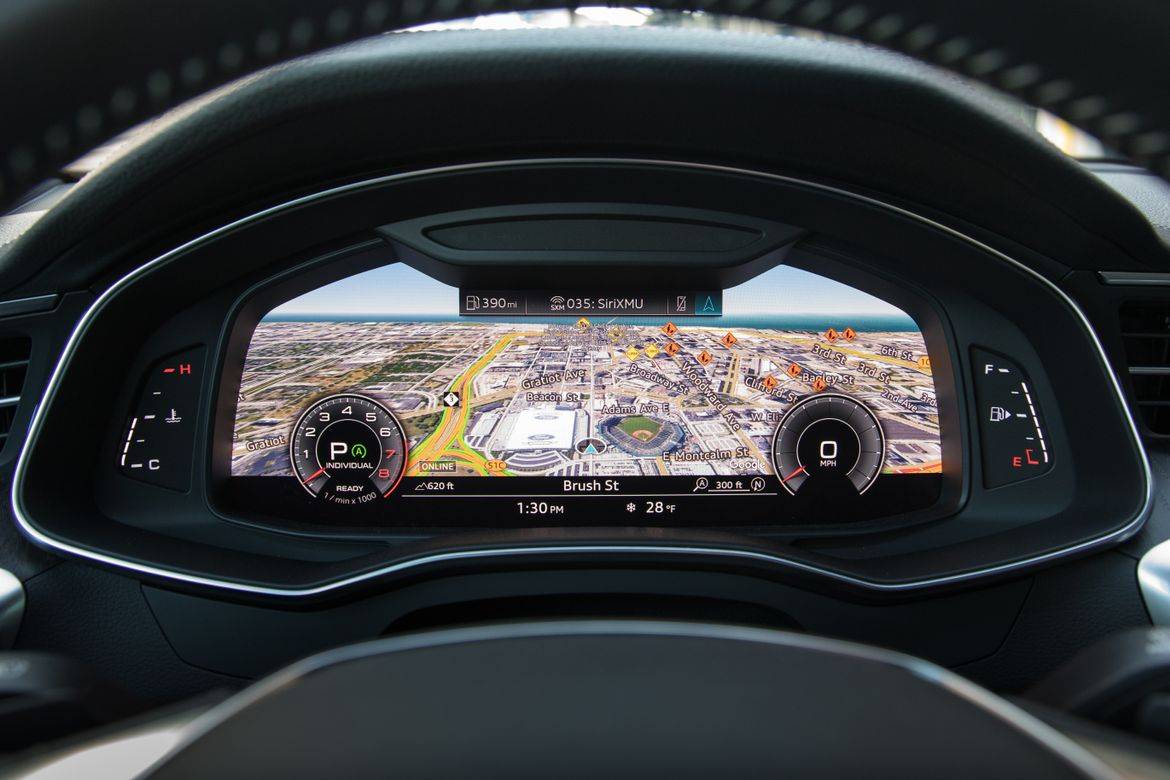 There’s decent room in the average-sized trunk if you plan on carrying some luggage with your passengers; the A6 has 13.7 cubic feet of cargo space — about the same as the Mercedes-Benz E-Class. It’s considerably less than the 15.3 cubic feet in the Genesis G80 or the 18.7 cubic feet in the BMW 540i, but all the German brands have a standard split-folding rear seat to expand that cargo area. 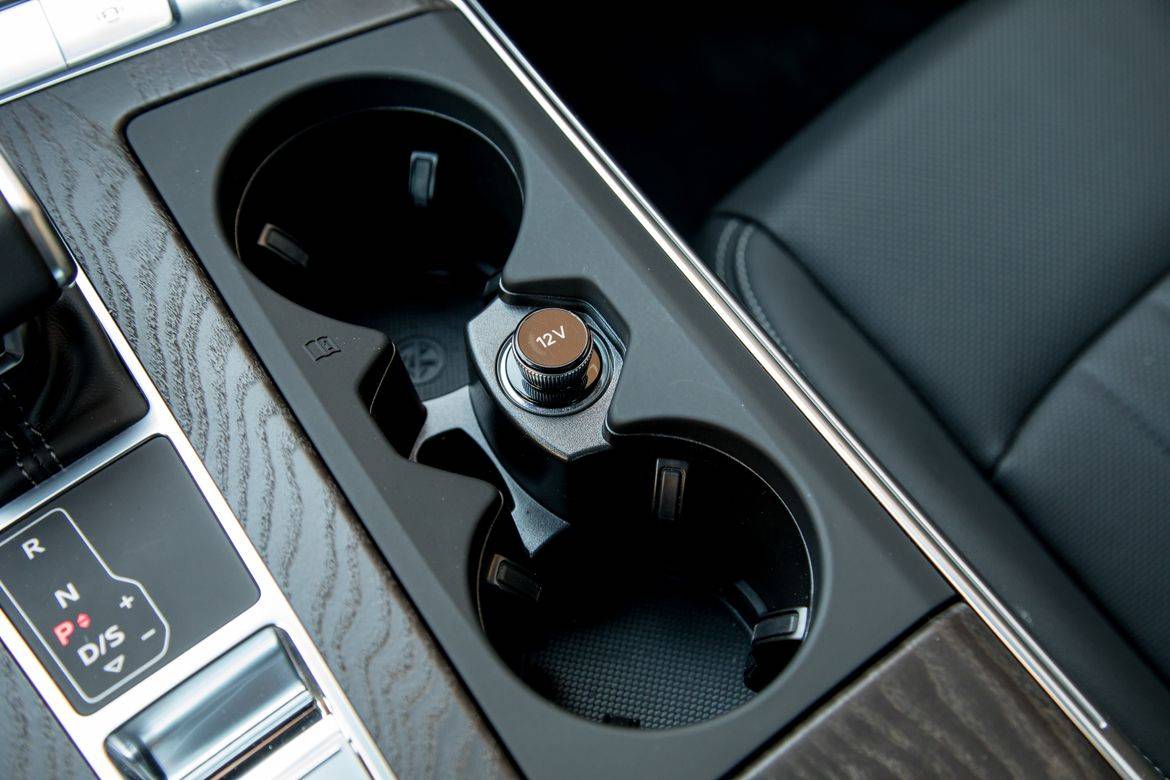 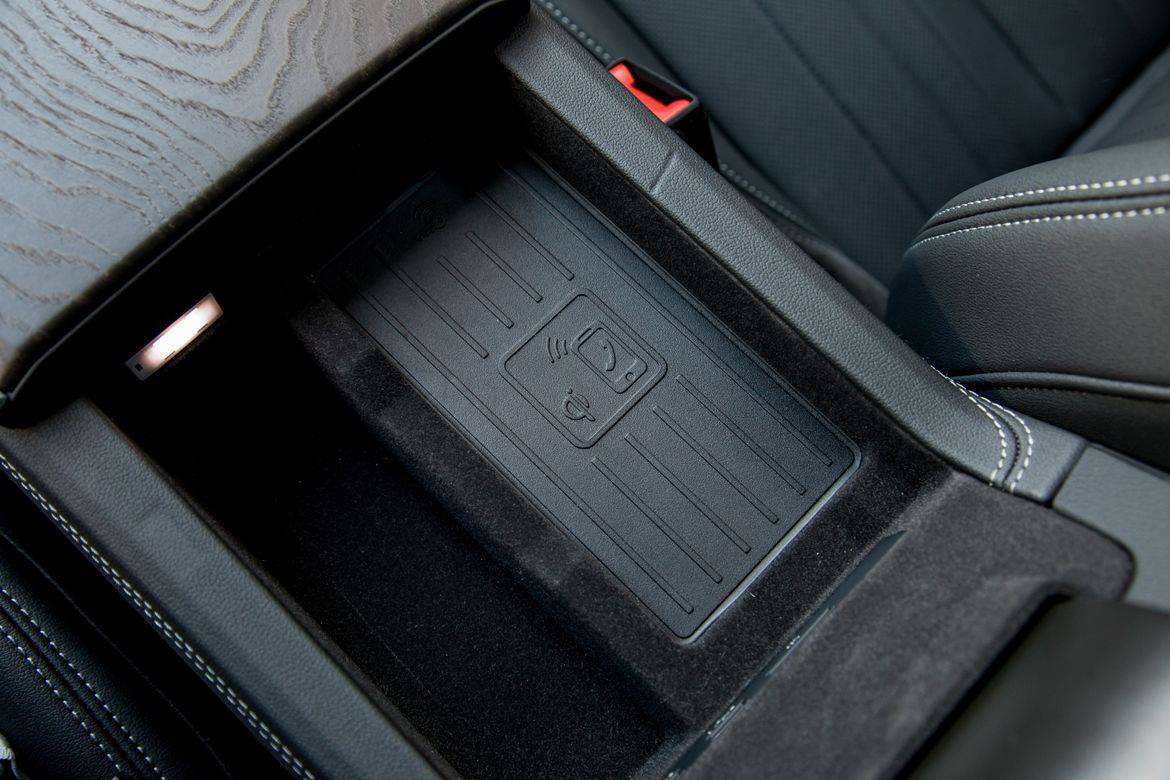 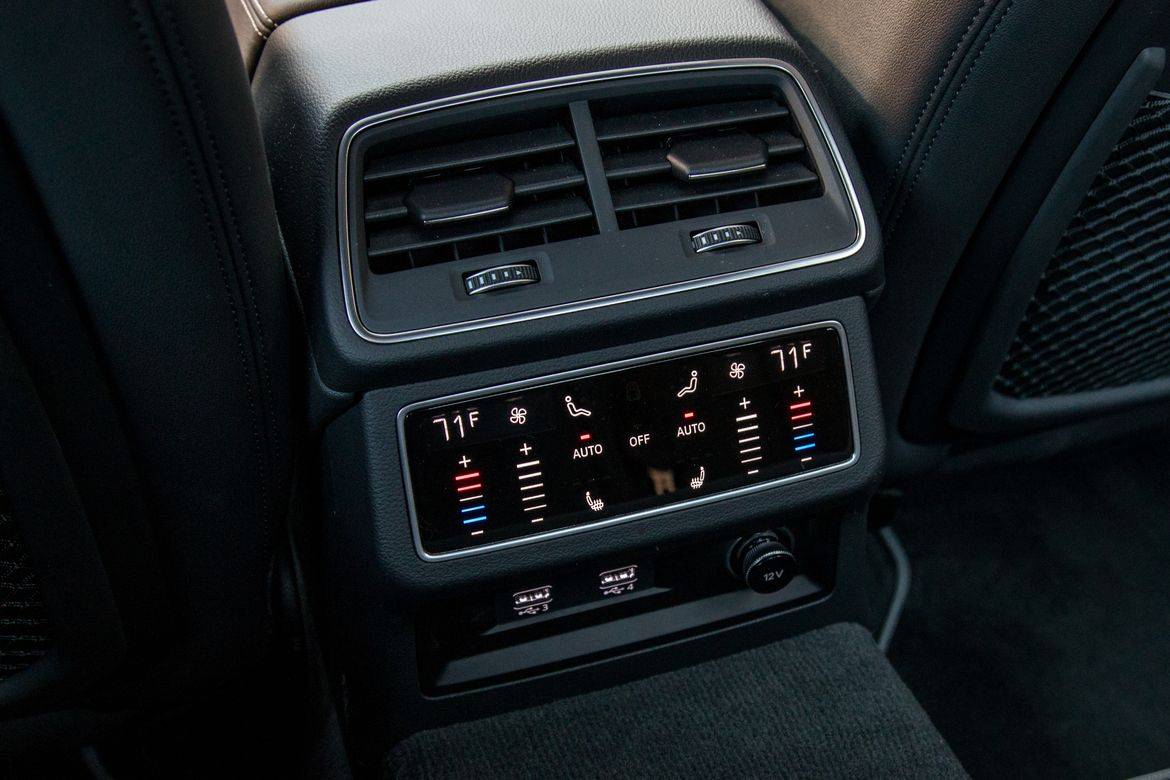 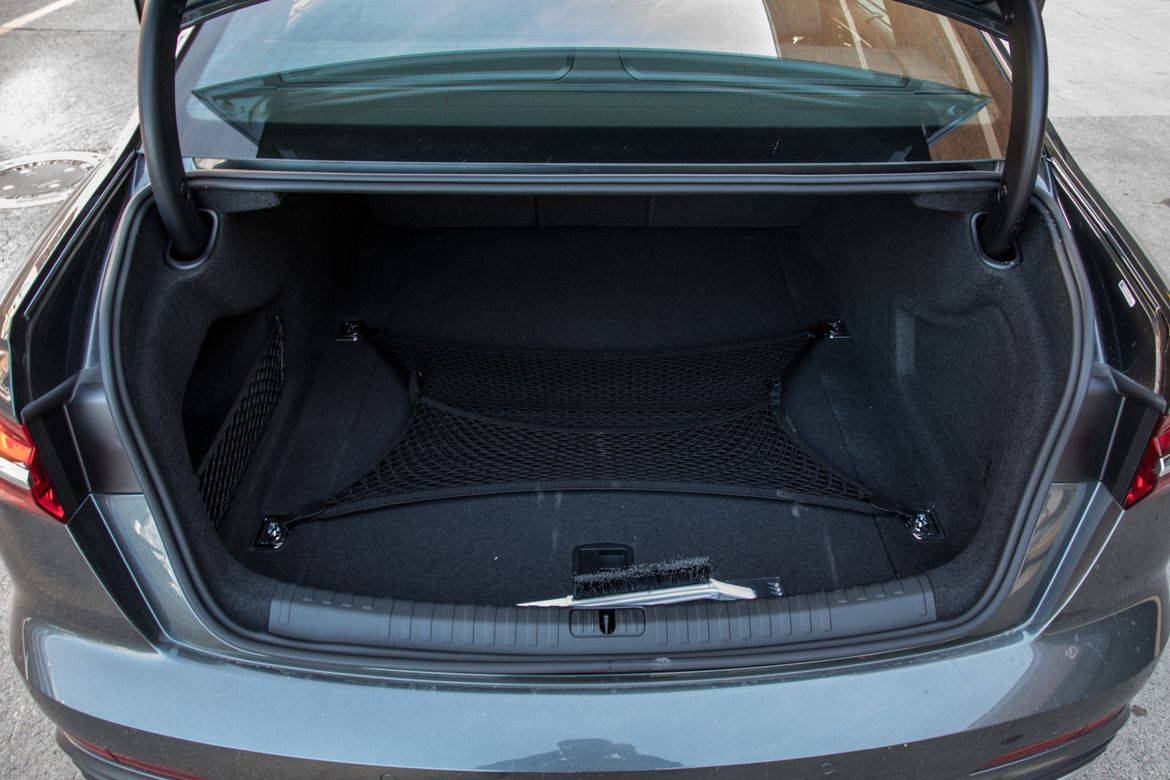 The 2019 Audi A6 was crash-tested by the Insurance Institute for Highway Safety and won the coveted Top Safety Pick Plus award, garnering top ratings in all categories, including crash avoidance and mitigation. The A6 includes the basic version of Audi’s forward collision alert with autonomous braking, operating only in low-speed mode for urban situations, but it’s enough to qualify it for that IIHS rating. (The A6 has not yet been rated by the National Highway Traffic Safety Administration.) A full driver assistance package that adds full-speed automatic cruise control with stop and go is a $2,750 option, while the fancy dancing LED headlights on my test car were part of an $8,200 Prestige Package.

For 2019,  the new standard four-cylinder engine lowers the sedan’s base price to $55,095 (all prices include a destination charge). The V-6 is competitive with the rest of the field for its power level, coming in at the old base model’s starting price of $59,895. Like most German luxury cars, if you want bells and whistles — and sometimes even the basic equipment that often comes standard on non-German luxury cars — you have to start checking option boxes. Options on my tester included that Prestige Package (including a 10.1-inch touch-response navigation screen, virtual cockpit gauges, Bang & Olufsen premium audio, LED headlights, four-zone climate control and much more), the Driver Assistance Package, the Cold Weather Package, a 20-inch Sport Package (upgraded to the additionally optional 21-inch wheels) and Daytona Gray paint, all for a grand total of $74,090.

Competitors from BMW and Mercedes-Benz are evenly matched in terms of price and equipment, though both the 5 Series and E-Class also offer a lower-priced four-cylinder model: the BMW 530i and the Mercedes-Benz E300. If you want something less expensive but still loaded with luxury features and equipment, the Genesis G80 is an intriguing choice; no longer badged a Hyundai, the Genesis brand is its own standalone luxury marque now, and it’s set to get an increasing number of new products. Compare the competitors here.